We used to think of the Golden Globes as the beginning of awards season, but what if it’s the Emmys? Just like back-to-school festivities, people have just had a long and (theoretically) restful summer, they’re probably a lot tanner than usual, and they’re excited to shake up the class with some brand-new fancy duds. The question is, then, who got an A and who needs improvement? Here are some of our picks. 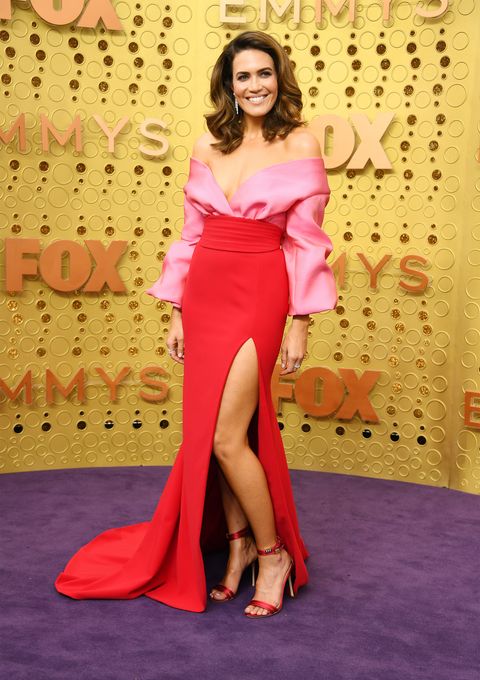 This was the most unexpected trend of the night: By our latest count, five actresses arrived in floaty gowns that fused red and pink fabric, a very on-the-nose valentine to TV. We had a hard time picking one we thought was flawless, but we’re giving the win here to Mandy for leaning allll the way into 1980s nighttime soap realness. In this, she could hurl a martini at her enemy, ruin a wedding, or slip it off and step into a bathtub while someone else’s husband gawks. When This Is Us ends, maybe she should consider this as a career move. 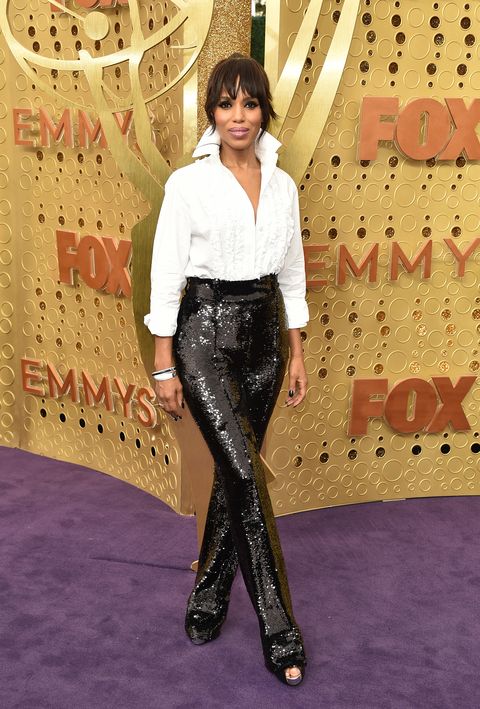 It’s unusual to wear separates to the Emmys; it’s even more unusual to wear a white oxford to an awards show, although Sharon Stone once taught us all that when done correctly, it’s unforgettable. And this iteration is so crispy, so sexy, so modern, so damn good. 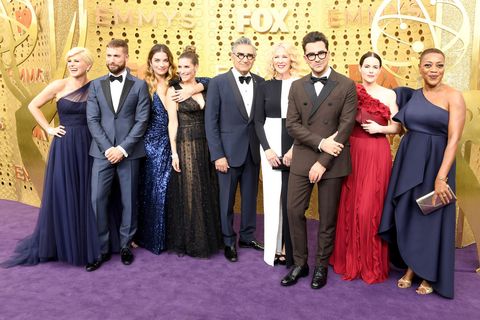 This is quite possibly just our favorite cast, period, but Schitt’s Creek took five long seasons to get Emmy recognition, and we’re beyond pleased to see them all sparkling so brightly on the red carpet. All these dishy Canadians in one shot is just another compelling reason to investigate moving there. 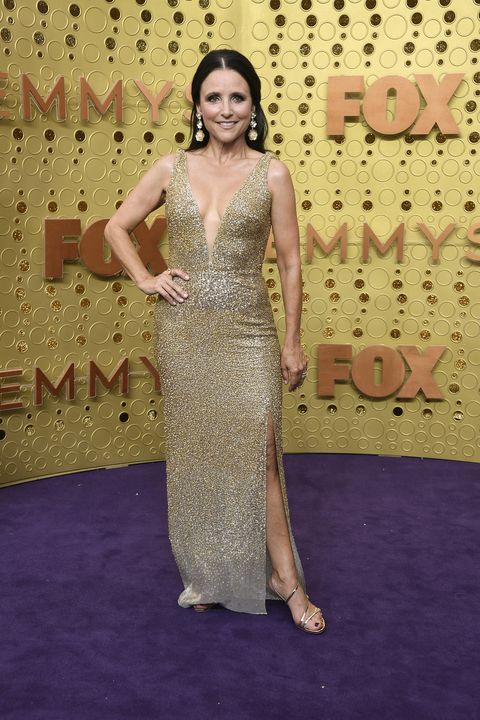 She didn’t win for Veep—this time, anyway—but Julia is victorious in pretty much every other aspect, including the way she’s carrying this sexy gold sequined gown. So she didn’t break the all-time performing Emmy record tonight? Big deal. She’ll smash it with whatever she does next, and we can’t wait. 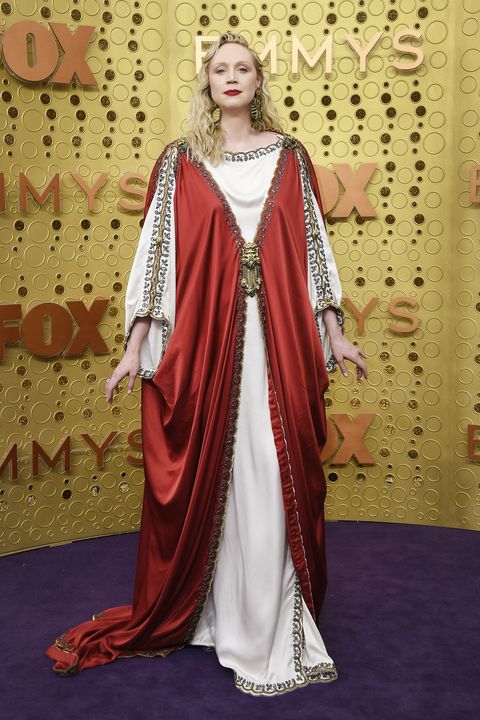 Or should we just call her Guinevere? 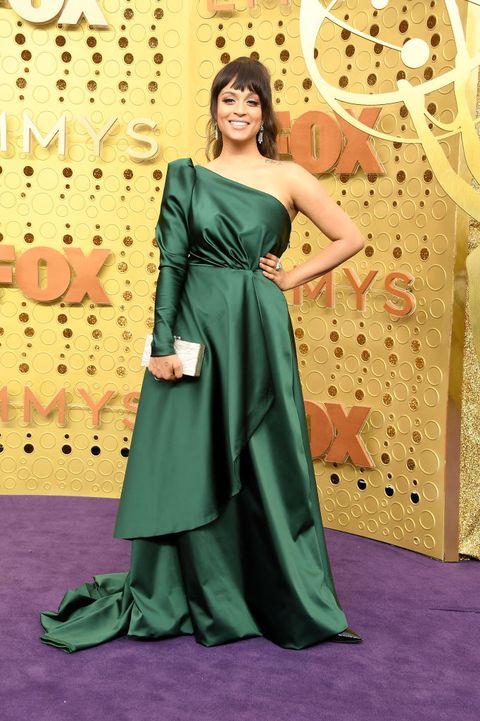 That emerald hue is wonderful on Lilly, who looks faintly like the prom queen of TV we hope she becomes: It’s a big deal that a bisexual woman of color is breaking into the traditionally very white and male world of network late-night shows, and hopefully she’ll come back in future years as a nominee herself. 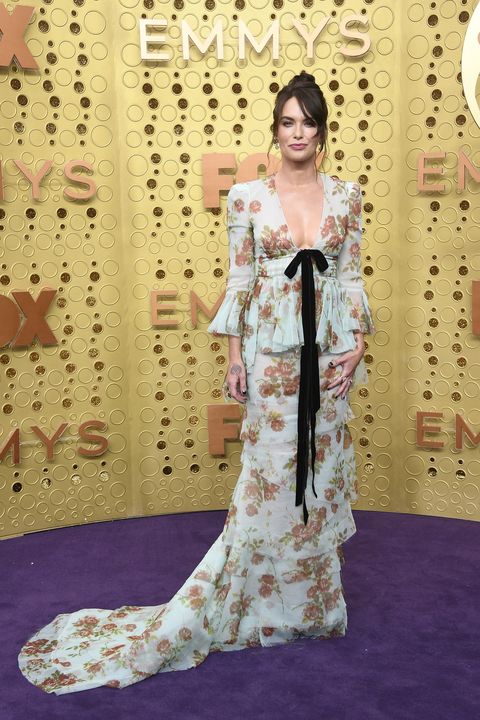 Warrior queen Cersei would rather die than show up anywhere in something this floaty and floral. However—SPOILER—Cersei did in fact die, so we commend Lena for swinging so far in the other direction, neatly reminding us all that she’s not actually a cold-hearted snake, even if she played one on TV. 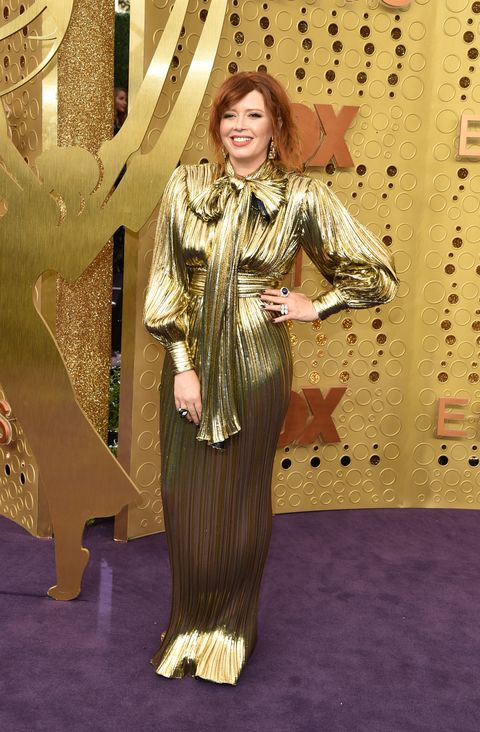 Natasha has really been leaning into some glitz, and this almost vintage-looking gold Gucci is shimmery and sexy and saucy in a way that her old all-black wardrobe never showcased. Maybe she and Mandy Moore can star in that soap opera together. 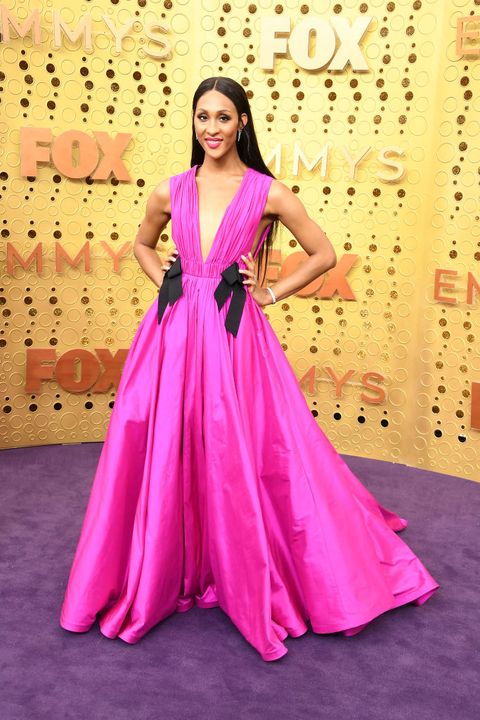 Mj, of Pose, talked very enthusiastically about wanting her dress to be a sharp, angular, precise pop of color, telling E! that this night represented the first time she’d been truly taken seriously and so she sought a gown that would give that its due. Mission heartily accomplished: She looks fantastic. 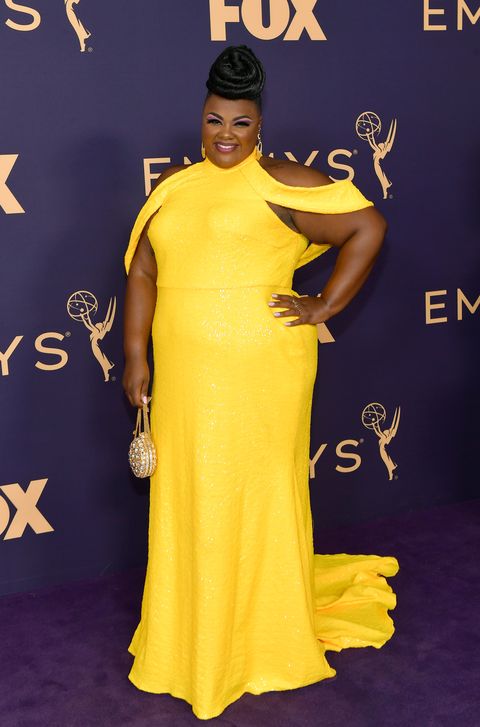 Nicole is perfect in this canary sparkler. We might even go so far as to say she…wait for it, WAIT FOR IT…nailed it. 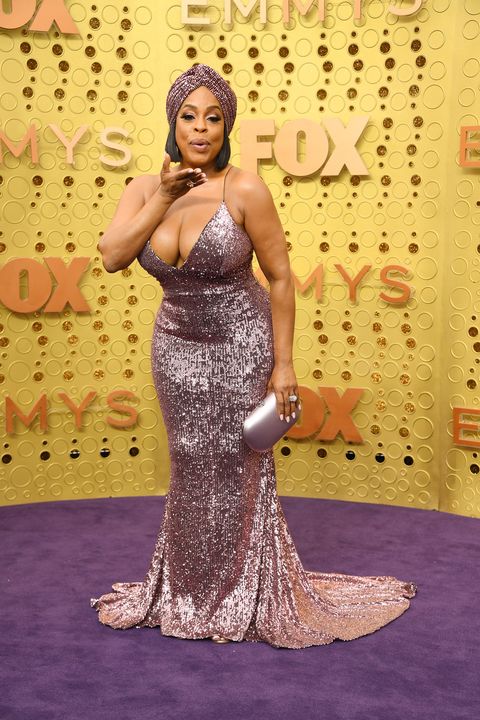 When she was interviewed on the red carpet, Niecy apologized in advance if one of her boobs popped out (it did not). Niecy has never shown up at an event looking less than the bodacious babe she is, and she definitely wasn’t going to end the trend this year. Bonus points for that great sparkly headpiece. 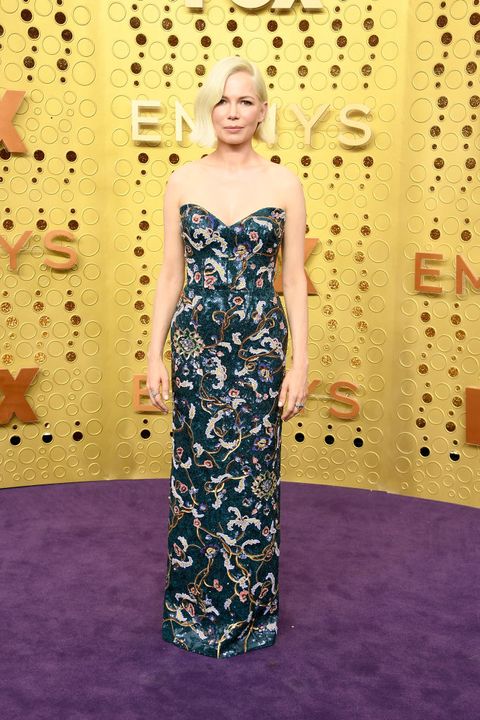 This might be a personal best for Michelle Williams, whose partnership with Louis Vuitton has tended toward the twee. The pattern is gorgeous, the cut is simple but stunning. She’s never looked better. It’s the perfect dress to win in; thank goodness, she did. 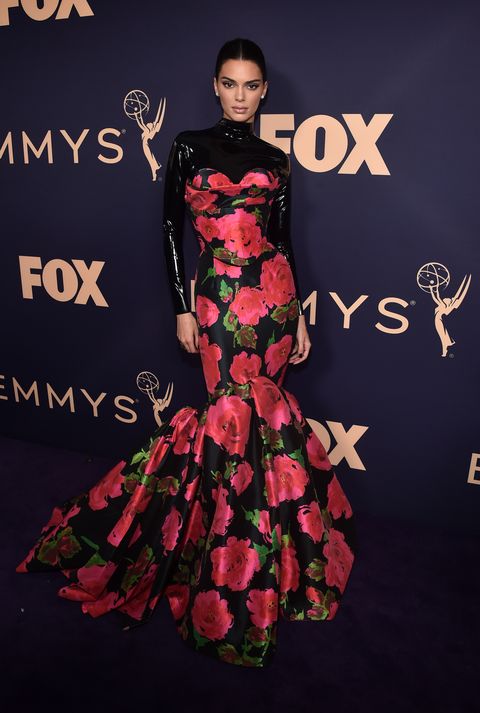 This red carpet was, all things told, quite pretty, but a great many people played it fairly safe. Not Kendall. This is fascinating and fun and really bold on her—and, not for nothing, probably extremely sweaty in L.A.’s weather conditions on Sunday. A round of applause for trying this—both for pulling it off sartorially, and actually physically pulling it off later. Latex gets sticky. 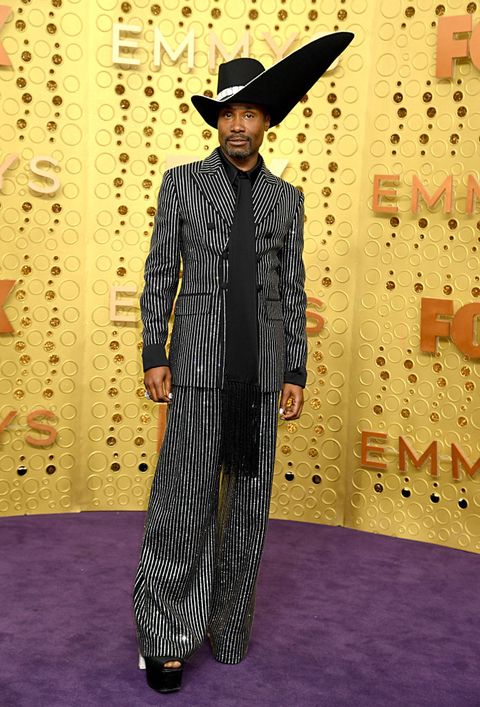 It’s a statement of how very dramatic Billy Porter often looks on a red carpet that our first take on this look—which involves 100,000 crystals!—was, “Oh, sort of understated on Billy tonight.” (In our defense, this is a person who was carried into the Met Gala on a golden litter.) The good news is, it proves Billy is just as much a fashion plate when he’s “relaxing” as he is when he’s got it turned up to 11. 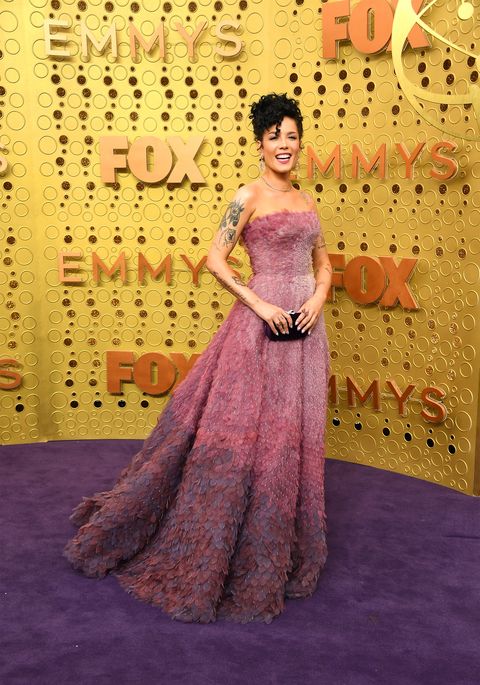 You might look at this and wonder how, exactly, this qualifies as a makeunder, but this is Halsey we’re talking about here. She once wore a belt as a shirt, and the last time we saw her in public, she was wearing a pleather loincloth-dress. By those standards this is understated—and by any standards, it’s glorious. 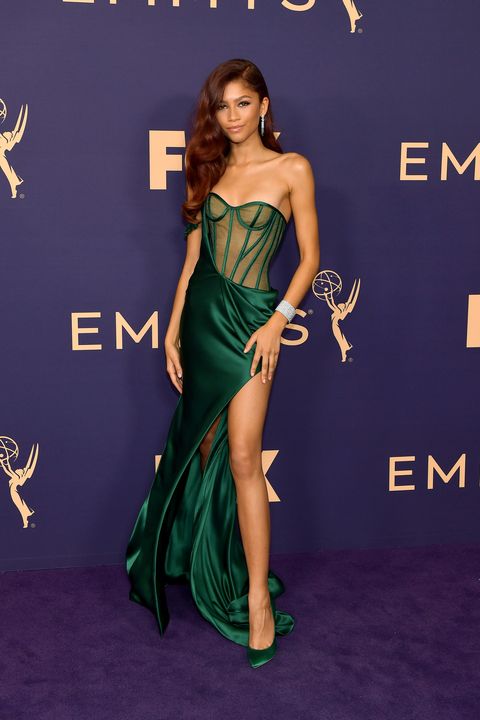 We are generally not fans of gowns with this much visible boning—finish your dress!—but we cannot deny that Zendaya still looks stunning in it. She should come with her own “Don’t Try This At Home” warning. 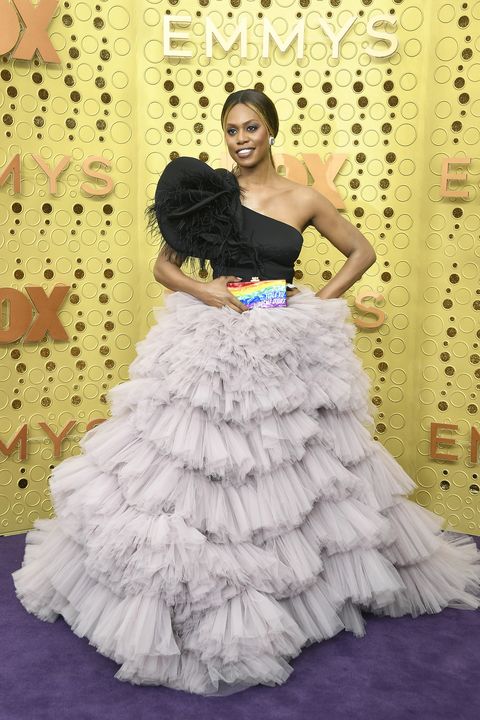 We don’t love Laverne’s ruffled gown—it’s sort of overwrought—but her custom Edie Parker bag is exceptional, so who even cares about the dress? On Oct. 8, the Supreme Court will hear arguments in regards to whether LGBTQ workers are protected against workplace discrimination; Laverne’s date was Chase Strangio, the ACLU lawyer who will be arguing the case. Let us put to rest once and for all the idea that fashion is synonymous with frivolity: Laverne is using this platform to raise awareness about something essential, and in our book, that makes her best-dressed no matter what she’s wearing.