El Espace is a column dedicated to news and culture relevant to Latinx communities. Expect politics, arts, analysis, personal essays and more. ¿Lo mejor? It’ll be in Spanish and English, so you can forward it to your tía, your primo Lalo or anyone else (read: everyone).

In digitizing The New York Times’s photo archives, one of my colleagues, Jeff Roth, came across some never-published photos of the founders of the Nuyorican Poets Cafe on Manhattan’s Lower East Side. Their subjects sought to build a creative, social space in the city for Puerto Ricans, where patrons could bear witness to what the writer David Vidal called “a new, intensely cathartic poetry that was born on New York City's streets.”

The cafe is frequently packed on Friday nights. Outside, long lines of people wait to get into the weekly spoken word competitions, and many of the young faces in the audience and onstage are black or brown. For many spoken word performers of color — especially those of Latinx and black descent — the Nuyorican Poets Cafe is what the Comedy Cellar has been for stand-up comics: a place to cut their teeth and test the resonance of their work in front of a live audience.

It’s come a long way from its humble beginnings in a poet’s living room.

In the early 1970s, Miguel Algarín, born in Puerto Rico but raised on the Lower East Side, began inviting other Nuyorican poets to his apartment on East Sixth Street for readings and performances. Algarín and his contemporaries, including Miguel Piñero, Pedro Pietri and Lucky CienFuegos, were part of a growing artistic scene in what was then a primarily Puerto Rican neighborhood, drawing on their identities and daily struggles for their work. The salon quickly outgrew Algarín’s living room, so he and a few other artists began renting an Irish bar down the street to fit more people. In 1981, they bought their current building on East Third Street and, after a lengthy renovation process, formally opened it to the public in 1990 as a space for Nuyorican poets to experiment and hone their craft.

The photos, taken in 1976 by Paul Hosefros, show the excitement of the nascent collective as it expanded into its first storefront. 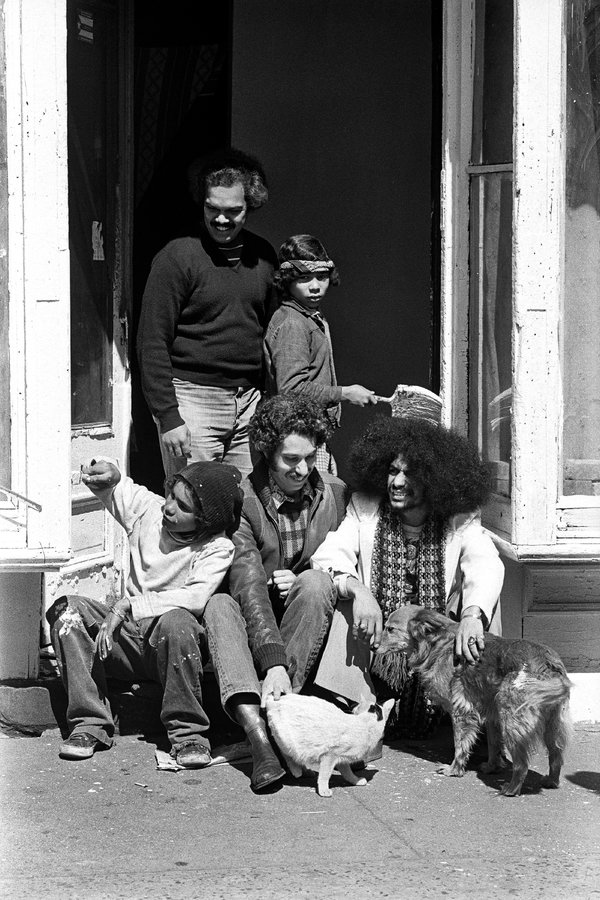 “Many of the founding artists and those who gravitated toward the group in the early days were informed by and active in a version of poetry that was much less academic, much less literary, much less elitist than many of the incarnations of poetry that existed in the ’60s and ’70s,” said Daniel Gallant, the cafe’s executive director, adding that even in its earliest days, it produced “poetry that evolved into and through injections of music, movement, theater, film and collaborative experience.”

That multidisciplinary, experimental spirit lives on today, and a number of award-winning one-person theatrical shows have evolved from spoken word performances developed there. Sarah Jones’s 2005 show “Bridge and Tunnel,” which won a Tony Award, and Elaine del Valle’s 2014 “Brownsville Bred” are standouts.

The Dominican-American poet Elizabeth Acevedo, who won the 2018 National Book Award for Young People’s Fiction, said she gave her first performance at the cafe when she was 15 and was only vaguely aware of “this important poetry place downtown.” “I did a rap song,” said Acevedo, now 30. “I knew music. I knew bolero songs and church songs and hip-hop. That was my origin.”

Caridad De La Luz, a Nuyorican poet who first performed at the club in 1996 and now hosts the Monday night Open Mics, also said she had only performed music (mostly Mary J. Blige covers on her college campus) before arriving at Nuyorican. The cafe expanded her view of what a poem could be. “Poetry was just something you wrote in journals for therapy,” she said. “Then when you got to the Nuyorican it was like, ‘Oh there’s a mic, there’s a stage, there’s an audience that wants to hear these things.’ Out came the journal.”

Acevedo said there’s a sense of “walking into a lineage” of other Latinx spoken word performers at the cafe. “Even as the poets get younger, you feel that there’s something being passed down,” she said.

THE IMMIGRANTS WHO WORKED FOR TRUMP

Victorina Morales, an undocumented immigrant who worked at the Trump National Golf Club in New Jersey for more than five years, says she wasn’t the only who didn’t have papers. “The housekeeping supervisor frequently made remarks about the employees’ vulnerable legal status when critiquing their work, she said, sometimes calling them ‘stupid illegal immigrants’ with less intelligence than a dog,” wrote Miriam Jordan.

AFRICAN-AMERICAN, DOMINICAN OR BOTH?

In 1824, more than 300 African-Americans (many of them freed slaves) chartered a boat to Samaná in the Dominican Republic. Read about how their descendants are preserving the history of those individuals through the oldest church in town.

WELLNESS ‘FOR THE CULTURE’

“How can people who have experienced systemic economic and social oppression feel wellness in their lives?” asks Annya Santana, the founder of the beauty company Menos Mas. She’s got some tips.

Get into Kat Lazo’s Barrio U.S.A. series with Thrillist, where she’s touring Latinx subcultures across the country, including (so far) Chinese Latino fusion cuisine, the drag scene in Miami and barber battles in New York City. A personal favorite is her exploration of rumba, a Cuban style of dance and party.

Do you have suggestions for El Espace? Want to receive it as a newsletter? Let me know: [email protected]