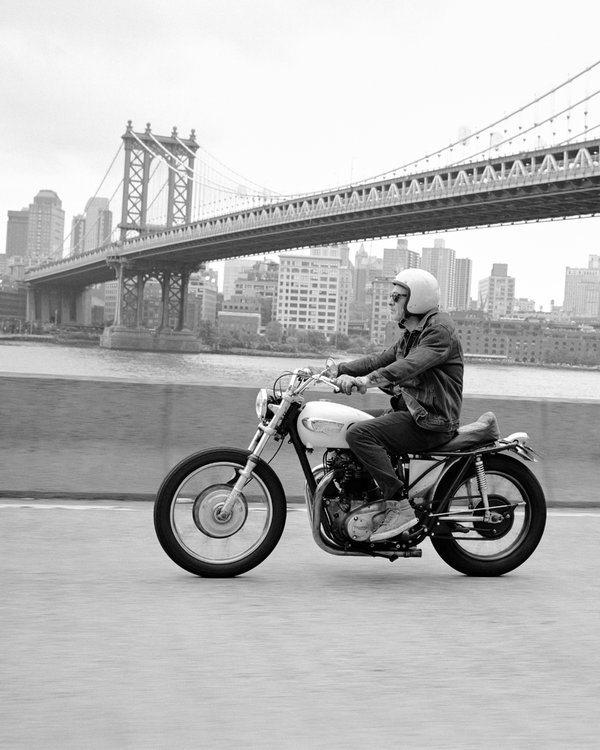 To love motorcycles is to love some measure of suffering. Hugh Mackie knows this. He has had the smashed collarbone, cracked ribs, cracked shoulder blade and broken thumb to prove it.

“I can tell when the rain is coming,” he said in an interview earlier this year. As the barometer rises, so does the pain from those old injuries.

Like a lot of guys who ride, he lives by intuition: You can’t think your way out of an unexpected pothole or a hairpin turn when riding through New York City.

To call Mr. Mackie, 61, a dying breed is probably an exaggeration, but maybe not here. Nestled between Avenues C and D in the East Village of Manhattan, his motorcycle garage, Sixth Street Specials, is among the last in the borough, a vestige of a neighborhood that scarcely resembles its past — and of an iron-horse culture that the city seems determined to throttle.

There are many ways to get around New York in 2019, though not all of them beckon. The subway is broken. Clunky CitiBikes throng the bike lanes and bridges, and now they have zippy Revel mopeds to compete with on the road. Cars are a pain to park.

The bus is … fine, if it goes where you need. Motorcycles have always come with their own headaches, but now those headaches are worse.

“Now, you get ticketed and towed relentlessly, no matter where you go, so there’s no advantage in having a bike anymore,” Mr. Mackie said. You might as well walk.

Mr. Mackie, who is Scottish, opened the garage at this location back in 1986, about five years after moving to New York, and he is still here, servicing, tearing down, building, rebuilding and customizing British bikes. His apartment is in the back. His wife lives there, too. The sign whispering the shop’s existence is so inconspicuous that you would never notice it if you didn’t already know it was there.

Inside, one glimpses an East Village that teemed not only with painters and beat poets but also with sidewalk mechanics and motorcycle gangs. A freelance mechanic comes in to tinker. A bumper sticker reads, “Giuliani is a jerk.” A five-foot-tall painting sits just inside the doorway, depicting a flaming skeleton, a souped-up police car and a white-hot swirling vortex in the sky. (I didn’t understand it either.)

There’s a particular kind of yellowish film that coats the walls and windows of an old garage; it’s like stepping into a sepia-tone photograph. I grew up hanging out in my grandfather’s garage in Indiana. The warm, familiar smells of gasoline, smoke and dust, of scorched oil and chemical-soaked rags, felt like home.

Xavier Bessez, 30, rolled up to Sixth Street on a 1964 Triumph because a pin had fallen out of his brake caliper while riding. That’s dangerous. On the way, a cop pulled him over for not putting both feet on the ground at a stop sign.

Mr. Bessez said he had been intimidated the first time he came here. “This place was too cool for me to come in,” he said. “I felt nervous, you know? And then I got to know the guys, and I’ve been coming ever since.”

On Fridays, Mr. Mackie said, the place often fills with guys like Mr. Bessez: fellow enthusiasts for British bikes who gather just to hang out. He pointed to a large clock in the back; etched beside the number 6, faintly, was the word “beer.”

There used to be more places like this in Manhattan: four or five in the East Village, Mr. Mackie guessed, and maybe a dozen more farther downtown. Now they’re in North Brooklyn. Some resemble fashion boutiques, tailored to the tastes and money of upwardly mobile guys who want the glamour but not the grease. Mr. Mackie calls them “credit-card customers.”

But times were different when Mr. Mackie first opened in a small, dank section of the basement. “This entire area was just completely burned out,” he said of the East Village in the ’80s. “Vacant tenements. Empty lots. Junkies. Hos. Just everything you can imagine in a neighborhood that has been evacuated. We were the first kind of, like, positive thing on this block for a long, long time.”

Lot by lot, the neighborhood changed — fewer addicts but also fewer artisans. As auto-parts stores vanished, so did the sidewalk mechanics, the stitched-together vehicles. And with them, something of the D.I.Y. spirit.

“By getting rid of those auto-parts stores, they completely cleaned the whole street work in the city,” Mr. Mackie said. “That was just gone overnight.”

A garage like Mr. Mackie’s, which sits on a residentially zoned block, is allowed because its certificate of occupancy was grandfathered in from before the 1961 Zoning Resolution, which implemented much of the city’s current zoning.

If someone tried to open a garage next door today, the New York City Department of Buildings wouldn’t issue a certificate because the block isn’t zoned for it. Most non-riverfront property in Manhattan isn’t. A survey of zoning map changes indicates that only a few blocks east of Bowery and south of 14th Street ever allowed for new garages after 1961.

Once an auto shop is closed, it usually stays gone (and legally must stay gone if closed for two years). Better a high-value condo than a noisy, smelly motorcycle shop — with God knows what kind of riffraff hanging around.

The bikers are leaving too. In March, the Hells Angels sold their East 3rd Street clubhouse; they’d been there for half a century. Now there’s a Starbucks on the block, where you can sip lattes and read about them in eulogies like this one.

Starting in the Koch administration, Mr. Mackie said, things downtown started getting less fun. Stuff that bikers got away with in the ’70s and early ’80s was no longer O.K.

“Riding on the sidewalk, no helmet, unlicensed operator: I mean, my tickets went through the roof,” he said. “It cost thousands of dollars because I was a kid and stupid.”

Things have gotten tougher still under Vision Zero, Mayor Bill de Blasio’s initiative to reduce traffic fatalities, which began in 2014. I can attest. A few years ago, where I lived in Brooklyn, police officers seemed to overlook bikes parked on the sidewalk as long as they were covered and out of the way — a tacit compromise akin to drinking beer from a paper bag.

Yes, it was illegal. But bikers like me believed it was based on a mutual understanding that laws should not be flouted and that legally parked bikes have a tough time in a city where people park by feel.

Suddenly last year, my bike was towed three times. This year it was towed again. My bike wasn’t running, so I had to pay to tow it off the impound lot. All told, that single parking violation cost about $450.

I’ve heard similar stories, from mechanics, riders and my tow guy. It seemed like a trend; a spokeswoman for the police department confirmed my suspicion. From 2015 to 2016, motorcycle tows more than doubled citywide. After a tiny dip in 2017, they more than doubled again in 2018. Tows for cars held steady.

Walking through Mr. Mackie’s garage, I tried to take it all in. He was working on a Triumph that looked as if it were built for the apocalypse. A sun-bleached cow’s skull dangled from a hook in the pressed tin ceiling. Racing trophies crowded a front window that is not very easy to see through.

“That was one of those days when I didn’t make it home on the bike,” he said.

I returned home to find that my own motorcycle, which in recent months had cost me thousands and still didn’t run, had been knocked over for probably the dozenth time. Whoever did it had not left a note. But someone had placed my broken-off clutch lever on the seat: Usefulness? Exactly zero.

I went inside and ordered a replacement lever on Amazon. The fact that I had just been commiserating about these very sorts of mishaps with Mr. Mackie was not lost on me; neither were the implications of paying a company that was helping put guys like him out of business.