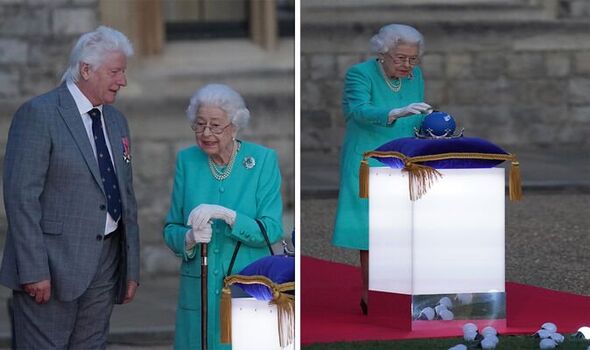 The monarch looked elegant in a teal outfit as she lit the Platinum Jubilee beacon at Windsor Castle. The Duke of Cambridge attended the beacon lighting at Buckingham Castle where Gregory Porter performed.

She wore her signature pearl necklace and earrings as well as white gloves to celebrate the Beacon lighting.

The Queen carried a black handbag as she touched the Commonwealth Nations Globe to light the Principal Beacon.

Flaming tributes will be lit in 54 Commonwealth capitals to celebrate The Queen’s Platinum Jubilee.

The Queen beamed as she joined members of her family on the balcony at today’s Royal celebrations.

She was accompanied by her pageantmaster Bruno Peek as dusk fell at the Castle for the ceremony.

The stunning principal beacon was lit up at Buckingham Palace as the Duke of Cambridge watched.

The principal beacon at Buckingham Palace was the Tree of Trees to represent the million trees planted in the Jubilee year.

The Queen had changed outfit since she appeared on the balcony where she wore light blue with diamante.

She wore a knee length blue dress coat designed by Angela Kelly, embellished with diamante for the balcony.

The gem detail continued down the front of the coat and she wore an elegant hat with a matching trim.

She also wore a pair of white gloves and a diamond brooch to watch the planes with her family.

The Queen was joined by members of her family on the balcony, including the Duke and Duchess of Cambridge and their family.

Meghan, Duchess of Sussex was also spotted wearing a navy outfit with a matching hat to watch from the window.

Sophie Wessex and Lady Louise both wore pretty pink outfits for the Trooping the Colour ceremony at Buckingham Palace.

This evening, beacons were lit around the world to celebrate The Queen’s Platinum Jubilee.

Beacons were lit all over the UK as well including in Edinburgh, at the Neasden Hindu Temple in London and in Glastonbury.

Buckingham Palace has confirmed the Queen will no longer attend the National Service of Thanksgiving tomorrow after experiencing “discomfort” today.

Other members of the Royal Family will attend the service tomorrow as the Jubilee celebrations continue.

Events will take place over the whole weekend as the UK marks the historic occasion.