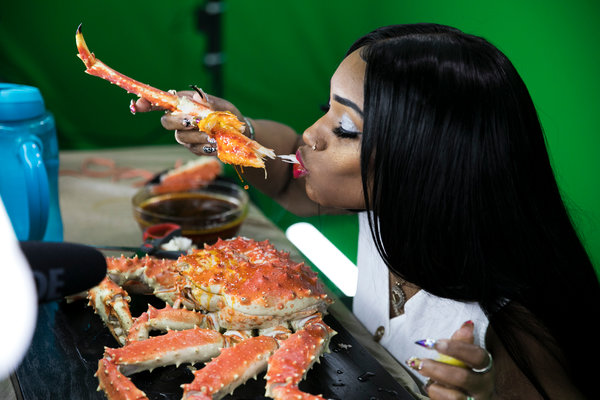 CINCINNATI — Most of us can probably agree that eating food is more enjoyable than watching someone else eat food. For one, it’s a basic human need. It also tastes good a lot of the time. Not to mention, people can be pretty gross when they eat, especially when they do so in over-the-top, finger-licking fashion.

Still, hundreds of thousands of people tune in each week to watch Bethany Gaskin binge-eat shellfish on YouTube.

Mrs. Gaskin, 44, has capitalized on the popularity of a food-video genre known as mukbang, which involves scarfing down, on camera, more grub than should rightly be consumed in a single sitting.

On her two YouTube channels, Bloveslife and BlovesASMR Eating Her Way, Mrs. Gaskin chats up her audience while eating king crab legs, mussels, lobster tails, hard-boiled eggs and roasted red potatoes. The videos, produced in her Cincinnati home, have made her a millionaire, she said. But getting into the business wasn’t about money; mukbang was more of a calling than a vocation.

“I think of mukbanging as a ministry,” Mrs. Gaskin said. “I didn’t consult with my husband before I quit my job. I knew this was it, and I quit by faith.”

The Spread of Binge Culture

Mukbang seems to have begun as an internet trend more than a decade ago in South Korea. The name is a mash-up of the Korean words for eating (“muk-ja”) and broadcasting (“bang-song”). Korean live-streamers often schedule their mukbang videos to align with dinnertime hours, so their viewers eating alone at home feel like they’re sharing a meal with a friend.

Viewers cite other benefits too. Watching the videos can serve as an appetite-curbing exercise. And for a certain subset, the sounds of a person eating foster an autonomous sensory meridian response, or A.S.M.R.; viewers derive pleasure from the sounds created by extra-loud crunching, slurping and lip smacking.

Craig Richard, 49, a professor of physiology at Shenandoah University and the creator of a website dedicated to the study of A.S.M.R., said that while the phenomenon is not medically diagnosed, people who enjoy A.S.M.R. experience a sensation of “sparkling brain tingles” while viewing “trigger” videos.

On a recent Tuesday, Mrs. Gaskin sat down in her home studio for a recording session with her son Dalvin, who is 25 and something of a protégé, and his friend Nicole. On the walls were plaques commemorating the day she reached the one-million-subscriber mark on YouTube, as well as a framed letter from Susan Wojcicki, the C.E.O. of YouTube.

Mrs. Gaskin began the show with a friendly singsong greeting: “What’s up my Bloveleez?,” a nickname she uses to refer to her viewers. Then she announced the night’s meal, elongating the vowels in “seafood boil” as a soccer commentator would when announcing a goal.

Before diving into her food, she said a brief prayer: “Heavenly Father, in the name of Jesus, I thank you for this food I’m about to receive. In Jesus’s name, I pray. Amen.”

The food was strategically positioned on a serving tray, with the most colorful items on top and accented by bright yellow lemons and corn on the cob. On the table in front of the tray were three glass bowls of Mrs. Gaskin’s homemade Smackalicious sauce. She wants to manufacture the spices used in the sauce so viewers can make their own.

Before taking the first bite of food, Mrs. Gaskin, Dalvin and Nicole briefly paused in front of the camera. They posed with a crab leg, and, while smiling, they sang the word “thumbnail.” After the photo, the real action began. Once Mrs. Gaskin dipped her food into her Smackalicious sauce, she took her first bite and closed her eyes as she chewed.

While nodding, she said, “Yup, umm hmm y’all, this is good.” She used slurping noises to indicate that something was juicy, followed by more head nods and “yup” utterances, as well as some vaguely orgasmic sounds. Dr. Richard said that these “mouth sounds,” in combination with Mrs. Gaskin’s “kind and positive disposition” and the abundance of the food, are textbook A.S.M.R. triggers.

In Mrs. Gaskin’s house, these kinds of table manners aren’t punished but celebrated. She and her Bloveleez slurp and chew noisily and, as she put it, “unapologetically.”

Perhaps the noisy and bad-mannered eating is off-putting for most, but the genre has a lot of devotees, if Mrs. Gaskin’s success is any indication. Her primary YouTube channel, Bloveslife, has 1.8 million subscribers, and on Instagram she has a following of nearly 900,000, one of whom is Cardi B.

Through advertising on her videos, Mrs. Gaskin said she has made more than $1 million, providing screenshots of a report from YouTube.

Before becoming a YouTube sensation, Mrs. Gaskin, who has an associate’s degree in early childhood development, owned a day care facility. After five years, she sold the business and used the money to pay off loans and leases. She then got a job making circuit boards for the military for a year.

In 2017, she started making Food Network-style cooking videos in her home kitchen and posting them on YouTube. “I’m a foodie,” Mrs. Gaskin said. “I’ve always liked to cook.”

“Then I did a mukbang, and people just went crazy,” she said. “I was like, ‘People want to see me eat, this is weird,’ and since they were easier to record, I just started doing mukbangs and all of a sudden, it just took off from there.”

Mrs. Gaskin’s first mukbang video featured a seafood boil and a largely improvised monologue. Viewers left comments like: “Smacking, finger licking, straight getting down!! Just being yourself…very cool stuff!” and “I’m allergic so I can’t eat it, but you make me wanna take the risk of eating a fried shrimp, just in front of the Emergency Room.”

“Her first 10 seafood boils were doing amazing, and I think it was the fifth one that was recognized by the ‘Stranger Things’ cast,” her son Darius, 18, said. His mother’s “overnight” success is something he is still getting used to, more than two years into her YouTube career.

Her husband, Nate, said that, in the beginning, he didn’t see how mukbang could help support the family.

“When she first started this, I thought it was just going to be a hobby that she wanted to do,” he said. “But when it took off, it really changed the dynamic financially for our family, because in a very short period of time, she was making more money than I was.”

Mrs. Gaskin’s success encouraged her husband to retire early from his 20-year managerial position at General Electric. Since then, Mr. Gaskin has been his wife’s full-time manager.

Her audience has now surpassed that of the YouTubers who inspired her to pursue mukbang. She said that in particular videos by Jasper Daze, who died in 2016 after complications with diabetes, helped her pick shellfish as her cuisine of choice. She dedicated her first mukbang to him.

Though the chatter around mukbang videos tends to focus on their benefits, there are also some who see reason for concern. Theresa Kinsella, 42, a dietitian, said in a phone interview that these videos “glorify overeating,” promote disordered eating and ignore the possible risks associated with overconsumption.

Before the recording, Mrs. Gaskin, a surprisingly petite 4-foot-11, said that mukbang hasn’t affected her health. She eats only when she films, she said, which is on average twice a day.

Some of her fans send gifts. Others describe her as their “medication,” Mrs. Gaskin said, adding that some cancer patients have thanked her for helping them regain their appetites.

Reese Anthony, 34, from St. Louis, Mo., is a fan of Mrs. Gaskin’s fried chicken and shrimp dipping videos, and says that A.S.M.R. videos have helped him with his anxiety and depression.

Mr. Anthony also alluded to the A.S.M.R. quality of Mrs. Gaskin’s screen presence. “The videos can put me to sleep and relax me,” he said. “It makes my hair on my arms stand up or gives me goose bumps because it’s so relaxing.”

Mrs. Gaskin credits her ability to appear authentic as a reason for her success. The other is her faith. “As long as my family and God are behind me, I’m good,” she said. “And I wake up happy every day.”

It wasn’t always easy. At one point during her childhood, Mrs. Gaskin said, she was homeless. “I know the struggle,” she said. “My mom would sacrifice eating to make sure me and my brother ate.”

That’s when Dalvin and Nicole walked through the door. Mrs. Gaskin asked, “Did y’all eat?”

Dalvin said they had not.

And the workday began.