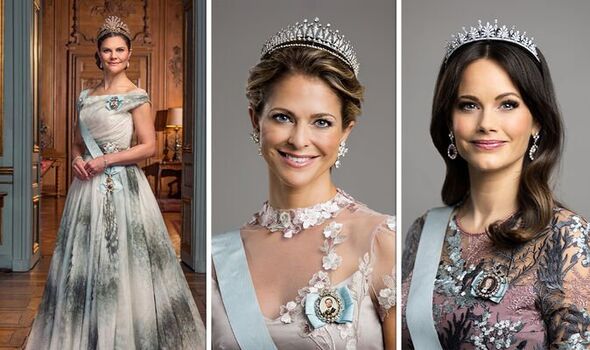 Crown Princess Victoria of Sweden stunned fans as she recycled an H&M dress from the Conscious Collection.

Crown Princess Victoria opted for sustainability and wore a beautiful light blue dress with a gradient effect she had already donned in 2015 to attend the wedding of her brother, Carl Philip.

She combined the dress with three bracelets by designers Ebba Brahe and one from Sophie by Sophie, pearl earrings and the Napoleonic Cut Steel Tiara.

The stunning diadem, which features feather and flower motifs, belonged to Queen Hortense of the Netherlands and was passed to the Swedish Royal Family by Queen Josephine until it reached Queen Silvia.

The beautiful diadem was a gift from King Carl Gustaf to his wife Queen Silvia, for their 10th wedding anniversary.

Princess Sofia of Sweden opted for the Jeslyn Embroidered Illusion Gown which she also wore in 2018 at the Royal Palace in Stockholm.

The beautiful purple dress featured a semi-transparent design and a floral pattern.

Princess Sofia combined the gown with the Palmette Tiara, which was a present from her mother-in-law, Queen Silvia.

This diamond tiara is a very special jewel for her as the royal donned it on her wedding day back in 2015.

The piece was originally given to Josephine by her husband Napoleon Bonaparte.

It was later inherited by her granddaughter Queen Josephine of Sweden and Norway, who had married into the royal household.

Many royal fans took to social media to comment on the Princesses’ looks.