On paper, Emily Capilouto and Dr. James Harb didn’t seem to have much in common when they connected through the dating app Bumble in 2018 and agreed to meet for a first date in Birmingham, Ala., where both lived.

But they did have lots of dentists in their family trees.

Ms. Capilouto, 33, whose parents both have degrees in dental medicine, planned to lean on that conversational crutch. But Dr. Harb, 32, who was then in his final year of dental school and has a father who is also a dentist, said he’d rather not talk about dentistry. He proposed a gambit of his own: red wine.

She nixed that topic with equal deftness.

“I have an allergy,” Ms. Capilouto said. “It makes my nose bleed. So both of our plans went out the window and we started talking about our other interests instead.”

And as they talked, it emerged that she comes from a Sephardic Jewish family while his is Palestinian and Melkite Greek Catholic. She is an only child and he is one of five. She graduated from Boston University, and he from the University of Alabama at Tuscaloosa, home of the Crimson Tide. But they did have graduate school in common: she received a degree in public health from the University of Alabama at Birmingham, where he was then completing a degree in dental medicine.

Cosmetic differences aside, it quickly became clear that they had the essential interest — each other — in common.

“It was a wonderful first date,” Dr. Harb said. “The conversation just flowed for three or four hours straight.”

A few dates later, after homemade pizza, the couple shared a first kiss on a football-watching Saturday.

“We were just watching the game and I don’t know why I remember,” said Ms. Capilouto, who is now the education and outreach director at the Mike Slive Foundation for Prostate Cancer Research in Birmingham. “That’s going to make us sound very Alabama, but it’s true.” 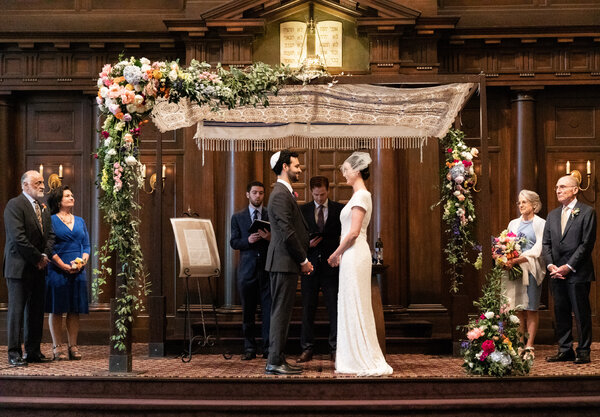 “The way that I remember it, it was something I had wanted to do but it was hard to find a good break in the conversation,” said Dr. Harb, an associate at Cullman Cosmetic & Family Dentistry, a private practice in Cullman, Ala. “You need a moment for that to land right. We were having too much of a good time.”

A few months later, Ms. Capilouto’s family joined Dr. Harb’s at a Christmas Eve celebration, and they found that his family made a Near Eastern pastry — bourekas — that her family had thought of as particular to their own tradition. The two began to realize that their cultural similarities were perhaps as significant as their differences.

“Since then we’ve just found that we have a lot of interests that are specific and similar,” Ms. Capilouto said. Both families have been rooted in the South for three generations, for instance, and both are devout.

“They are very religious, and although I’m also a person of faith, obviously, I’m of a different faith,” Ms. Capilouto said. “We assumed there would be more of these ideological differences than there actually were.”

In fact, as it turned out, the two ended up feeling that their divergent beliefs actually eased the meshing of their families, which was extremely important to both.

“We like to think we’re one of the lucky couples because our holidays that we want to spend with our families don’t overlap,” Ms. Capilouto said. “Our first year of dating, we went directly from Passover Seder dinner to midnight Easter mass. It’s really beautiful.”

The couple were legally married May 28 when a close friend of Ms. Capilouto, Ann Watford Todd, a notary public, solemnized their marriage certificate in accordance with Alabama law. The event took place at a cafe and home-goods store, General, in Birmingham.

“She just brought her notary stamp, so I guess, technically, we had a notarized document leaving the coffee shop,” Ms. Capilouto said.

The next day, on May 29, the couple had back-to-back ceremonies honoring each of their religious traditions. The Rev. Dr. Justin Rose performed a ceremony at Saint George Melkite Greek-Catholic Church, and Rabbi Adam Wright officiated at Temple Emanu-El, both in Birmingham. A total of 13 people attended the events, and they concluded the ceremonies with a dinner on the outdoor patio of a Birmingham restaurant, Chez Fonfon.