A SAVVY mum has transformed the dull kitchen of her new home into a stylish space for just £110 – by using sticky back plastic and paint.

Katy Tate, 32, wanted to temporarily freshen up the room, after buying the 1930s-era house in Durham in March last year and being quoted £4,000 for a new kitchen. 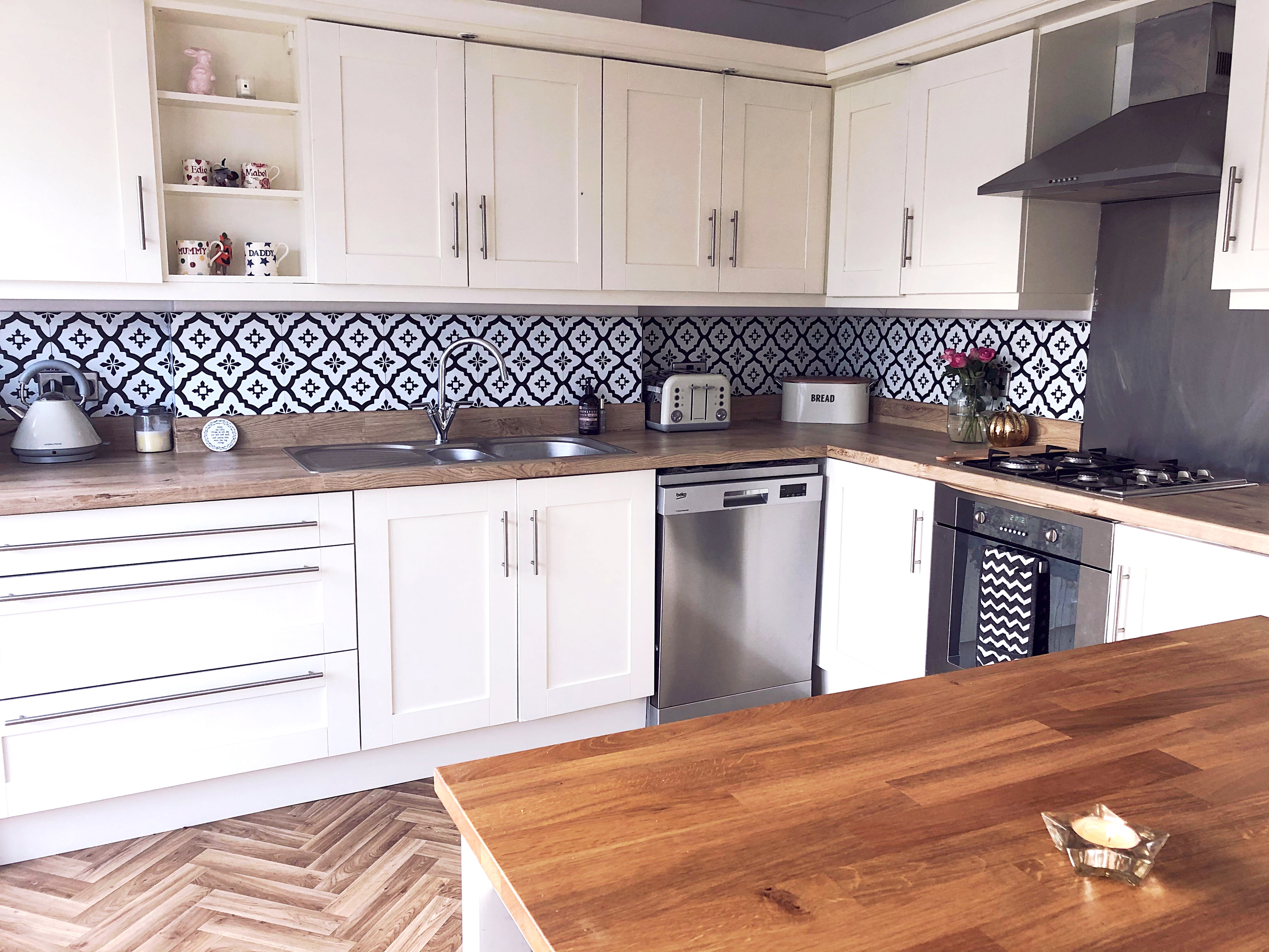 The mum-of-two teamed up with husband Jason, 32, to start the project last month, with Jason first knocking down the utility room wall to make more space in the kitchen area.

She then covered the grey splashback tiles in £30 vinyl designed for bathroom floors and wrapped wood-effect sticky back plastic around the kitchen counters.

The marketing manager said: “The brown and blue weren’t really to my taste and it was all quite dated – I just wanted to put my own stamp on it. 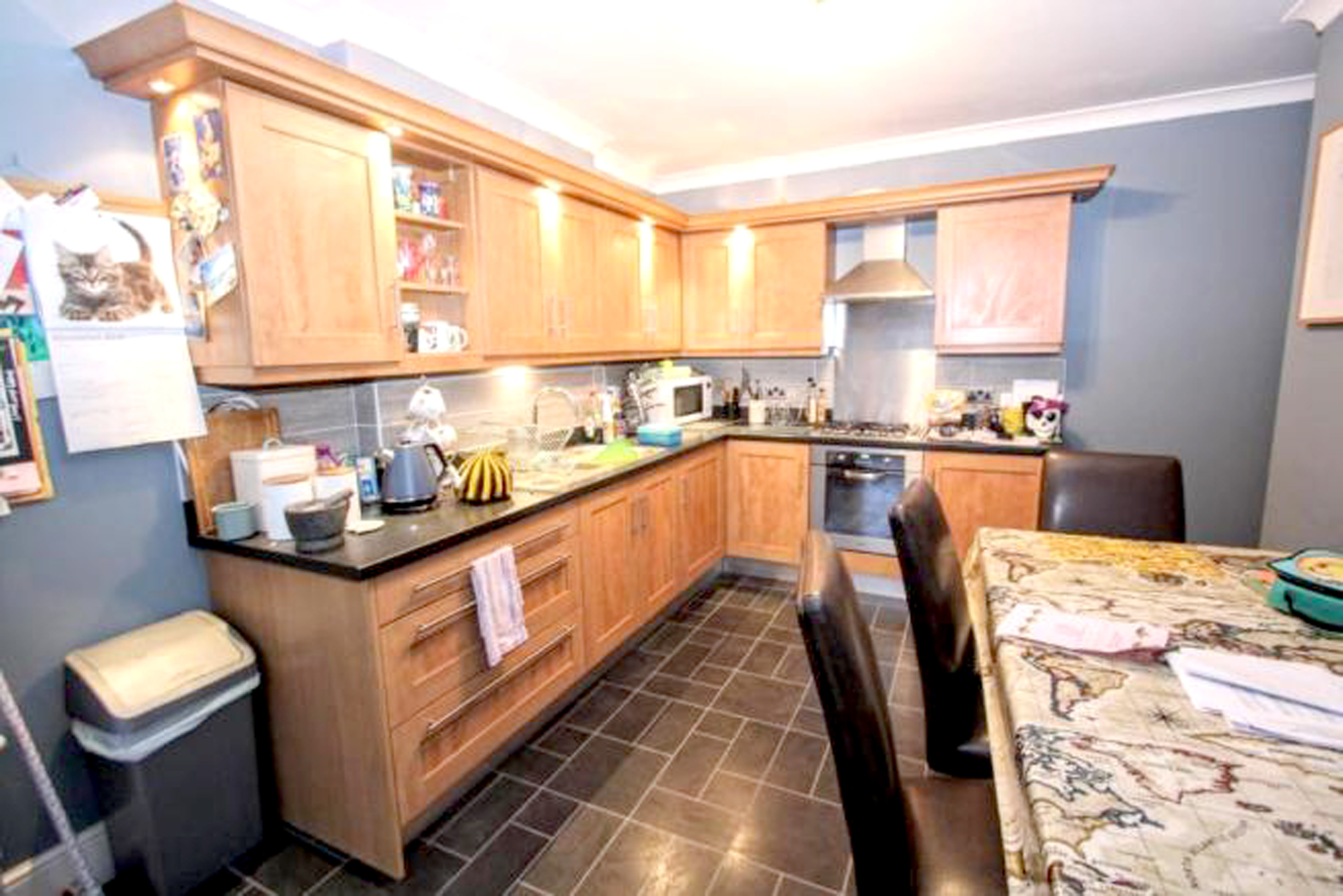 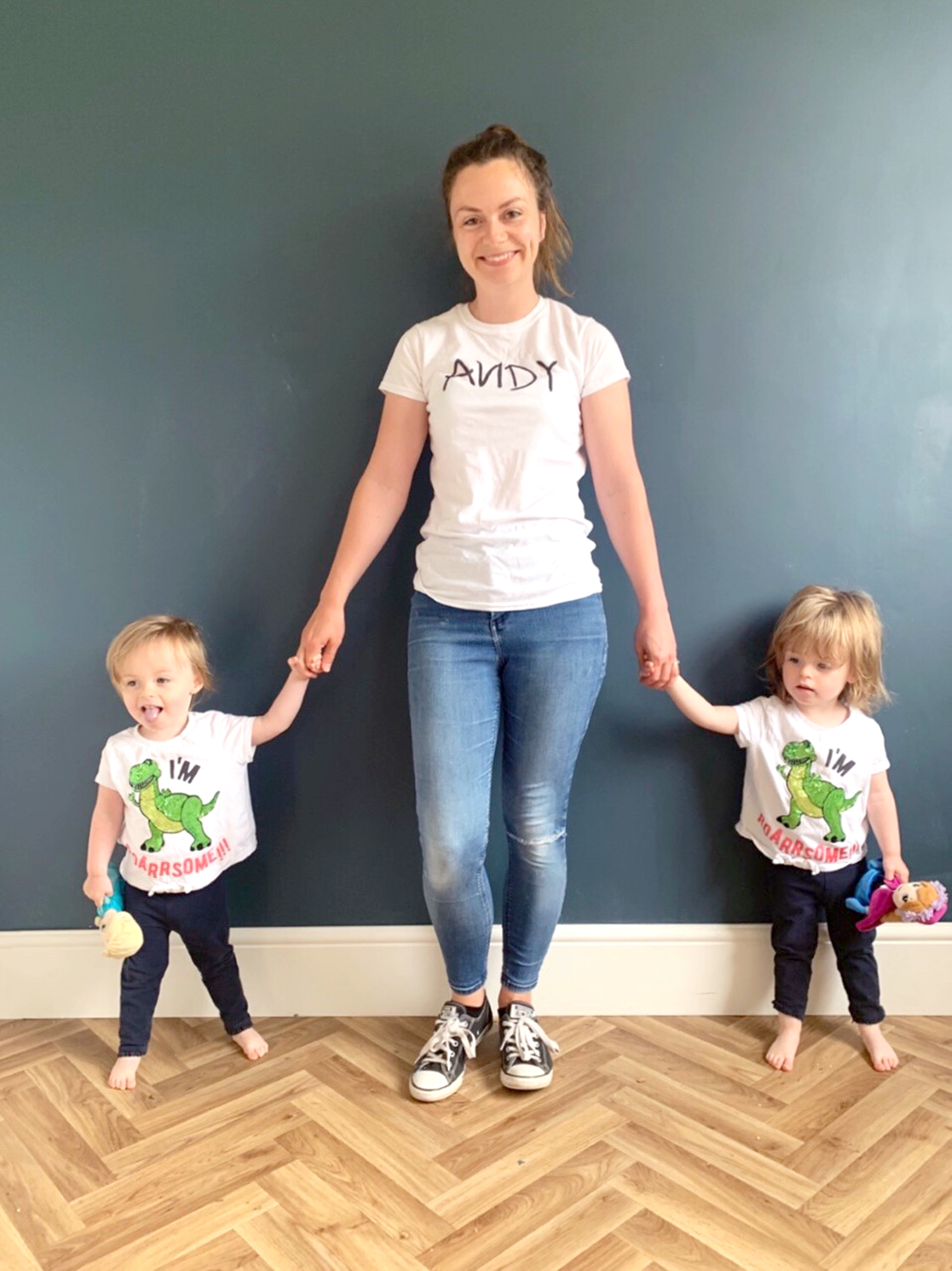 “We were quoted £4,000 for a completely new kitchen and we could’ve gone for it, but we chose to take our twin girls on holiday to Disney instead.

“We weighed up the options and thought our money would be better spent on creating memories with our daughters, so we opted for something more temporary for the kitchen.

“Last month, I started working on the kitchen on a whim because I’d had enough of the brown cupboards.

“I gave it a go despite everyone putting off doing anything to the kitchen at all because they said it would look a mess and would be hard to do.” 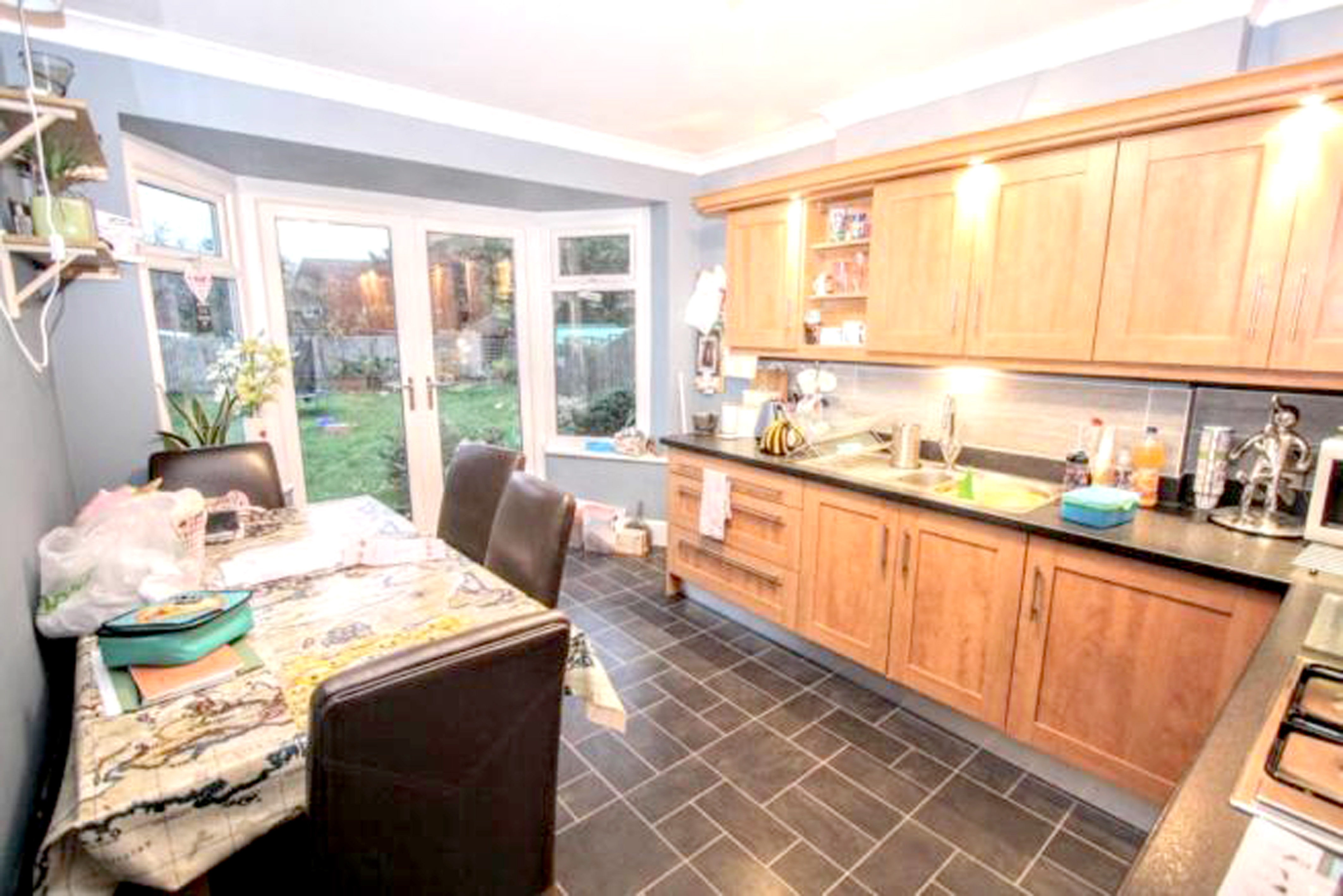 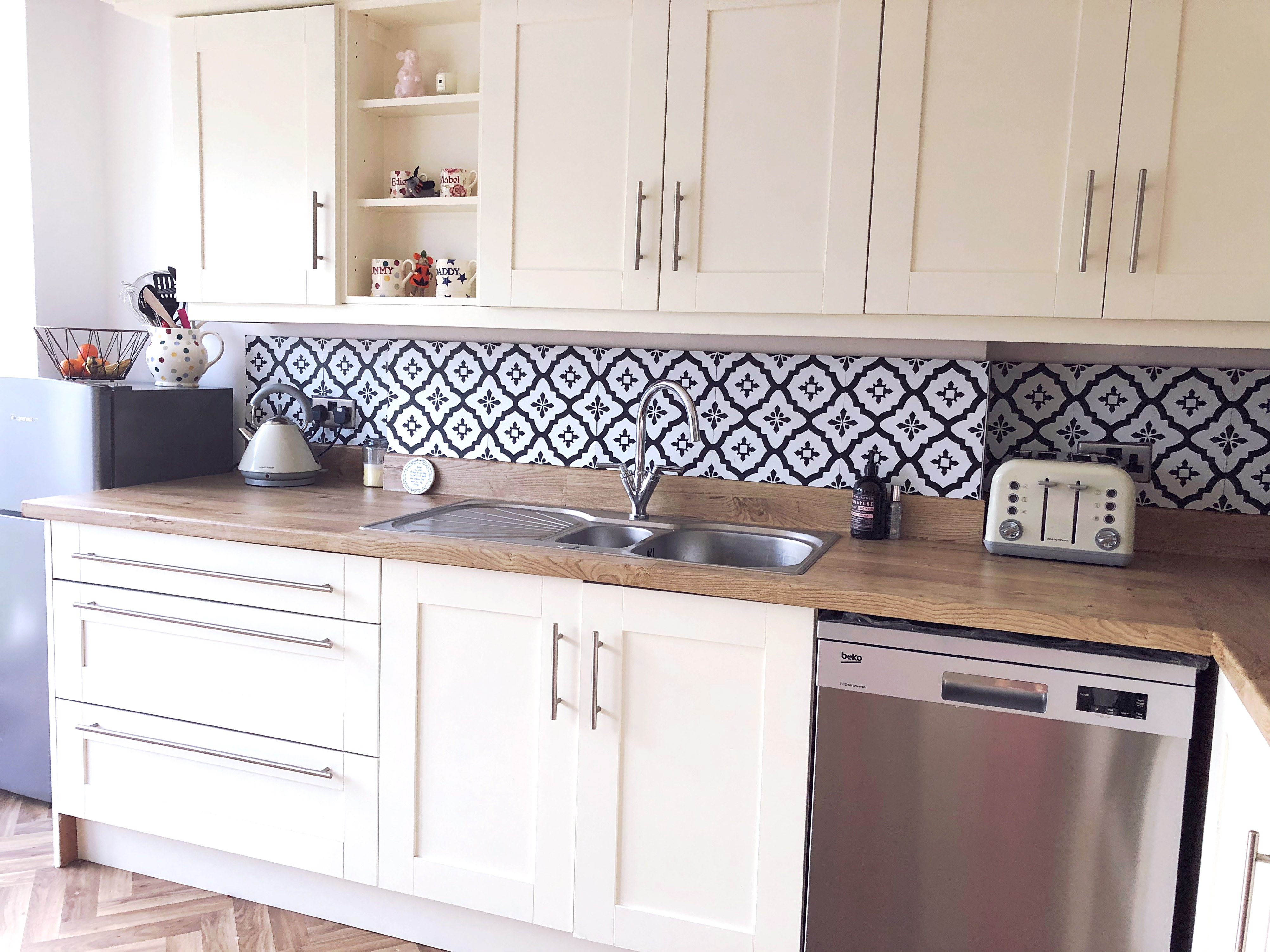 After first taking on the project, Katy began to search for inspiration on Pinterest to match her quirky farmhouse-style vision for the kitchen.

She spotted tins of paint on sale for £12 in B&M Bargains and painted over the brown wooden cabinets and cupboards in the kitchen, which took two and a half days overall and cost £60 all together for five tins.

The DIY-mad mum then wrapped the kitchen counters, which were previously black and textured, with wood-effect sticky back plastic – and two rolls of it cost just £10 each. 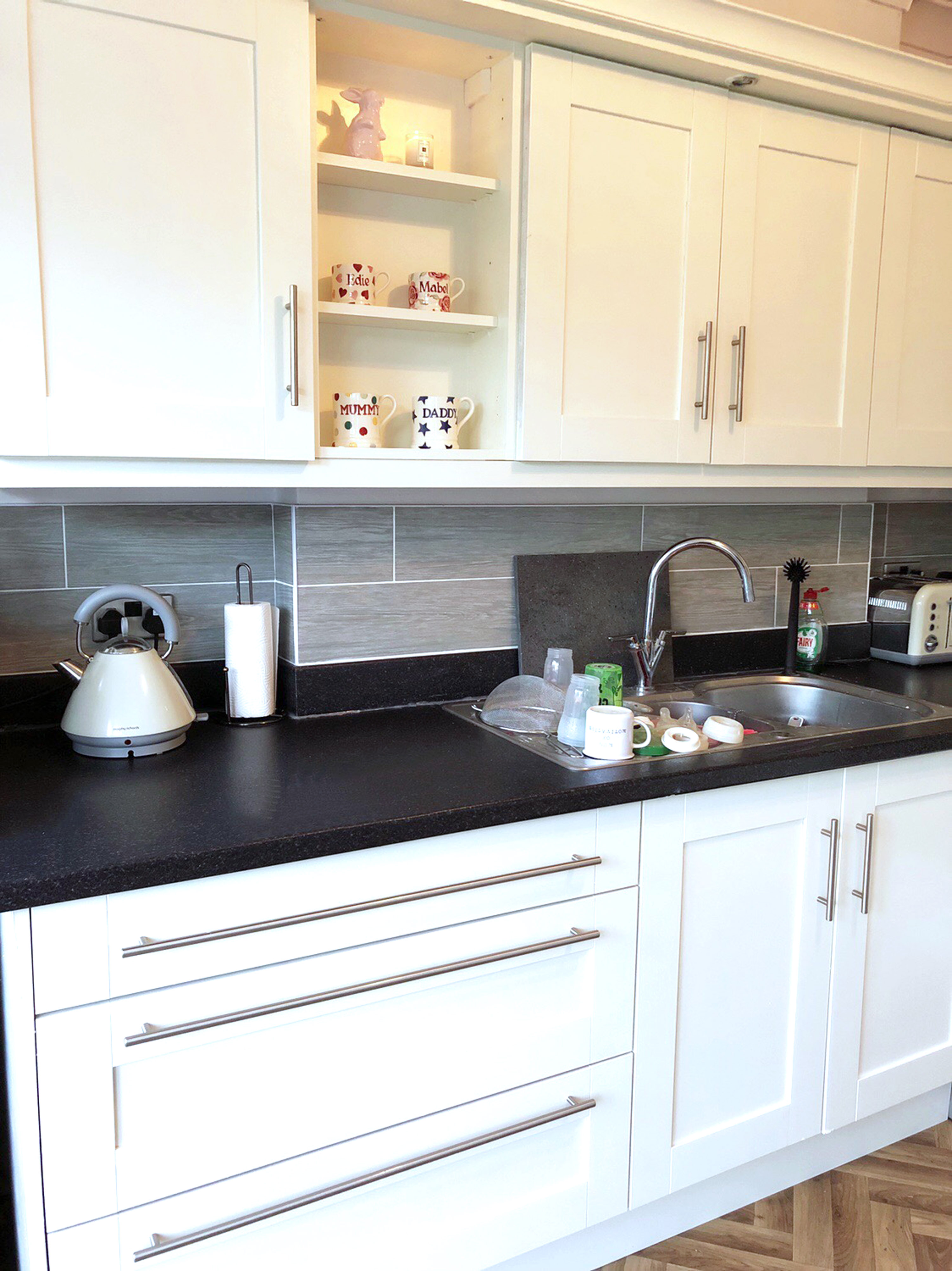 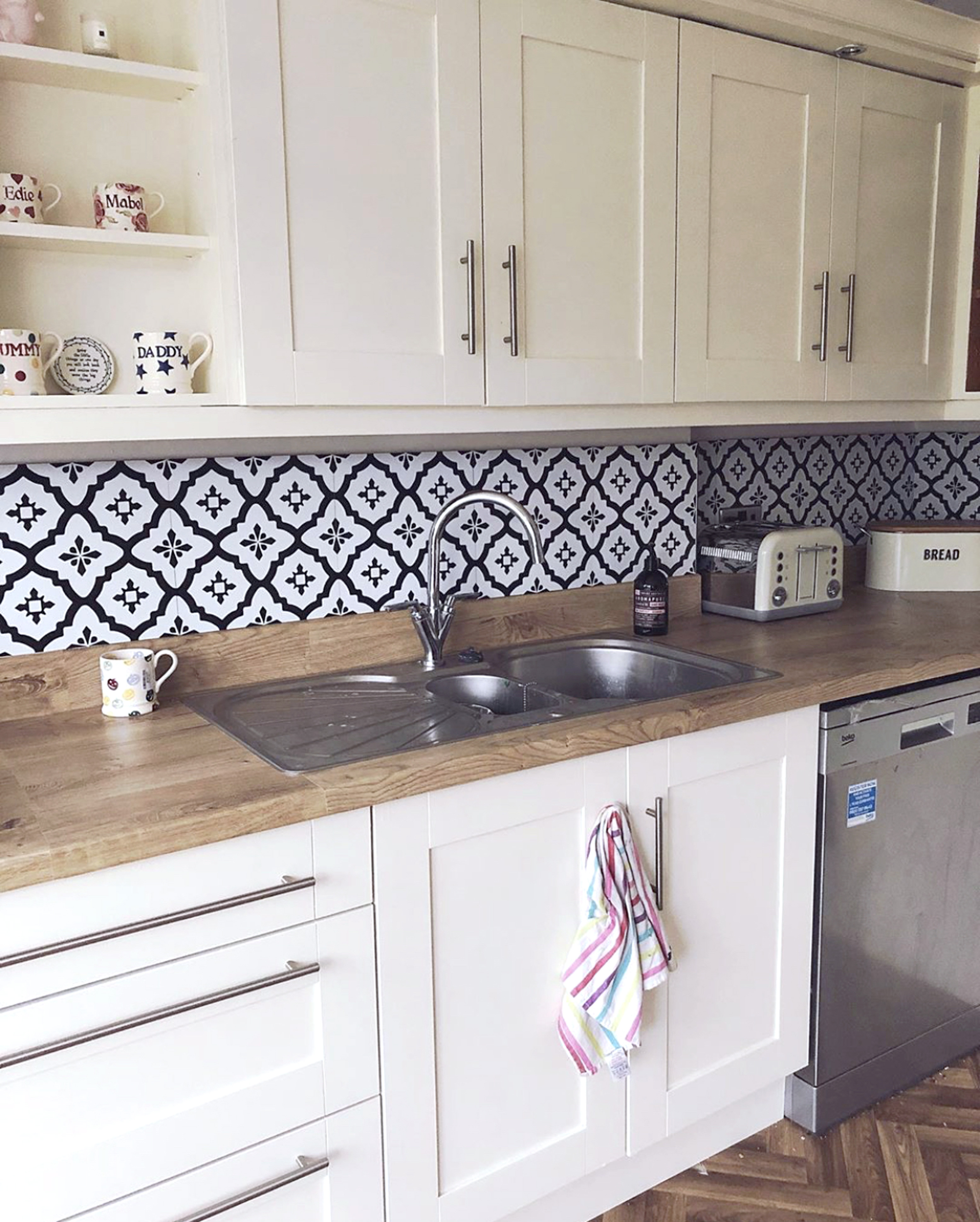 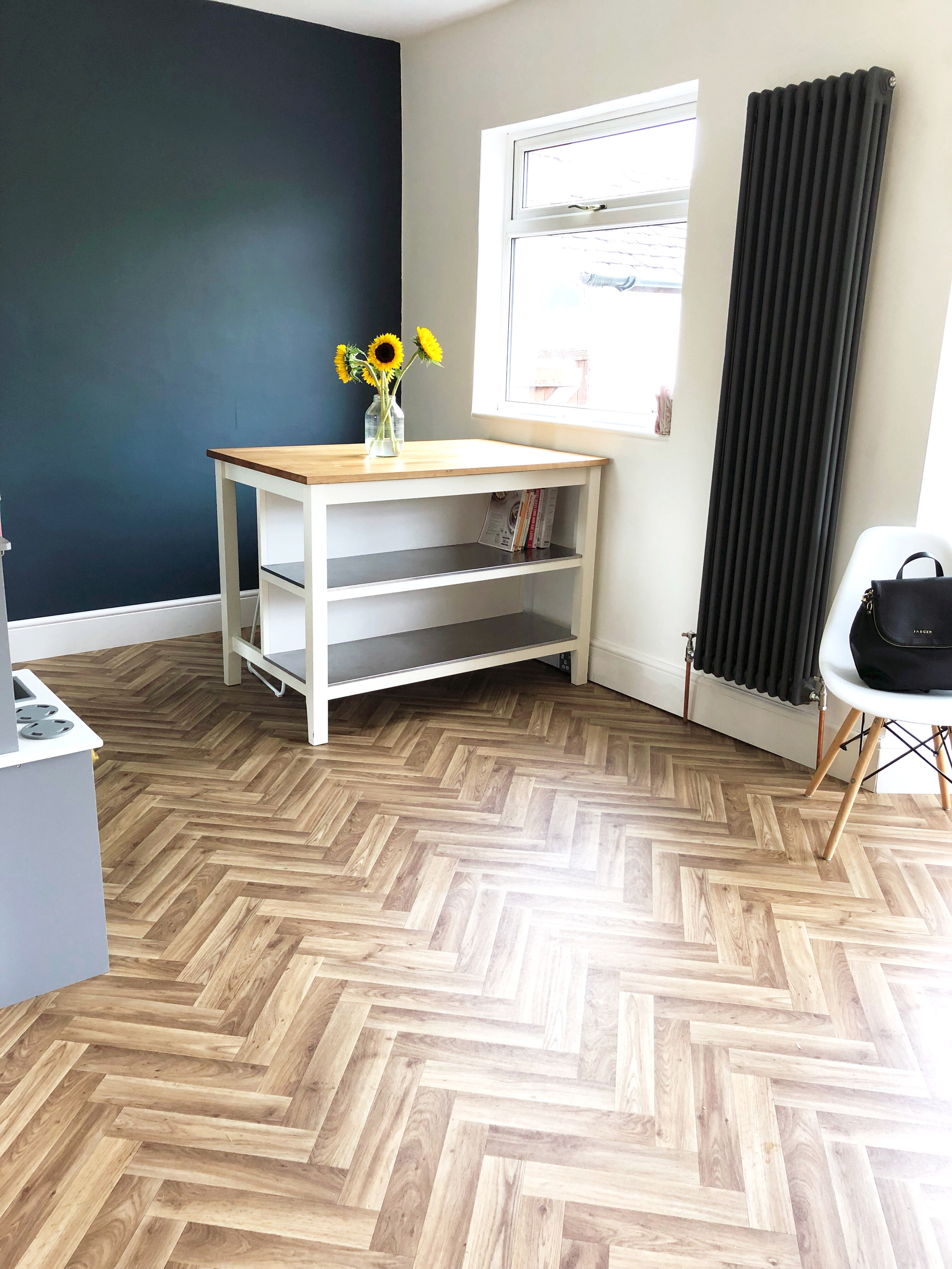 However, for some time Katy didn’t like how her new edits to the kitchen looked, and felt that the cream paint didn’t match grey tiles behind the surfaces.

So she came across more sticky back plastic, which was initially supposed to be used for her new bathroom floor tiles, costing £30 for two packs, and used this instead.

Katy managed to juggle decorating with looking after her twin girls Mabel and Edie, two, and divided her time wisely to spend under one week transforming her kitchen for just £110 in total. 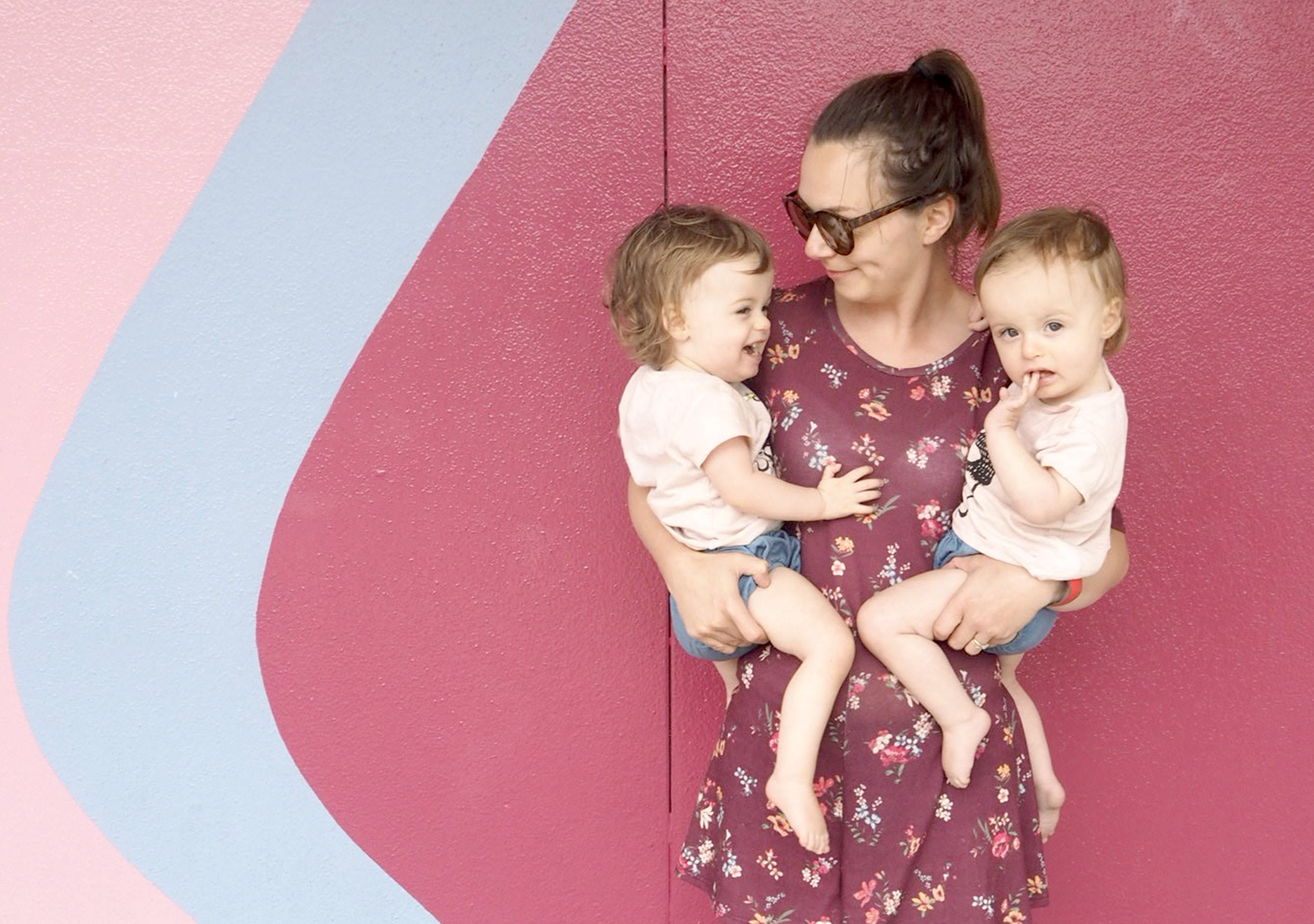 She later splashed out on parquet effect ‘wooden’ flooring which was also made from lino and cost less than £200 to buy.

Katy added: “I’m very pleased with how it all came so cheaply and I’m surprised at the durability so far after having it up for three weeks – I couldn’t envision cooking Christmas dinner in the old one!

“My husband’s friend even came into our home and said ‘I didn’t realise you’d bought a new kitchen.”

We shared how another savvy mum created an incredible playhouse under the stairs for her daughter using bargain items from B&Q for under £100.

We also revealed how a mum-of-three reveals how she feeds her family for only 97p a head.

In more parenting news, mums should NOT pack school lunches for their kids when they turn EIGHT – as experts claim they should be doing it themselves.