On Tuesday the designer and filmmaker Tom Ford was the second-highest trending topic on Twitter for a reason that had nothing to do with the actual news he was making.

He was trending because of a quote that had been attributed to him stating Melania Trump was a “glorified escort” and that he was refusing to dress her. His office, however, was quick to point out that he had never said any such thing. Rather, in a 2016 interview on “The View,” he said that (at one pre-campaign time) he had been approached to dress Mrs. Trump, but he declined because she wasn’t “really his image” and besides, he believed the first lady should wear American and wear affordable — and his clothes were neither of those things.

This matters not so much because it is yet another example of the nefarious ways false information spreads over the internet (though it is that) but because on Tuesday Mr. Ford also became chairman of the Council of Fashion Designers of America, the industry lobbying group, watchdog and, occasionally, scapegoat.

That makes him the effective face of the industry. And that means that what he says, or what he is said to have said, and what he stands for, will become even more fraught, because he no longer simply speaks for himself, but for American fashion. He succeeds Diane von Furstenberg, who held the post for 13 years, making her the second longest-serving leader in the group’s history (her predecessor, Stan Herman, lasted 16 years).

“People keep saying to me, ‘Why did you agree to do this?’” Mr. Ford said on a call from Los Angeles, where he is based. “The answer is: Out of a sense of duty, I guess. At a certain point in your life you’ve learned enough and done enough, you should share what you know. I think that sense of giving back is very American. It’s certainly much less a European thing. I think I can do a good job and I think I have a vision for it, so why not add it to my list of things to do?”

It’s an interesting time to add the CFDA to a to-do list that includes women’s wear, men’s wear, beauty, accessories and filmmaking. The lack of racial diversity at many fashion brands is still very much an issue; Calvin Klein, once a tent pole of American style, just announced it was closing its designer-led Collection line; there’s a general sense of an identity crisis at New York Fashion Week as young designers jump ship for other cities or decide to sit seasons out; and everyone is worried about the future of department stores, once the style conduits to the country. Not to mention the fact that fashion still has a somewhat fractious relationship with the current presidential administration.

“I was courted for awhile,” Mr. Ford said. The hard sell reflects both the seriousness of the job and the complications of taking it on at this time. They put a heavier onus on what could be a ceremonial position, and mean it will be incumbent on Mr. Ford to articulate some sort of way forward for the industry and the CFDA’s 495 members.

As to what, exactly, that way forward might be, however, he declined to go into detail until his term officially starts in June, after the organization’s annual fashion awards (nominations were just released, and the fact that Sander Lak of Sies Marjan is in the running for women’s wear designer of the year, when last year he won emerging designer, reflects the general confusion). What Mr. Ford would say was that he felt his international background — his years as creative director of Gucci and, later, Yves Saint Laurent from 1990 to 2004, his time based in London with his own brand from 2010 to 2016 — would inform his message. 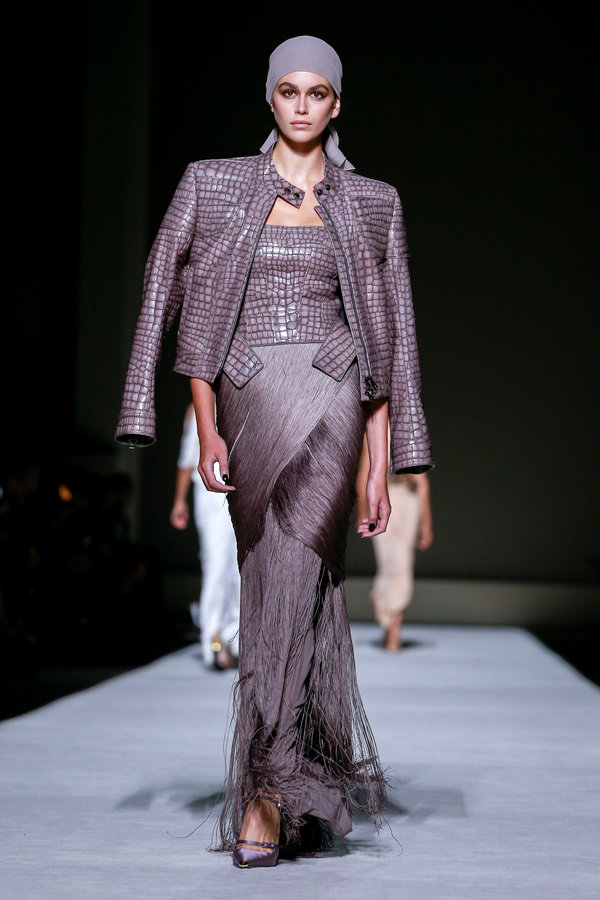 “I think the key to the future of American fashion is to become more international and more global,” Mr. Ford said. “Having recently returned to America, one of the things that struck me the most in every industry and in American life was how isolated America was and how inward looking. I’ve always thought of myself as an international designer, designing to a global market, and I think that American fashion needs to think that way. Even if you’re just starting a business you have to be immediately thinking about what’s going to help you be marketable to the world, and not just to America.”

And even more than that — not just to New York. Although the CFDA is based in Manhattan, Mr. Ford, who has been a member since 2000 and has won seven CFDA awards, including the lifetime achievement prize in 2014, has no plans to move, or to be in the city more than the “four or five times” a year he currently visits. He also has no plans to make himself an example of a designer who recommits to New York Fashion Week on a long-term basis.

“Arguably New York is the center of a certain America, and I realize part of the CFDA is organizing and — I don’t want to say policing — New York Fashion Week. But it is also encouraging American designers to be successful and part of that is embracing the fact we live in a big world,” he said.

It’s an interesting statement, and one that verges on the political in a time when the fight over a border wall has been one of the defining discussions of the year. Under Ms. von Furstenberg, the CFDA lobbied for greater intellectual property protections for designers, embarked on a model health initiative, raised the volume on the conversation about diversity and inclusion, and brought new American designers to Paris for a fashion week showcase. Now it is up to Mr. Ford to choose his issues and decide how to direct his new cast.