Celine’s new Madison Avenue flagship is where Hedi Slimane’s debut collection for the house is now for sale. In October, critics incinerated these clothes, so brokenhearted were fans of Phoebe Philo’s vision for Celine when they saw the 96 looks that seemed to say only: “Yeah, I party.”

Then, on March 1, Mr. Slimane showed his second collection: a litany of archive-sourced culottes, horse-laden hardware and trim jeans. It was old-old Celine, a collection from the source. The response was positive. Was this shift proof of the power of discourse, or merely a company hitting a target somewhere between Chloé and Hermès?

But in store, before the second collection was shown, all I had was the first impression, the first non-Philo collection hanging from large rails above the lava stone floor. Grouped together on the center rail were basics: a peacoat, blazers and shirting, hung apart from the mini metallic dresses they were styled with on the runway.

You can see them from the sidewalk, along with the wood seats and even the register. In fact, the photographs accompanying this column were taken through the store’s large windows because Celine declined requests to shoot in the store. I call this high-visibility, low-transparency move “shoptics.” 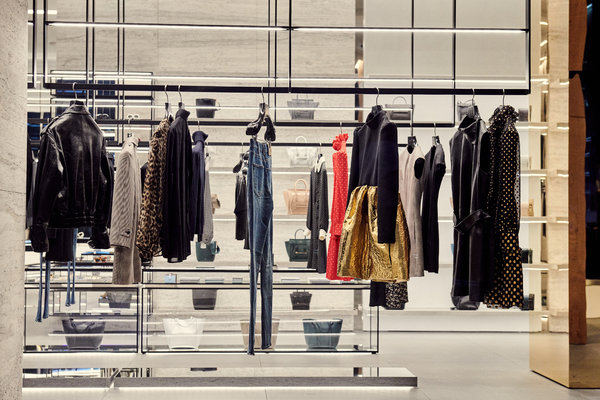 My friend, a Philo-phile and “old Celine” regular, was drawn to a calf-length black cashmere coat ($4,850) with a leather belt. The salesman opened a mirrored door in the dressing area so she could observe the back. His invitation? “Let’s have a party.”

I was told that all of the clothes are unisex (I was only the second person to try on a $26,400 metal shirtdress made of fine knitted chain; a male salesperson braved it first), but also that the men’s wear is selling well. “Men have been repeat customers already,” a salesman told me.

They sure have. To dedicated Slimane customers, this “new” Celine hardly needs introduction. They’ve bought it all before: pants so tight it takes a jump to unwedge an Adderall from the pocket; a densely sequined blazer that reflects specks of phone light in a dark club; and a leather jacket to throw on whenever it’s time to suck nicotine between now and dawn.

Perhaps Mr. Slimane’s magic is that he soothes his spend-ready audience: Wherever he goes, he promises things won’t change too much. Rock ’n’ roll. Forever.

In the dressing area, the “party” was on. The salesman pointed to the beautiful seams that bound the back of my friend’s coat, details that, I appreciated, wouldn’t be visible at night. “The lines that make the drape echo the lines of the Brutalist modernity of the store,” he said.

The coat’s construction was a celebration, but instead my friend left the store with one of the last bags in stock designed by Ms. Philo, a blue-green leather tote. “The reason that I would choose to go to Celine is because of her depth,” she told me. “It’s not the lines or craftsmanship. It’s feeling understood.”

As I clicked through photos of Mr. Slimane’s first Celine collection, I felt like raw pork in a bag of dry bread crumbs: contextless, shaken and coated in stale. Celine was wiped clean! Ms. Philo’s ode to aspirational womanhood was gagged with a puff sleeve and tossed into a leather canyon!

Now, I feel nothing. The shock of new Celine was a reminder that brands are not culture. They’re companies. The design spoke to you; the house charged you. The culture has no set boundary, while brands are defined by their territories.

With this realization, the party really started. Perhaps it was all the beautiful marble. I made party conversation, asking about a red rock in the back of the store that was part of an art installation. I was told to make sure I didn’t miss the “semi-distressed cube” that is also art in the store, so I went and looked at that cube.

It was there that I ran into someone I knew but did not expect to see, just like at a real party: a salesman from Balenciaga uptown who knows I am an author of this column. The most “party” moment: When he walked away, I hoped he wasn’t going to talk about me.

I think it’s really smart that the new Celine store sells single earrings. LVMH, the luxury group that owns the label, will make a lot of money. The earring I liked was $1,800. I don’t have that money. I never even shopped at “old Celine.” The bag I eBay-ed when Ms. Philo took over in 2010 was by Michael Kors, who designed the label from 1997 to 2003, but people assumed it was Ms. Philo’s design. I have no idea what, if anything, this means.

When I asked to look at the earring, the salesman put on black gloves and passed it over the lighted glass case. The bags were handled with black gloves, too. As shoppers, we were allowed to touch these things with our hands.

We also touched a black-and-white-checkered pony-hair coat ($17,900), which a salesperson described as “substantial.” It fit my girlfriend, who guessed the price exactly. When I asked how, she said she imagined what she would theoretically pay for it and doubled it. Then doubled that.

I tried on a leather jacket with a “V” of rhinestones down the front, a set of migrating birds sparkling in the sky ($7,600). In the mirror, I felt that if I were a party animal, this is what I’d be.

A week later, I woke up to the silence of exciting news on the internet. I opened my phone and saw Hedi Slimane’s new old-old collection for Celine, right in the middle of Celine’s brand territory. See it in stores this summer.