At first sight Shalom Harlow is everything a supermodel used to be; achingly thin, procelain white, impossibly angular and captivating from every angle. On the red carpet for the National Gallery of Victoria’s Summer Gala in Melbourne, the 49-year-old Canadian is in a different league to the gathered influencers and celebrities, and she can see the difference.

“Social media platforms have compromised the quality of some of the women who are considered muses now,” Harlow says. “There’s a power in those social platforms that can be utilised in a fantastic way and skilfully by some. But then it can become self-promotion for power.” 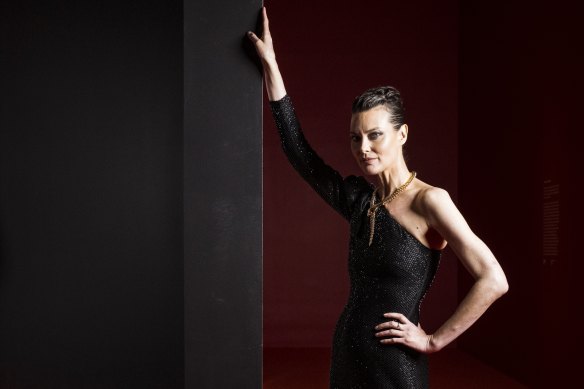 Supermodel Shalom Harlow at the National Gallery of Victoria for the Summer Gala on December 10.Credit:Chris Hopkins

“We used to be culled by the creatives in the industry. The models of my time were chosen because there was something the artists felt compelled to interface with. Now it’s how many followers you have.”

Harlow was a member of the second wave of supers in the nineties, following Christy Turlington, Linda Evangelista and Naomi Campbell down the runway, after being discovered in the crowd of a Cure concert in Toronto when she was 15 years old.

While Harlow welcomes greater diversity in the fashion industry, it’s the shift from celebrating talent to championing commerce that challenges values nurtured in a self-described hippie upbringing.

“I mourn some things about the way the industry was. It was a boutique industry. When I started Mr Givenchy was still at Givenchy. The masters still owned their houses. There was a different sense of what the creation was for. Now there is more of a consumer thrust to everything.” 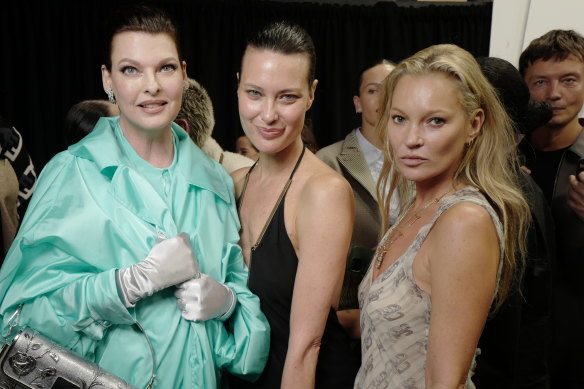 Linda Evangelista, Shalom Harlow, and Kate Moss at the Front Row of the Fendi Spring 2023 fashion show at the Hammerstein Ballroom on September 9, 2022.Credit:Getty

Harlow sees designer Alexander McQueen, the subject of the NGV’s summer blockbuster, as a victim of the same pressures. McQueen died from suicide in 2010, aged 40. Having appeared in McQueen’s memorable spring 1999 show where she was sprayed by paint with robot arms, Harlow was the gala opening’s special guest.

“I think he was really victimised by what became the corporate takeover of fashion,” Harlow says. “It was a pivotal point where fashion went from a boutique industry into multinational companies, so the output required for those designers was immense. They were put through the grind mill.”

“We were gifted with a master. He was a Mozart of fashion design.”

“For years I was going back and forth on The Concorde. It would be ‘Mr Penn needs you’, Nick Knight, Steven Meisel and ‘Grace Coddington wants you here’,” she says, rattling off photographic and styling legends. “I didn’t have access to a ‘no.’”

The travel took its toll, with Harlow working intermittently from 2000 before retiring because of health issues.

“I contracted late-stage Lyme disease and there were complications… my body was in such depletion.”

In 2018 designer Donatella Versace coaxed a healthier Harlow back onto the runway, leading to immediate bookings for future work and more covers, but this time with better access to a ‘no’.

“I’ve learned to have boundaries and a healthier sense of my own self-care,” she says. “I think there are some people that approach this position of being a model from a more narcissistic point of view. That was never the case with me.”

With the way that Harlow’s eyes flare within metres of a camera and her eloquent descriptions of McQueen’s mastery it’s difficult imagining her declining future offers from Meisel, Knight or Coddington, even without a Concorde waiting.

On Harlow’s own Instagram account I came across a video of the model throwing herself against a studio wall with force, aiming for the perfect photograph.

“That’s what keeps me here,” she says. “That’s the juice that can get me on a transatlantic flight. Could you see the commitment? That’s a repetitive situation too. It’s not once or twice.”

For Harlow it doesn’t stop.