Wendy Williams wore a head turning sweatshirt made up of colorful sewn-own stuffed animals, in one of her most daring fashion choices yet.

Daytime talk show host Wendy Williams always looks so incredibly sleek and stylish on her eponymous show. So she decided to have some serious fun with fashion as she arrived at her studio in New York on Tues. Apr. 27. The 56-year-old donned a navy blue sweatshirt that had a series of colorful stuffed animals hanging from around her neck neckline. They included a long yellow lizard, a cute pink seal, a black and yellow stuffed bumblebee and even a pink, long-eared bunny rabbit stuffed animal.

The unusual sweatshirt was bound to get paparazzi attention, as Wendy paired it with black leggings and elaborate high topped black sneakers. But what came next was completely unexpected, as Wendy later took off her leggings to reveal her long, nearly bare legs. She appeared to have on the tiny nude fishnet support nylons that she wears while taping her daytime talk show, so at least that was one pre-show task already completed. 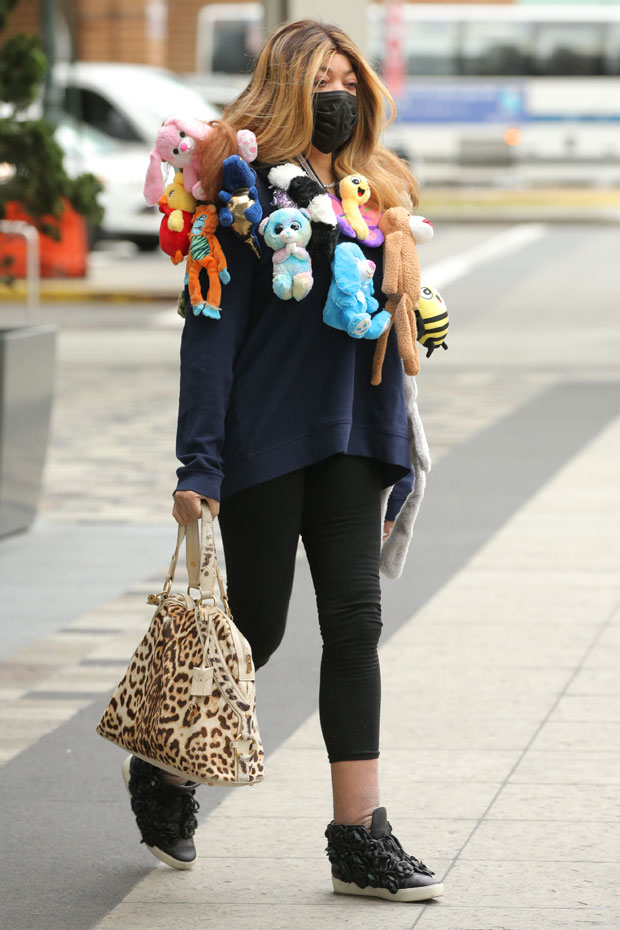 Wendy had on a gorgeous long caramel colored wig with soft waves. She carried a large leopard print large bag and appeared ready to hit the makeup chair, as her eyes looked au natural above the black face mask she sported.

Wendy looked incredible once she hit the air minus the funky stuffed animal sweatshirt. She rocked a gorgeous, long sleeved, colorful floral dress for her Apr. 27 The Wendy Williams Show. Her tresses appeared nearly the same as when she arrived at the studio, except for they were  freshened up a bit for air. You can see how sleek and stylish Wendy looked on her show above, minus her fun stuffed animal sweater.

Wendy has been totally pulling off some eye catching fashion looks outside work lately. On Apr. 20, she showed of her long, lean legs in a pair of Daisy Duke denim shorts while leaving the studio. She topped them off with an oversized NY Yankees bomber jacket and carried a leopard Saint Laurent purse, which was a different handbag that the leopard print one she brought to work today.

Maybe having romance in her life is making Wendy push her fashion boundaries. The talk show host started the Date Wendy! segment in Jan. 2021 and has been seeing Maryland businessman Mike Esterman, 55, who was announced as the contest’s winner on the Feb. 26 episode of The Wendy Williams Show. Wendy revealed that she liked Mike because they’re “age appropriate” and because “he’s got jokes.” But the long distance relationship has proved a little challenging. “I really like him, and he really likes me. Like it broke my heart when he was leaving. Like I walked him to the elevator and waited for the doors to close,” she confessed on her show earlier in April when Mike had to leave NYC to return home to Maryland.