In Nigeria’s largest city, boundary-breaking style pushes up against tradition and social conservatism. 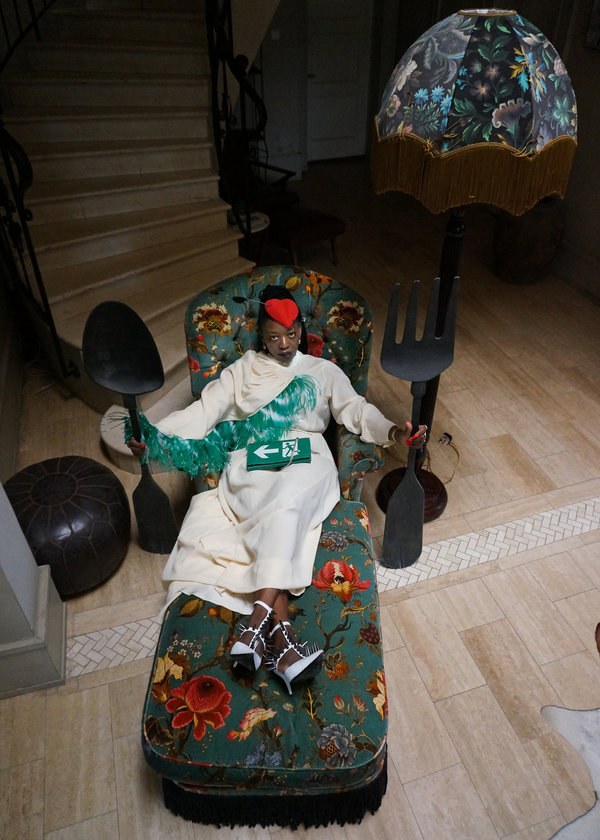 LAGOS, Nigeria — Charly Boy decided he would wear rouge. It was the 1970s, the height of the sexual revolution in the West, so it wasn’t unusual for men to be seen in makeup.

But for a young student in the United States coming from a small town in Nigeria, dressing in ways that drew attention to himself — painting his cheeks and lips in bright colors, lining his eyebrows in kohl, wearing studded leather, acrylic talons and plastic fangs — felt like an act of defiance.

“Sometimes I would release pictures of me sleeping in a coffin and tell people I like to suck blood,” said Charly Boy, a former musician and television personality, now 67. He returned to Nigeria in the ’80s, at which point his appearance became a deliberately provocative performance.

The country was going through a series of military juntas in which cultural and artistic expression were suppressed and heavily policed, and Charly Boy wanted to make himself seen and heard. Consequently, his music and videos were often censored.

Since then, the government has returned to a democracy, but most of Nigeria remains politically, socially and religiously conservative. Men and women tend to dress accordingly, in loosefitting garments made from vivid traditional textiles (brocade, adire, ankara) and Western-style business professional attire. They wear their hair in gender-conventional fashions: long for women, short for men. Much of their clothing is stylish, but it is also meant to attract little attention.

These sartorial norms are upheld by institutions and social groups. In some congregations deacons scold female churchgoers for keeping their hair short and suggest that they try weaves instead. Most universities, often considered places for self-discovery, value obedience above personal expression. Stylistic accouterments — tattoos, makeup anklets, too many waist beads or rings stacked atop one another — are seen as excessive and inappropriate.

Still, some Nigerians continue to style themselves in the name of free expression. As Charly Boy said, “When you do something long enough, even if you will have unbelievers in the beginning, they turn to converts.”

Ezra Olubi had to contend with bans on jewelry, pants for women and jeans for everyone on campus when he was a university student. So it wasn’t until after graduation that he found freedom in M.A.C. lipsticks and Deborah Lippmann nail polish.

“I got a lot of stares, but I also knew I looked good,” said Mr. Olubi, 33, showing off his brilliant purple polish.

Today Mr. Olubi attends investor meetings in San Francisco and Lagos with tousled dreadlocks, long nails painted in bright colors and lipstick. He is the co-founder and chief technical officer of a finance tech start-up, Paystack, that has raised $13 million in investor funding and was accepted into the Silicon Valley incubator Y Combinator.

Sometimes passers-by ask about his style, expressing concern and confusion.

“When they ask, I tell them why,” Mr. Olubi said. “Because I like it.” Sometimes, as a follow-up question, people ask if he is famous — say, an athlete or a musician.

“Everybody thinks the only reason that gives you the right to look like this is because you are an entertainer,” he said. “It shows how much people don’t think others are allowed to be individuals.”

There are more pointed responses, too. On his way home from our conversation, for example, Mr. Olubi was pulled over by policemen. They wanted to know if his company, Paystack, sold cosmetics. They threatened that painting his nails and wearing makeup is illegal. (It is not.)

In the past Mr. Olubi has also had his phone searched by police for pictures, apps and other evidence of his sexuality. The police reasoned that for him to wear makeup and paint his nails, he must be gay, the expression of which has been illegal in Nigeria since 2014. (The law criminalizes marriages and civil unions of same-sex couples, but it is often widely interpreted to mean appearing as a gay person in public.) Mr. Olubi tries to be deferential and instructive when these confrontations take place, as they do routinely in Nigeria.

“You don’t owe anybody apologies for your appearance, but when people ask I tend to give them answers,” he said. “It is a teachable moment.”

Denola Grey, 28, is also no stranger to the response that follows certain modes of dress in his home country.

In 2015, after shooting six episodes daily for a television show in which he was a co-host and styling himself from his wardrobe, he decided to try something new. Inspired by a Brioni men’s wear collection, he belted his suit high up, around his torso. Satisfied with results, he posted an image of the look to his social media pages. Comments of outrage poured in.

“That belt you used to tie your waist, we will tie it around your neck,” one commenter said.

Mr. Grey (whose given name is Denola Adepetun) had apparently overstepped, dressing in a way that was supposedly feminine. A few months later, at Lagos Fashion Week, the country’s pre-eminent fashion event, a number of male guests showed up in a similar style.

“I embrace my masculine and feminine sides,” Mr. Grey said over Smarties and a chicken pie at a cafe. “I take the structure of feminine curves to celebrate the male form in what I wear.”

Of course, there’s a big difference between personal expression and what sells.

In 2015, Yegwa Ukpo set up Stranger Lagos, a concept store that stocked monastic, often gender nonconformist clothes inspired by the Japanese fashion designer Yohji Yamamoto. Usually dark and loosefitting, the outfits deliberately lack the drama or extravagance with which some Nigerians present themselves; they are clothes that most would never wear.

“The standard I was trying to counter was the idea of ‘clothing as ornament’ and ‘clothing as sign of wealth,’” Mr. Ukpo said. “The alternative would be clothing as something with worth inherently due to conceptual underpinnings, design — fabric, pattern cutting and construction — exclusive of this idea of whether or not it beautified the wearer.”

In 2018, just three years after it opened, the store shut down.

“I never expected this approach to become mainstream,” Mr. Ukpo said. “I do think we had a definite impact when it comes to what people believed was possible in this space.”

Adebayo Oke-Lawal, 28, the creative director of Orange Culture, stocked his wares at Stranger Lagos while the store was in business.

For his first collection in 2011, Mr. Oke-Lawal sent models down the runway wearing what he called “skouzers”: half-skirts draped over trousers at the waist. It was, he said, an attempt to play on the thin line between what is regarded as masculine or feminine. Most people attending the show, a private presentation, were confused. They advised him to stick to fashion styling, which he was also doing at the time.

In subsequent collections, Mr. Oke-Lawal had more to inspire discomfort. There were collarless tunics with side zips that opened to the upper chest, a suit with a large hole intentionally cut into its upper back, overlapping layers of sheer satin. In 2014, his efforts were recognized: He was a finalist for the Louis Vuitton Moet Hennessy Prize, a prestigious award for young designers.

These days, his clients include Naomi Campbell, Lupita Nyong’o and Chimamanda Adichie. His clothes are in stores in global fashion capitals and across the country, a leap from Stranger Lagos, which was the first and only store to give him a platform early on. He has shown in fashion weeks and presentations in Florence, Italy; Paris; London; Accra, Ghana; New York; and Johannesburg.

Mr. Oke-Lawal’s journey started at home. Portraits of his very stylish parents, now in their 50s, inspired his looks. His father wore printed shirts and short shorts at a time when Nigeria was less conservative.

“Growing up, I was really shy about my ideas and wanting to dress people up in a certain way,” Mr. Oke-Lawal said. “I would just draw.”

“But at 10,” he said, “I decided to wear what I wanted. Clashing colors. Camouflage. I figured people are going to think I’m weird anyway, would still bully me anyway, so I might as well get bullied for being exactly who I wanted to be.”

Teni the Entertainer, a musician, has learned recently what it’s like to be bullied for how she is seen. A few weeks ago, the hosts of “Loose Talk,” a popular Nigerian podcast, opined that she wouldn’t go very far in her career looking the way she does.

The hosts were referring to her style, which resists the sensuality that is often expected of popular female performers. Teni, 26, whose given name is Teni Apata, wears do-rags, sporty sunglasses, graphic shirts with humorous sayings on them, baggy pants in bright colors, sneakers — all of which she sometimes buys from thrift and dollar stores when traveling.

She had heard the critique before. Before she was signed to her current label, music industry executives advised her to be more girlie, to wear weaves.

“First of all, weaves make me sweat,” she said in her home office. “It is hot here. I will have rashes on my neck.”

The podcasters were also referring to her weight, which, for many, upsets the stereotypical image of a presumably slender singer who sells sex appeal.

“I like food. I don’t want to be thin. I like the way clothes fit. I like the way I stand. I can challenge agberos,” she said, referring to a troublesome and often violent street gang in Lagos.

As a university student, she didn’t like to be stressed by choosing what to wear to class, especially the morning ones. So she would roll out of bed half-asleep, trying to catch her 8 a.m. in a T-shirt, pajamas and flip-flops.

In Nigeria, she’d probably be thought homeless. But in America, she got invited to fashion shows, became popular with the football players and other cool kids. The relaxed, devil-may-care look stuck. She has been compared by her mother to Charly Boy.

But what really shapes her self-presentation and her overall outlook on life is death.

“I always watch my father’s funeral video because it gives me inspiration,” she said. “How do you see a man that’s so vibrant and brave just lying there?”

When he was alive, she said, “my father did what he wanted to do. Years after he died, people still come up to me and tell me what he did.”

“I want the same, when I die, I want people to say I did what I wanted to, not because they wanted me to.”