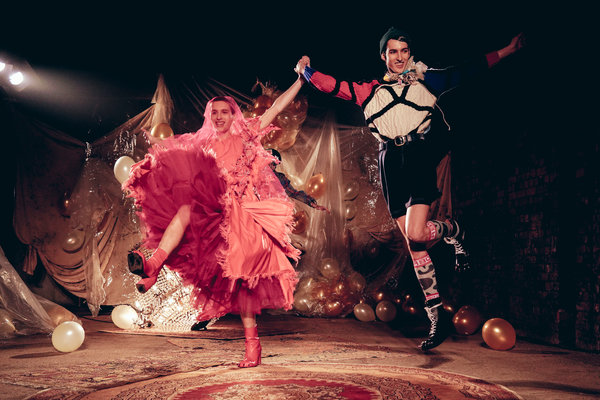 LONDON — The arrival of the new year has done little to quell the nerves about a London in flux. The economic and political future of Britain remains uncertain, and the battle over how the country should leave the European Union continues to rage.

It has prompted an identity crisis that spilled over into the first of the coming round of fashion shows, which began on Friday with London Fashion Week Men’s. After all, the old narrative of London as a global metropolis was an identity deeply woven into its designs.

So it was of little surprise that, last weekend, passionate questions around authentic presentations of self and voice, as well as explorations of artifice and mirage, were front and center on the runway. Here’s what shone through.

This season, the stakes were raised by some of the brightest young talents on the fashion week calendar: recognition, perhaps, of a need to boost their credibility outside of their home base.

Case in point: Charles Jeffrey Loverboy. The latest collection, entitled “Darling Little Sillies” and showcased in a dilapidated Victorian power station on the banks of the River Thames, was inspired by a first edition of “The Story of Peter Pan,” with a heady dose of 1920s cabaret culture thrown in.

Mr. Jeffrey’s prodigious talent was visible in both cut and construction, as was an effort to make his often outrageous styles more accessible.

The same could not be said of Art School, the gender non-binary collective that this season graduated from the bosom of Fashion East, a talent incubator. The designers Eden Loweth and Tom Barratt said they had been picturing models on the way to the opera, but it was still hard to imagine the exuberant explosion of silk slips, wobbly stilettos, hacked-up sweatshirts and bottom-skimming metallic tuxedos as actual clothes.

And then there was Samuel Ross of A-Cold-Wall, the most recent recipient of the Fashion Award’s prize for British Emerging Men’s Wear Designer and one of the most-watched names on the London scene.

Like Mr. Jeffrey, Mr. Ross has stepped things up a notch while looking to the news cycle. His show was inspired, in part, by the immigration crisis and the movement of people across bodies of water in Europe.

Models came down a runway adrift in inky black water, surrounded by growling dogs and dancers who slinked and sighed in the shadows. Constantly looking over their shoulders, they wore versions of the sportswear that has become this brand’s signature — hoodies, macs, protective utility vests and tailored tracksuits in muted tones — with reflective piping and compasses sewn into garments.

“Fashion has overdone nostalgia in an attempt to cash in on your impossible longing for a perfect you and perfect time, that doesn’t exist now and actually never did.” So read the show notes of Liam Hodges, a London men’s wear favorite, whose kaleidoscopic collection of tracksuits and T-shirts was inspired by the growing pains of “modern day cyborgs,” touching on ideas around evolving online and offline identities.

It was a theme also plumbed by Cottweiler, designed by Matthew Dainty and Ben Cottrell. Their latest collection, presented 12 levels down in a dank East End car park alongside moss-covered urinals, was a lament about the decline in face-to-face interaction (specifically cruising in parks), thanks to the rise of social media.

Techy tracksuits and multipocket outerwear in verdant hues, laden with cheeky touches like open flies, midriff hints and bottom-skimming zips, were framed by a 10-piece capsule collection of sleek raincoats made with the Italian label Allegri.

Hussein Chalayan, who celebrates his 25th anniversary in the fashion business this year, embraced his own next stage with tailoring — experimental origami-style folds and wide-cut padded jackets with kimono sleeves — as well as tongue-in-cheek, class-infused active wear from the worlds of equestrianism and après-ski. It needn’t all be bad, these clothes seemed to say, at a time when nothing is quite as it appears.

“Pretense healthily lifts us away from our reality,” Mr. Chalayan said, “adding a richness to the monotony of our lives.”

Also adding richness: Craig Green’s return to the schedule after a brief Florentine sojourn at Pitti in Italy in June. His beautiful designs rooted around timeless, nomadic men continue to earn him admiration (he won British Designer of the Year men’s wear at the Fashion Awards in December for the second year in a row).

Belted trench coats in black, blues and earthy reds had an enveloping, cocoon-like quality, while a series of long-sleeved tees and trousers in tightly elasticated plastic scales came with billowing hoods to match. The point being traditions did not need to be forgotten — there were ancient knitwear techniques woven into almost every look — even if the focus remains moving forward.

Also returning: Patrick Grant of E-Tautz, who in recent years swapped the runway for simpler presentations. He had travel on his mind, namely to Brazil, which inspired the exotic pops of color in his elegant collection of single- and double-breasted jackets and slouchy, wide-leg pants. They were suave, well-cut clothes with a sense of gentlemanly confidence, an underrepresented aesthetic on the current calendar lineup.

Christopher Raeburn celebrated his 10th anniversary this season by revisiting and reimagining some of his most popular creations — fitting given his brand’s “remade, reduced, recycled” ethos.

Staples of his utilitarian street wear aesthetic, like typhoon suits, oversize khaki parkas and patchwork tracksuits, were shown in new and innovative materials on an army of models. There were also collaborations: with Range Rover (premium sunglasses) and Margot Vaaderpass, a fellow Royal College of Art designer (roll-neck knitwear made from recycled yarn), to demonstrate the power in numbers.

David Beckham, an owner of Kent and Curwen, the British heritage men’s wear brand, wheeled out his wife, Victoria; his eldest son, Brooklyn; and other key members of the clan for a slap-up breakfast on Sunday morning, the better to debut a capsule collaboration with the BBC television series “Peaky Blinders.”

There were classic three-piece tweed suits, signature collarless shirts, and peg-leg wool trousers — all in autumnal tones — alongside a motley mix of rugby shirts, Crombie coats, argyle sweaters and striped skinny suits. Also flat caps, which, Mr. Beckham admitted, “I got from my granddad. I wore his from a very young age.”

And now? “Brooklyn has taken it on as well.”

Elizabeth Paton is a reporter for the Styles section, covering the fashion and luxury sectors in Europe. Before joining The Times in 2015, she was a reporter at the Financial Times both in London and New York. @LizziePaton