For more than a year, the pandemic has put a hold on destination fashion events. And with vaccination rollouts across Europe only recently gaining pace, the first show of the cruise season — hosted by Chanel from inside the cavernous limestone quarries of Les Baux-de-Provence in the south of France — remained no exception.

The blinding white walls and pillars stood cold and empty of any crowds. But the vast Carrières de Lumières site proved a blank easel onto which Virginie Viard, the Chanel designer, could project her own answer to the question currently being asked of the fashion industry: What will we wear when this is all over?

As so often with Chanel, inspiration for the future came from looking back at the life of its founder. In the show notes, sandwiched between snapshots of local Provençal flowers, were the letters of Coco Chanel and her friend Jean Cocteau, who had used the quarries as the backdrop for his 1960 film “Testament of Orpheus.” A black-and-white film with occasional splashes of color, it was listed as a key influence on the collection. 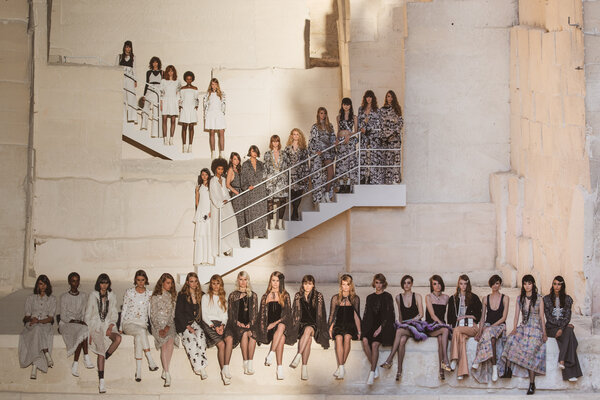 That was clear from the fact that the clothes were almost exclusively monochrome, bar fleeting shots of peach, blue and violet. They were also pumped full of the nonchalant rock-chick aesthetic that has been Ms. Viard’s signature since she took the creative helm at Chanel more than two years ago.

Bouclé tweed skirt suits came teamed with fishnets; bejeweled dog collars and punk shirts were ripped at the navel. Simple white tees anchored leather tassel minis, and sheer logo-emblazoned slips were loaded with the youthful promise of Roaring Twenties nightlife (to say nothing of the rave-friendly quilted mini-bags strapped to the thigh).

To hammer that point home, stars were emblazoned across the shadowy walls of the quarry before the models strode out into the light. They could also be found embroidered in spun gold on the white evening jacket that ushered in a final set of softer caftans in monochrome 1970s-style prints and dresses in ivory lace.

And yet, there remains a lingering hesitancy in Ms. Viard’s creative conviction. Whether these clothes could make one dream — whether they will be what Chanel clients really want to wear when the expected unfurling arrives — ultimately felt unclear.

The seasonal industry calendar also remains undefined. Almost a month and half after the official virtual runway schedule ended, fall ready-to-wear offerings still dribble out and into inboxes. Like last week, when Saint Laurent presented its fall 2021 collection and its own ideas on a post-pandemic wardrobe … silver leather hot pants!

Plus, a series of little bouclé jackets and tweed suits, which earlier this week prompted feisty accusations of copying from the Chanel president Bruno Pavlovsky.

Anthony Vaccarello, Saint Laurent’s designer, had set the whole thing against an endless windswept shoreline of towering black cliffs, mossy green tundra and rivers speckled with ice floes, amid which the women in their finery picked their way like glamorous refugees from a disco that ended too soon.

It could have been jarring or depressing, but it was actually a little bit trashy and a little bit bougie and overall really kind of fun.

“Serious matters push you to take other things less seriously,” Mr. Vaccarello said in his press notes, and he’s absolutely right. It’s unclear that hot pants really are the future, but it was hard not to smile at the sheer unabashedness of the idea. That moment of levity, in itself, felt worth waiting for.