Rachel Goodwin, a makeup artist in Los Angeles, thinks we’re living through a rare makeup moment. “It hasn’t been this experimental since the 1980s,” she said.

This modern makeup is characterized by an adventurous spirit. Bright eyeliner is applied in doodles or at sharp angles far away from the lash line. Crystals and glitter are layered on top.

The origins of the trend are many. Though social media is criticized as a study in conformity, it has given a platform to those who are creatively inclined. Moreover, the “be yourself” aesthetic of Gen Z is an increasing influence.

For weeks last summer, the makeup on the HBO teen drama “Euphoria” was all anyone could talk about. On the show, makeup conveys mood and character through looks like bright watercolor eye shadow, black-lined red lips and gold-foiled eyebrows, temples and lids. Now its styles have entered the mainstream.

Ms. Goodwin describes a tension that she said has almost always existed in makeup: polite looks meant to make the wearer conventionally “pretty” to others contrasted with makeup that functions primarily to express the mood, ideas and tastes of the wearer.

“They’re being playful,” she said of the latter, “and not necessarily looking for external validation, just expression of a sense of identity.”

It’s a sensibility that all of us, from boomers on down, should be able to get behind. Here, in celebration of the holiday season, Ms. Goodwin shows us how to join the makeup party.

Despite (or maybe because of) the festive spirit of the season, you may still need a little boost to get out the door. Makeup can help. “This kind of makeup creates a feeling of wonder,” Ms. Goodwin said. “It’s rainbows and sparkle and has a childlike quality. You start to embody that.”

She covered the lid with a mix of gold and iridescent Lemonhead LA glitter gel and scattered a rainbow of Swarovski crystals on and just outside the lids.

“I amped up the look with a bright color on the water line,” she said. “You can use any color — purple, green, blue — but it’s an easy way to add color for women who are overwhelmed by eye shadow all over the lid.” 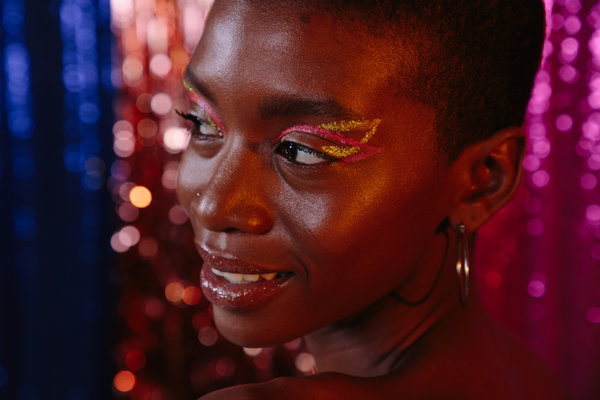 This pink and yellow neon eyeliner channels the color layering and experimental shapes in abstract art, Ms. Goodwin said. Liquid liners create sharp lines that are long-lasting. To get this effect, she used Diorshow On Stage Liner in matte yellow and matte pink, $30.50 each, to draw two rounded triangles.

To replicate her shapes, start at the inner corner of the eye and continue up into the crease, angling your liner toward the tail of your eyebrow. Connect that line back down to the lash line, coming in about a third of way.

It’s not about perfection, but wobbly lines do happen. If that’s not the look you’re going for, use a Q-tip with a little foundation for cleanups. Makeup remover will erase all of your other work.

Ms. Goodwin added Lemonhead LA glitter on top of each line. She said that “avant-garde” eyeliner like this, and unexpected makeup in general, gives its wearer an opportunity to create a look that’s emotionally expressive. “As long as it feels how you want it to feel, you’ve been successful,” she said.

There is playfulness inherent in using nontraditional materials. “I wanted to showcase that here,” Ms. Goodwin said. “It’s not always about eyeliner, lipstick and eye shadow.”

She cut a sparkly fabric found at a craft store into triangles, then used eyelash glue to apply them as cat-eye “wings.” Multicolored Swarovski crystals line the lid crease.

She finished the look with a “power blush,” a Kevyn Aucoin Neo-Blush in Sunset, $38, and pearlescent gloss (Fenty Beauty Gloss Bomb Universal Lip Luminizer in Diamond Milk, $18), topped with gold glitter. “Together, it all looked like she just had to go out dancing,” Ms. Goodwin said.

Lips Can Be Fun, Too

Much of adventurous makeup happens on the eyes. Ms. Goodwin wanted to show that the lips can be unexpected, too. First she applied a bright matte red, MAC Retro Matte Liquid Lipcolour in Feels So Good, $22.

“This is one of those liquid paint lipsticks,” she said. “You don’t want to be touching up a lip like this because it’s more dramatic. Glosses move around and don’t last.”

She lined the bottom and top borders of the lips in gold and topped that with gold glitter. The line is wider in the outer corners and narrows toward the center of the lip, when it ends. It’s a modern take, rather than a stark ’90s-inspired lip liner.