LONDON — A few weeks before her London Fashion Week show, scheduled for Sunday, the prizewinning fashion designer Grace Wales Bonner was wandering around a show of a different kind at the Serpentine Sackler Gallery here.

Titled “A Time for New Dreams,” it was full of photographs, sculpture, sound, film and even a shrine-like meditation space, and had been curated by Ms. Wales Bonner and the gallery staff, conceived as a kind of backdrop to her coming fall collection show.

Understand the one, she suggested, and you would have a better understanding of the other. For anyone trying to answer the perennial question of “where in the world did that designer come up with that idea?” the exhibition is effectively a primer on a fashion creative process.

“It’s important that there is no hierarchy between practices,” said the 28-year-old, who was wearing a Céline skirt (old Céline) and a shirt of her own design as she walked through the space, explaining how the exhibits by, or about, her literary and artistic heroes inspired her work.

According to Ms. Wales Bonner, they provide “an insight into my mind, how I put things together but also the context within which the characters and the collection emerges.”

So here were two cloth sculptures by Eric N. Mack, a Bronx-based textile artist and painter chosen because, Ms. Wales Bonner said, “his work connects to research I did in textiles and how you can integrate rhythm into aesthetic practice.” Mr. Mack also created a backdrop installation for the designer’s fall 2018 show, and worked with her on a hand-painted madras checked shirt for her spring 2019 collection.

Nearby were two day beds — red oak frames covered in authentic zebra skins — by the conceptual artist Rashid Johnson, based in New York. Ms. Wales Bonner said the beds reminded her of simple wooden altars as well as “suggesting an environment that a sophisticated black leisure class would inhabit,” while the Persian rugs beneath each “give a sense of grounding and connects to different histories.”

Elsewhere, a sound installation by Chino Amobi, the Richmond, Va.-based musician, artist and co-founder of the NON Worldwide record label, worked to “acknowledge where you come from and how you got here and all the people who have sacrificed or created work to give other artists, younger artists freedom,” Ms. Wales Bonner said. (One of Mr. Amobi’s sound works created last year was called “Ancestors.”) And then there were the texts by the Nigerian novelist Ben Okri — one of Ms. Wales Bonner’s favorite writers, whose 2011 collection of essays, “A Time For New Dreams,” gave the exhibition its title — scattered across the gallery’s white walls.

The idea for the exhibition and for the 70-piece collection, Ms. Wales Bonner said, was to stretch her usual focus on black masculinity and sexuality — she began as a men’s wear designer — to explore the life of the black intellectual. And the challenge, she added, was how to communicate cerebral ideas via clothing and organic materials.

She said she thought about Howard University, the historic black institution in Washington, D.C., whose chamber choir soundtrack is included in Mr. Amobi’s installation. Which led her to collegiate dressing in the 1980s, the era of many of the artistic and literary figures featured in the exhibition. Which led to the actual fashion, including her variations of varsity jackets, Oxford shirts, the Mac raincoat and even a white tuxedo.

“I was looking at the ways that you can kind of embed those very American pieces of clothing with a sense of magic or sense of ritual that comes from Africa,” Ms. Wales Bonner said. “So embroideries have a sense of magic.”

In practice that meant that the kind of sequined flags used to evoke spirits in Haitian voodoo ceremonies were embroidered onto a varsity jacket, and the names of literary works and their authors, rather than the usual athletic team insignia, were emblazoned on sports shirts. 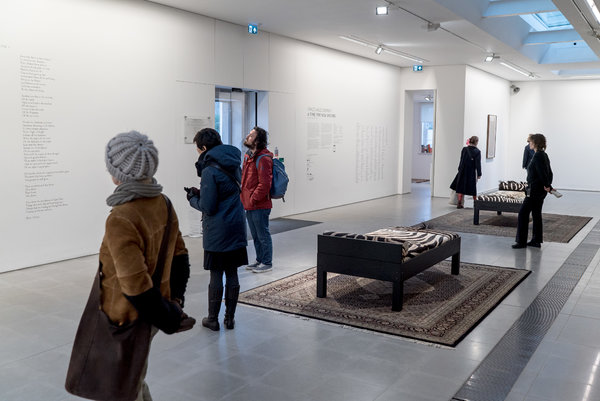 But the designs, which include some women’s wear, were interpreted “in a way that I feel that is relevant to this time,” Ms. Wales Bonner said.

So David Hammons’s thick herringbone coat, which the American artist wore in the 1980s, has become a herringbone jacket with voodoo-inspired feather trims, and also inspired a trucker jacket with leather patches and an oversize coat. And Mr. Okri’s scarves, an accessory he has favored for years, are referenced in the collection’s scarves. Fabrics made by Mr. Mack, reflecting the same collaging and dyeing techniques he uses to transform old scarves into textile sculptures, were used for a kimono, pajamas and shirts.

Early plans are for the fashion show, to be held in the gallery the day after the exhibition closes, to be a moving presentation created by M.J. Harper, the dancer and choreographer who frequently collaborates with Ms. Wales Bonner, rather than a traditional runway march.

The goal is to communicate the same connections expressed by Trent Lafond, a 20-year-old model who wore the collection’s kimono at the exhibition’s preview. “I’m aware it’s an artwork,” he said of the garment. “But the first thing I noticed was how comfortable it is, so it makes me feel more confident.”