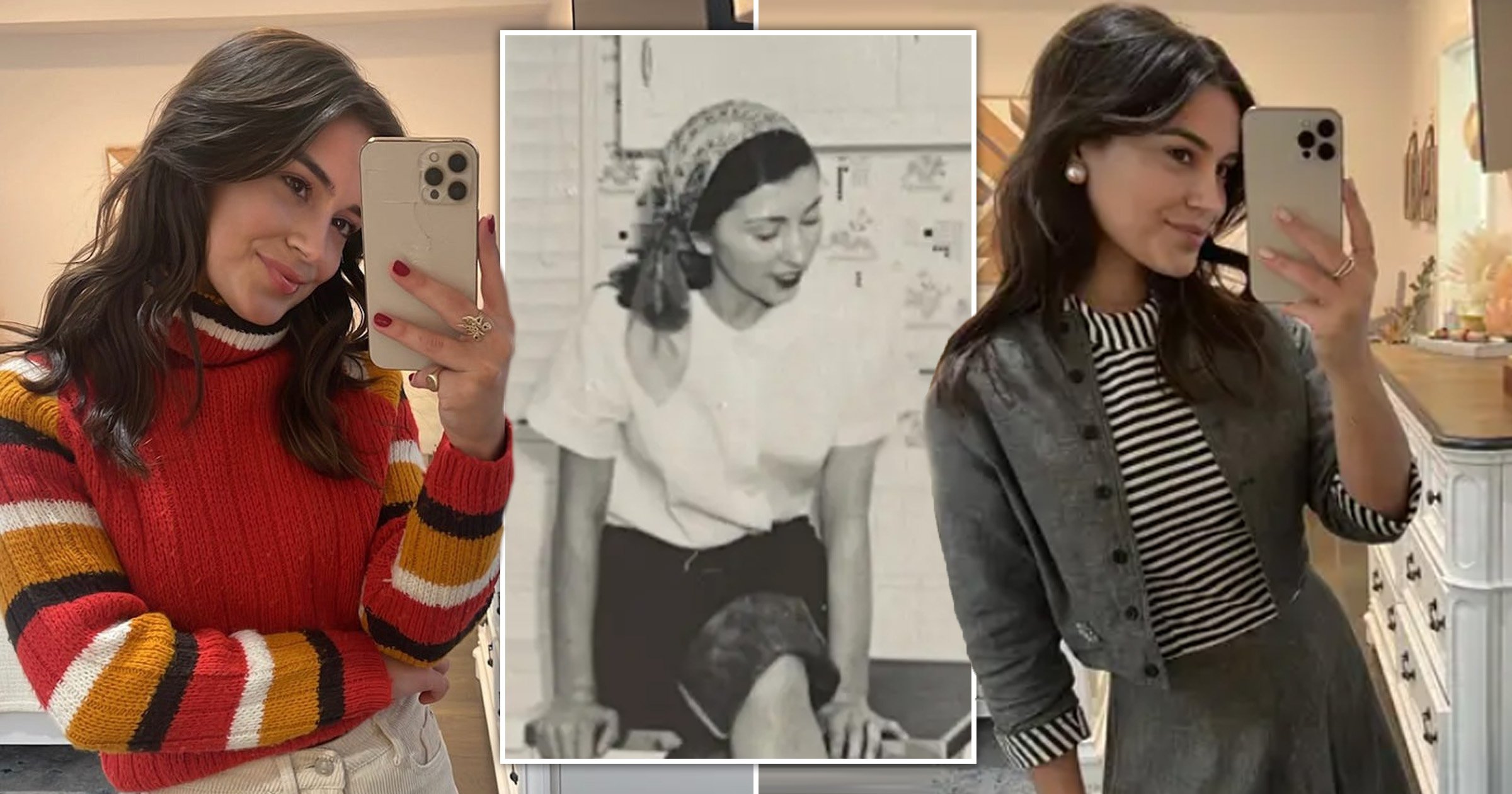 Vintage fashion is all the rage, and one woman lucked out after discovering a treasure trove of her grandmother’s old clothes – dating back to the 1950s.

27-year-old Maddy Bill won’t have to spend her weekends trawling Vinted or charity shops, after she found a suitcase filled with outfits her grandmother wore during her honeymoon in 1952.

Now, she’s impressing her followers on social media by modelling all the classic looks.

Her grandparents, Marie D’Allesandro Donato and Anthony James Donato, went to New York for their honeymoon after they were wed in the 50s.

When they got back, Marie washed the clothes she wore on the trip and put them back into her suitcase, and never touched them again.

Now, seven decades later – Maddy was delighted to find the barely worn garments and try them all on.

‘My grandmother kept all her honeymoon clothes in this suitcase to this day. Opening it up 70 years later,’ she wrote in a clip on TikTok.

She also shared old pictures of her grandma, who is now 91, wearing the same clothes, all those years ago.

So, why didn’t Marie ever open up her suitcase again after the honeymoon? She told Maddy it was because she wanted to preserve one of her favourite memories and pass the garments on to her daughter, Maddy’s mum.

However, Maddy said her mum never opened it because she wanted to save it to experience with her daughter.

‘When my mom and I opened it up, it was like all the photographs I saw of my grandma growing up came to life,’ Maddy said.

‘It was remarkable because I felt like we were bringing the past to life. Everything is honestly in pretty amazing condition.’

The first thing she tried on was a black, button-down dress, which her grandma had worn to dinner on her honeymoon.

‘I always remember seeing the photograph of my grandmother in the dress growing up, but I never saw the physical dress,’ she said.

‘I can’t even describe the feeling of putting it on for the first time and having it fit perfectly.’

A black and white, striped shirt and a gray jacket and skirt was the next outfit – the look her grandmother had worn on the train from Pennsylvania to New York.

Another favourite look of Maddy’s was her grandmother’s red and white, polka dot bandana, as well as pieces of her jewelry, including a watch, necklace, bracelets, and a few pairs of earrings.

There was also a vintage night gown made of a sheer material in a stunning pastel green.

‘This is absolutely stunning. I want a bunch of vintage night gowns like this to lounge around in,’ commented one woman on the video.

‘My grandmother doesn’t understand TikTok, but I explained that people all over the world are infatuated with her fashion sense and see her as a fashion icon,’ Maddy explained.

‘This video going viral was my way of showing the world how stylish and amazing she is.’

Now, Maddy wants her daughter to experience the same thing some day, so she re-packed all the clothes into the suitcase to pass on.

‘My grandmother took pride in the way she presented herself, and I think this is a wonderful thing and what I hope to emulate in my life,’ she added.

‘I’m glad I got to share my grandmother and her fashion sense with the world and shine a remarkable light on a woman that truly deserves it.’