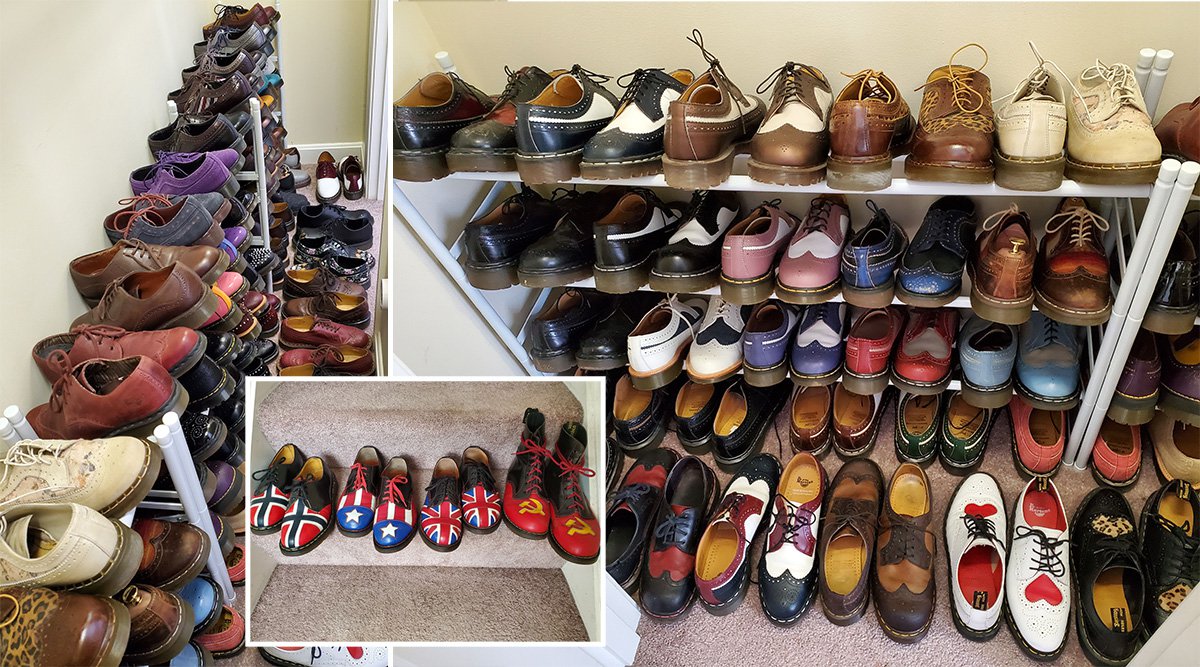 The 61-year-old has spent the last three years collecting 152 pairs of Dr. Martens shoes after taking a shine to the brand’s brogues.

A former university finance manager, Matty has sourced extremely rare and unique Dr Martens footwear from across the world.

Some finds include a pair of Horween Brogues, two pairs of Crazy Bomb Shoes, a pair of Vintage Derby Shoes and Anilmorbido metallic leather brogues, all of which are no longer in production.

From Ashland, New Hampshire, Matty is also an expert bargain hunter and has found some of her favourite fears by searching through second hand sites such as Facebook Marketplace and eBay.

She even managed to bag a pair of Dr Martens/Fluevog collab brogues for just £4.42.

‘I’ve always loved the Dr Martens brand, and always wanted to have a pair when I was a child,’ Matty says.

‘I got my first pair of the classic 1461 shoes in the 90s and I picked up the odd pair here and there over the years.

‘But as with most things, you end up growing out of things, so eventually, my shoes from the 90s didn’t fit anymore.

‘I started to have a look online in 2019 at different styles of Dr. Martens after seeing a woman at a conference wearing a really nice pair of black and white brogues.

‘I found the same pair on eBay and bought them for myself, and found that I wore them everywhere, which led me to look at more styles.’

She continues: ‘My collection truly started to gain speed when I joined a Facebook group full of Dr. Marten lovers, you might say it was the catalyst, because here I am, three years later with 152 pairs and counting.

‘I just love the range of styles and collaborations that Dr. Martens do, and with so many designs, I can mix and match my outfits with a different pair each day.

‘I usually choose a pair of shoes the night before, and then match my outfit to the shoes design.’

Having made some smart purchasing choices, Matty’s collection is now worth more than double what she paid for it.

‘One of my rarer most valuable sets of shoes, is a pair of Hammer and Sickle boots with the USSR flag on them. I got them for £73 from Facebook Marketplace, but I saw them advertised for £660 elsewhere,’ she explains.

‘I’ve only ever bought two sets of new shoes, the rest have been bargains I’ve managed to find on resale sites like Poshmark and Depop.

‘I’ve managed to get most pairs for less than £50, with some being cheaper than £7. My most expensive purchase was a pair of Crazy Bomb Boots from Japan £212.

‘I’ve worked out that my collection is worth about 200% of what I paid for it.’