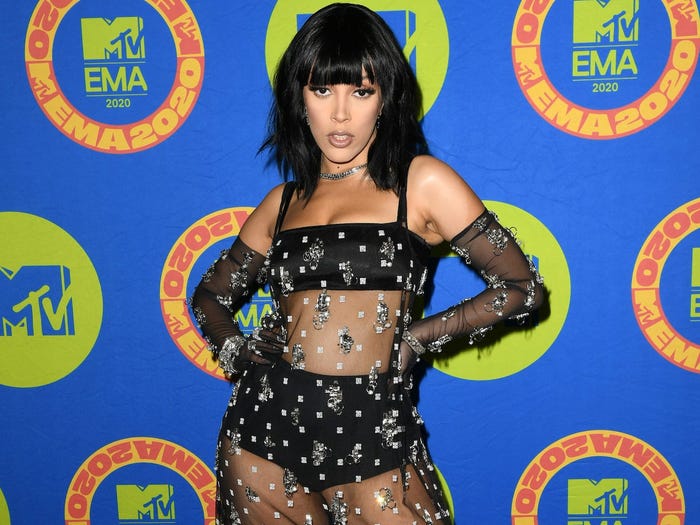 The annual MTV Europe Music Awards aired on Sunday after being previously filmed across various locations.

Though celebrities had to participate from home, they still made sure to dress for the occasion. Bebe Rexha, for example, set up an MTV EMAs backdrop in her garage, and posed in a lace minidress designed by Christopher Kane. Madison Beer, on the other hand, switched from a sparkling brown dress to a white gown with bold cutouts.

Here's a look at 11 of the most daring looks celebrities wore throughout the night. 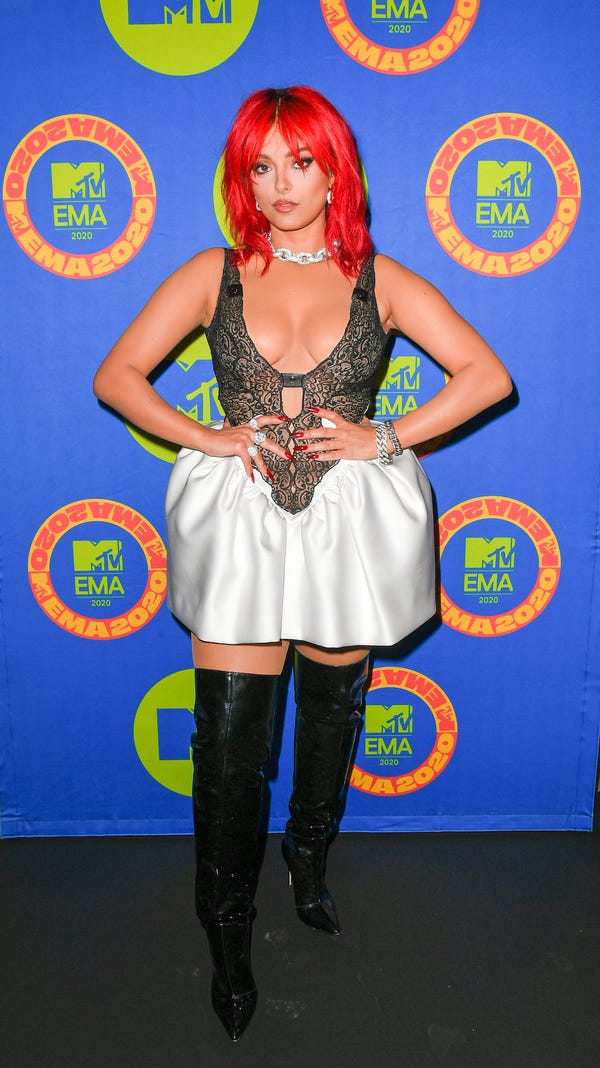 The top of her Christopher Kane dress, which was made from black lace, had a plunging neckline, small cutouts across the abdomen, and a backless bodice. Its skirt, on the other hand, was shaped like a bubble and made from a shining white fabric.

To complete the look, Rexha wore thigh-high leather boots, a diamond choker from Shay Jewelry, and matching rings and bracelets from Loree Rodkin. She posed in front of an MTV EMAs backdrop in her garage to show off the outfit.

Doja Cat opted for a two-piece ensemble with a see-through overlay. 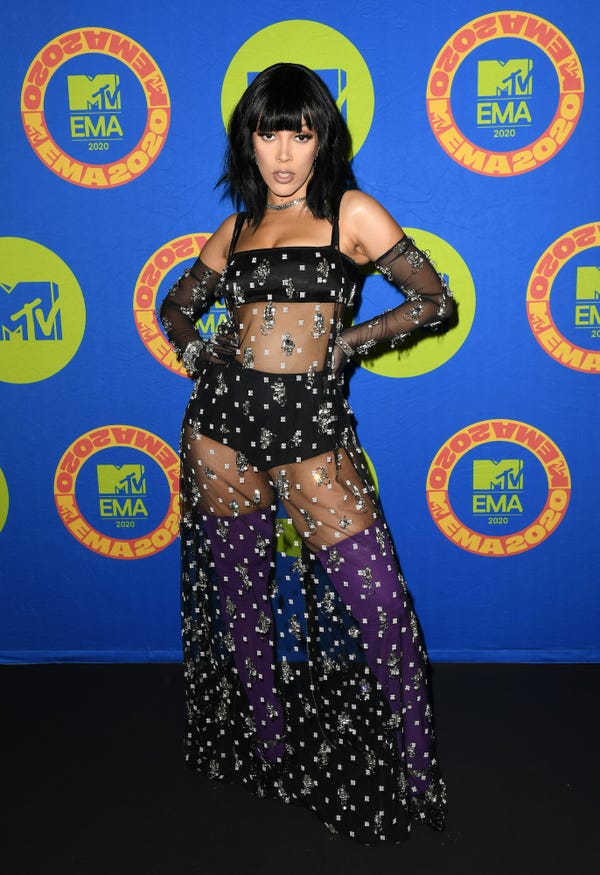 Her Givenchy look included a black bralette, matching shorts, and a see-through overlay with attached, off-the-shoulder sleeves that extended into gloves. The overlay was also covered with crystals, beads, and rings.

The "Say So" singer completed the look with purple thigh-high boots and Neil Lane jewelry. 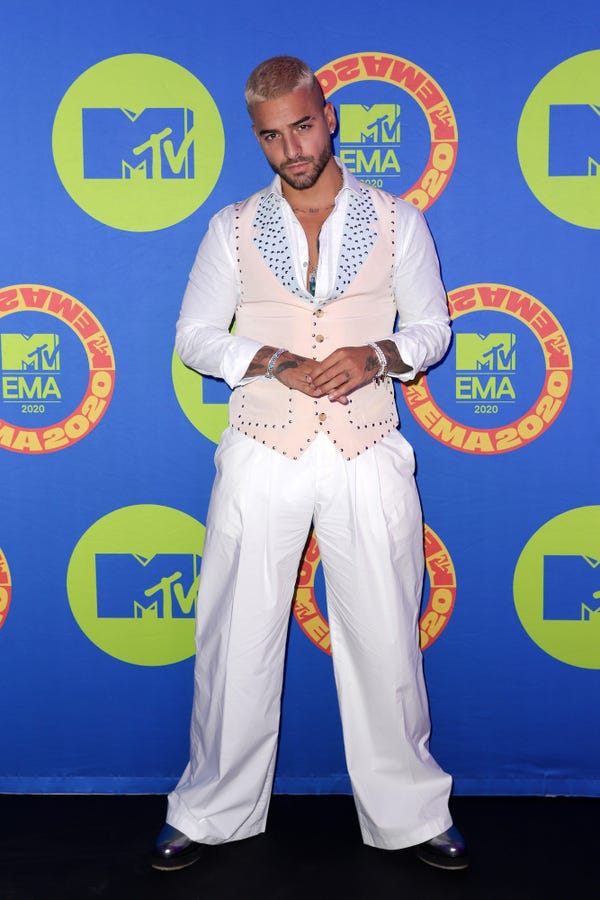 His blush-colored vest, which also had a baby-blue collar, was decorated from top to bottom with silver studs. He also wore a white button-up top, baggy pants, and diamond bracelets.

Maluma's hair perfectly matched his vest, as it was seemingly dyed a light-pink shade.

Madison Beer wore numerous outfits for the awards ceremony, including this satin minidress. 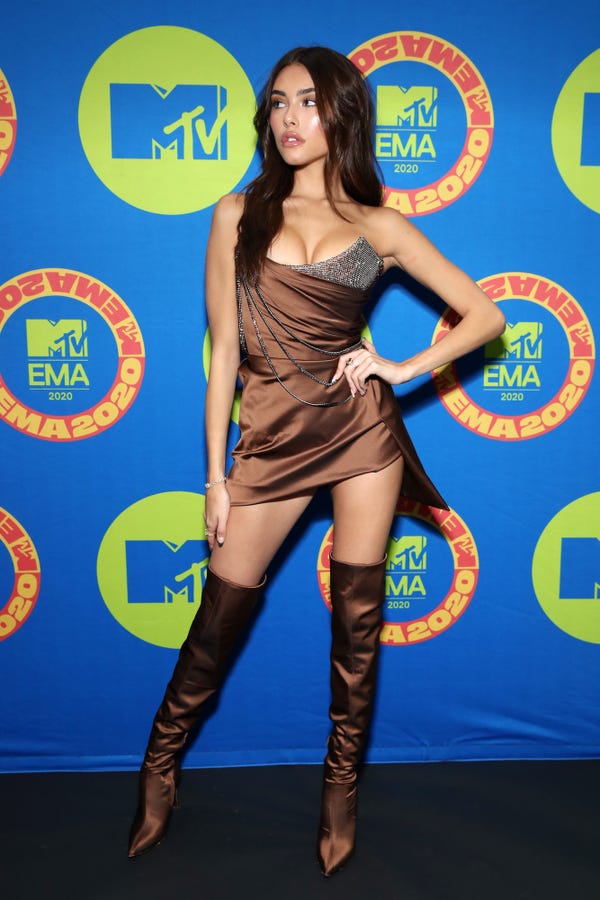 The musician's brown outfit was custom-made for her by Vivienne Westwood. According to the designer's Instagram page, the strapless dress was corseted in the middle, and embellished with smoked Topaz Swarovski crystals.

She later switched into a white dress with a daring bodice and sheer skirt. 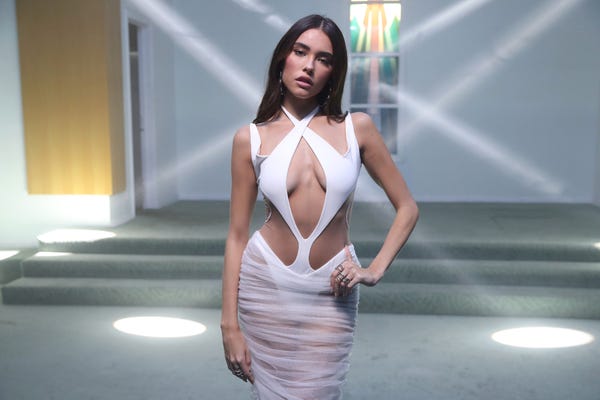 The dress, designed by Mugler, had a halter-style leotard that crisscrossed over her chest and created a daring cutout. The bodice also had cutouts across her neckline, and two more at her waist. Its skirt was equally daring, as it was made from sheer, white fabric.

Yungblud posed in a cheetah-print straitjacket and matching pants. 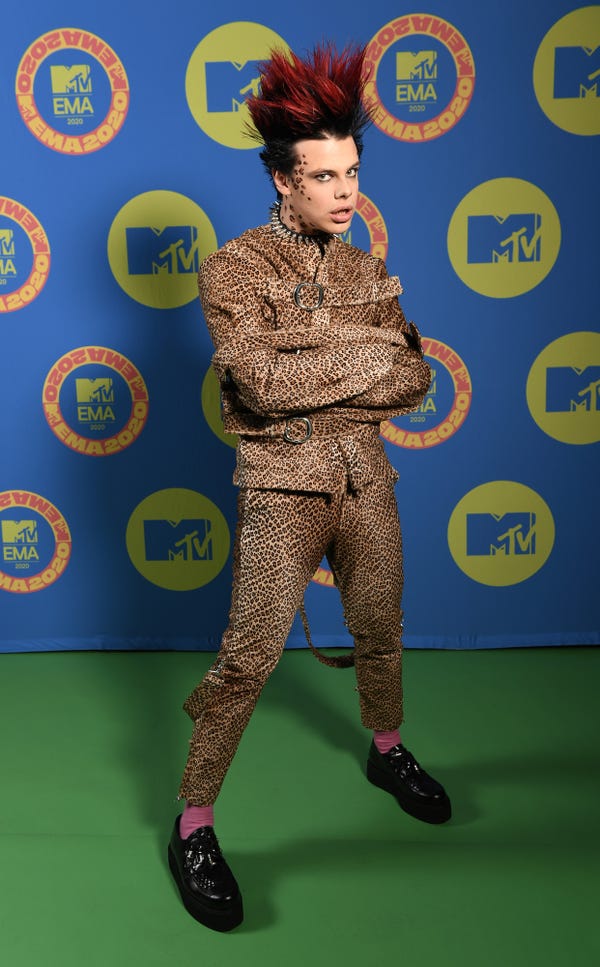 The musician's two-piece outfit was custom-made for him by Chrome Hearts. He paired it with pink socks, black shoes, and a studded choker necklace. 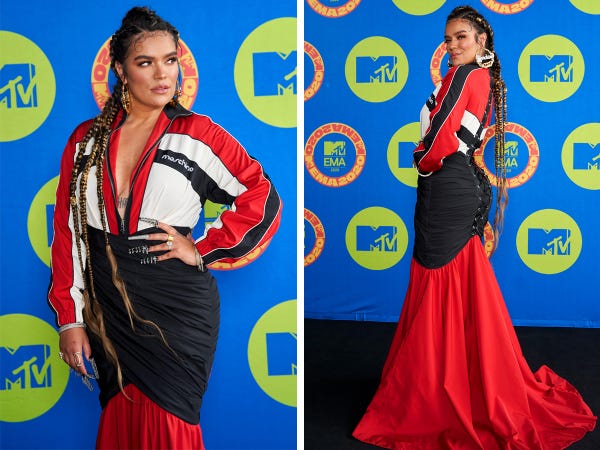 The red-and-black dress, designed by Moschino, has a jacket-style bodice made from nylon, and a mermaid skirt that ties in the back. It's available to purchase at the time of writing for $3,450.

To accessorize the look, the musician wore long braids, hoop earrings, and nails covered with crystals and chains.

Rita Ora matched her headband to her shoes for the EMAs. 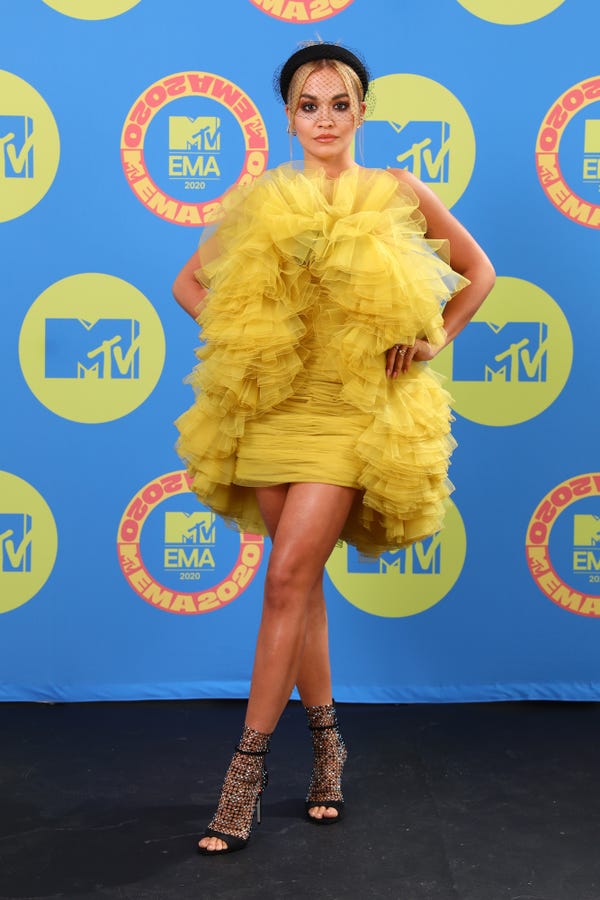 Her black headband had a mesh veil that perfectly matched her open-toe heels, which had layers of mesh that almost looked like socks.

Ora also wore a yellow minidress with an arch of ruffles designed by Giambattista Valli.

Perrie Edwards of Little Mix embraced the no-pants trend for a look that included ruffles and sheer tights. 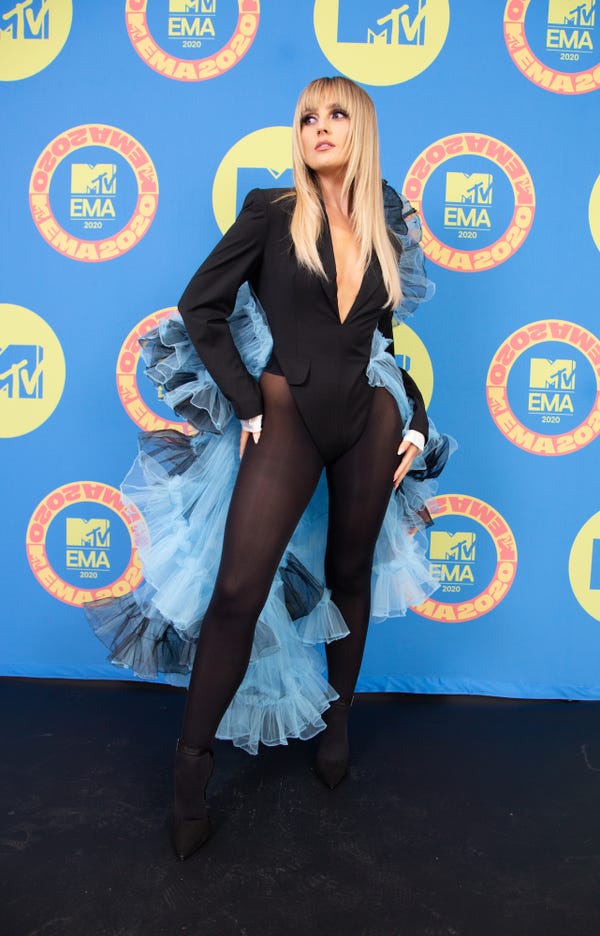 Her bold outfit was designed by ACT N°1. It included a black, blazer-style leotard with shoulder pads, a plunging neckline, and blue ruffles that extended from her shoulder to her ankles.

Jade Thirlwall did the same in a pink, patterned outfit and clear shoes. 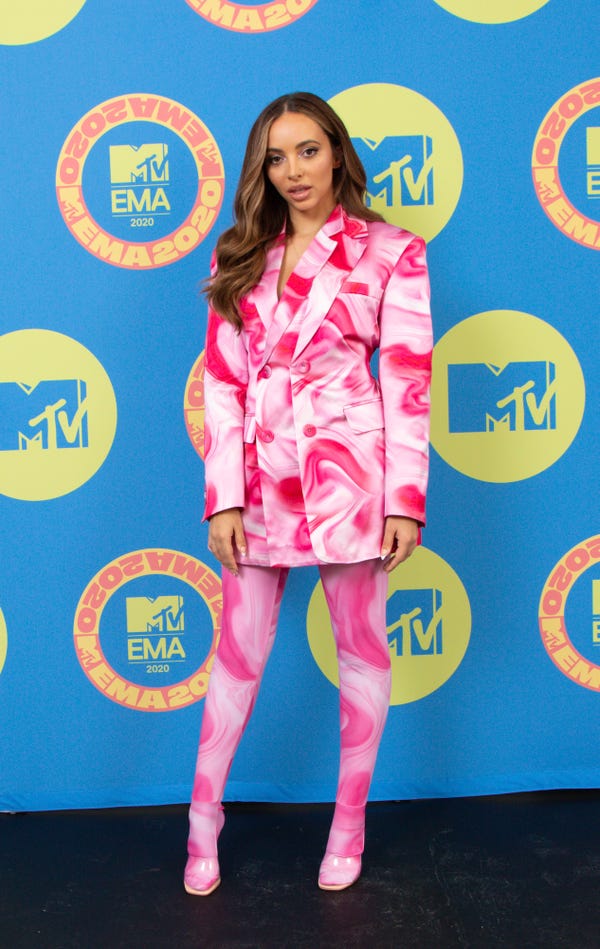 Both her swirled, double-breasted blazer and matching leggings were created by Annakiki. The Little Mix member also wore see-through sandals, which created the illusion that her shoes matched her suit. 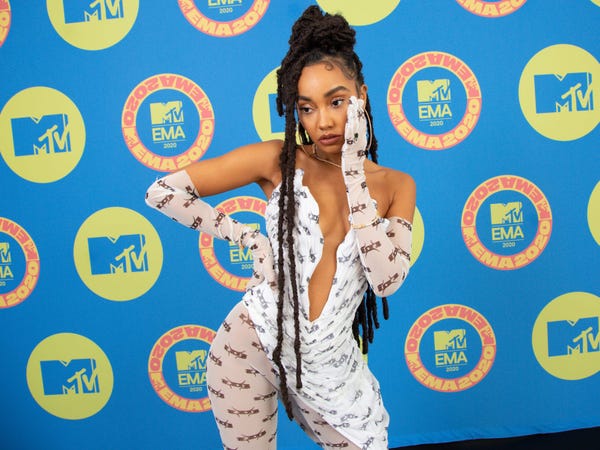 Her outfit, which was custom-made by Luis De Javier, had an asymmetrical bodice with a plunging neckline over semi-sheer leggings. Pinnock also wore matching gloves, and clear sandals.