The grand State Theatre at Melbourne’s arts centre will be closed for more than two years, starting in 2024, for a major renovation that will include new restaurants and bars, new surrounds, improved acoustics and a vital upgrade to the backstage infrastructure.

Preparatory works for the upgrade were part of a $1.4 billion plan announced in 2020 that focused on building a new NGV Contemporary art museum next door. The new announcement, of an extra $241 million, takes the budget for the whole precinct to more than $1.7 billion. The government did not say what fraction of this is for the Arts Centre work.

Design for the theatre revamp began in 2018 when Melbourne’s NH Architecture and Norwegian firm Snohetta were commissioned to come up with a plan.

Fast-tracking the full State Theatre project is expected to halve the length of time it takes, meaning a shorter closure and less disruption for visitors and the major arts companies who use the venue, including Opera Australia and The Australian Ballet.

Arts minister Danny Pearson said it was “time now to make the necessary investments to restore this grand jewel to its former glory”, to make it an appropriate venue for the blockbuster shows they want to attract to the state.

“They will be banging down doors to come here,” he said.

Most theatre patrons will never see one of the biggest features of the refit: two new lifts for trucks delivering sets down four flights to the State Theatre’s stage. 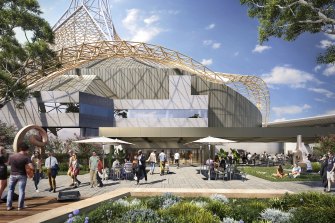 Computer renders of the revamped entrance at the Arts Centre Melbourne.

The theatre, built 40 years ago to be the jewel in the crown of the state’s venues, has suffered from an Achilles heel: just one backstage lift big enough to bring in sets, a second-hand machine that was old even when it was installed. When it breaks down – which it does – it puts expensive productions in peril.

Audiences will see improved accessibility for people with disabilities in particular (wheelchairs currently have to come through a difficult, back-of-house route), and for patrons in general with new aisles and lifts. While State Theatre capacity will stay close to the current 2000, the original seats will be replaced to meet “contemporary comfort and standards”, Spencer said.

Upstairs a new restaurant and bar at the northern end of the building will overlook a new “public realm” courtyard, facing towards the city and Hamer Hall. 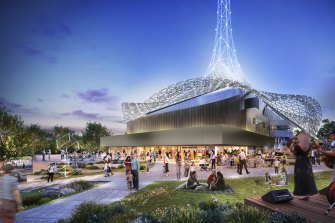 The designs include a new “public realm” outside the building.

Experts will be consulted to improve the acoustics of the theatre, making the sound clearer. Artist and audience expectations in this area have lifted over the years, Spencer said.

But they will not mess with the decor: “It’s heritage, it’s part of the personality of the theatre,” she said. In 1979 John Truscott, an Academy Award-winning film and stage designer, came up with the State Theatre’s current red and brass theme (including 75,000 brass cups fitted to the ceiling netting, each of which is drilled with holes to accommodate the sprinkler system). “It’s very theatrical and opulent and that will stay.” 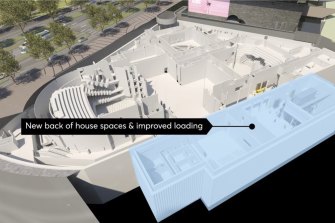 Under the skin: a look at the backstage plans for the renovated Arts Centre.

There will also be work on the building’s foundation and basement to improve corrosion prevention.

The Arts Centre was a problem right from its conception: ideas were first mooted in 1943 but a master plan didn’t come together until 1960. Then builders discovered geographic problems at the site, where a river flowed thousands of years ago, which led to separating the concert hall into its own building and raising the theatres up a couple of stories.

A building tender will go out within weeks, with work due to start in late 2022.

The government has not yet announced timing or funding for the next stage of the precinct’s transformation, including a new building at 1 City Road which will feature studios and workshop spaces, an expanded Australian Music Vault and a new gallery to showcase the Australian Performing Arts Collection.

The Booklist is a weekly newsletter for book lovers from books editor Jason Steger. Get it delivered every Friday.