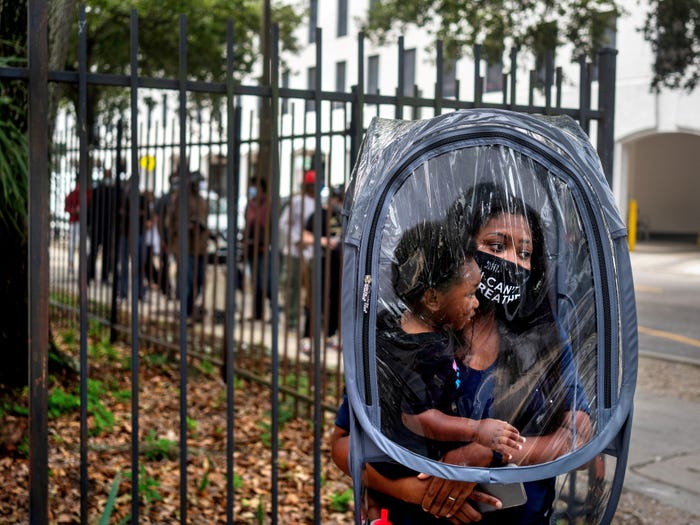 This year began in crisis with the Australia bushfires that burned more than 17.9 million acres of land.

By January 2, New South Whales declared a state of emergency — and Victoria a state of disaster — over bushfires that began in 2019 after the driest spring on record, Insider previously reported. About 18 million acres burned, Insider reported in February.

Later in the year, wildfires ravaged the west coast of the US. More acres of California burned in 2020 than any year prior. 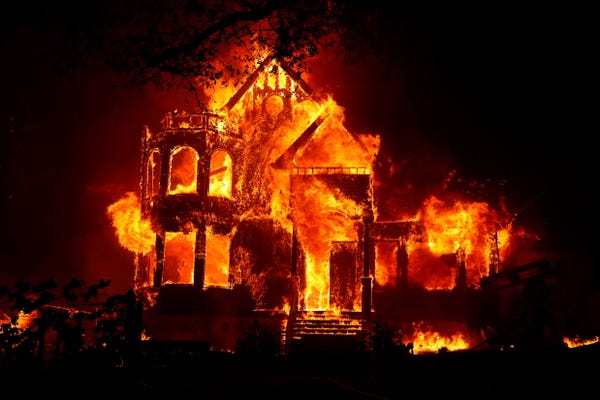 The fires, which began in late July, burned 4 million acres of California by early October.

"The 4 million mark is unfathomable. It boggles the mind, and it takes your breath away," Scott McLean, a spokesman for the California Department of Forestry and Fire Protection known as Cal Fire, told The Associated Press.

Wildfires in Oregon broke records, too. 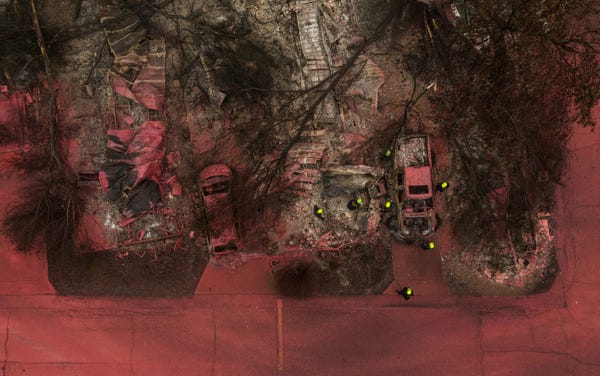 Gov. Kate Brown said five towns in Oregon were destroyed in the fires at a news conference on September 9, Insider previously reported.

"This could be the greatest loss of human lives and property due to wildfire in our state's history," Brown said.

Fires weren't the only natural disasters in 2020. In the Philippines, a volcano erupted on January 13, and more than a half-mile of ash shot up into the sky. 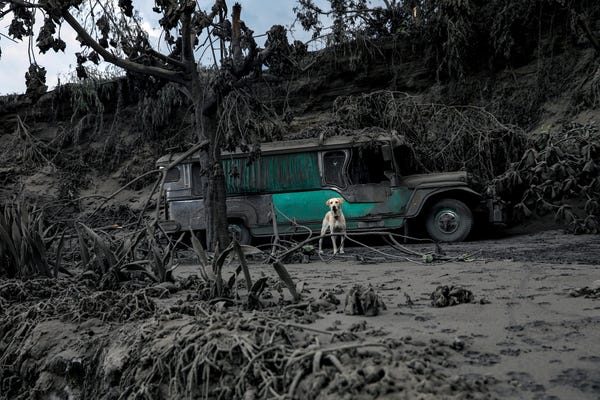 In Japan, a summer flood killed at least 50 people and destroyed parts of Japan's southern region of Kyushu. 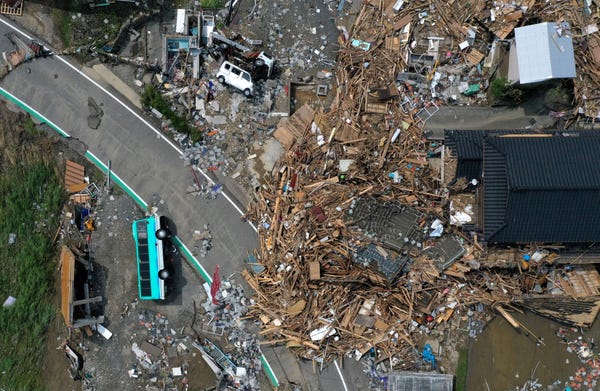 Days of continuous rain triggered the flood, The Associated Press reported on July 6.

Also in 2020, deforestation in the Amazon continued to ravage the area. 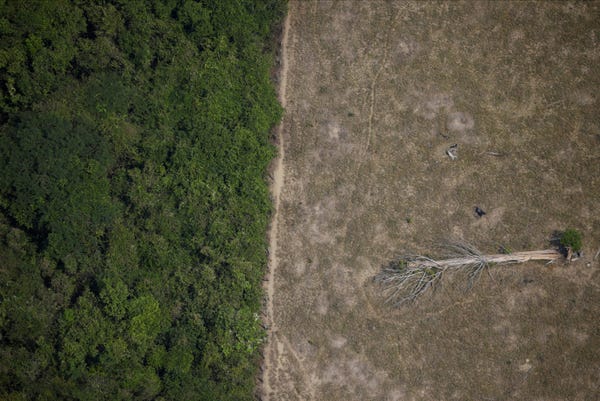 The Amazon's record-breaking 2019 fire season shed light on deforestation, where farmers clear sections of the forest for agriculture. Alberto Setzer, a senior scientist at Brazil's National Institute for Space Research (INPE), told CNN that humans start 99% of fires in the Amazon.

In late 2020, deforestation in the Amazon increased.

While there was 6% less deforestation in the Amazon in the first 9 months of 2020 than the same time frame in 2019, in October 2020, deforestation rose 50% from the previous year, per Reuters.

Temperatures in Antarctica continued to increase this year, and these penguins' main source of food swam south, leaving them hungry. 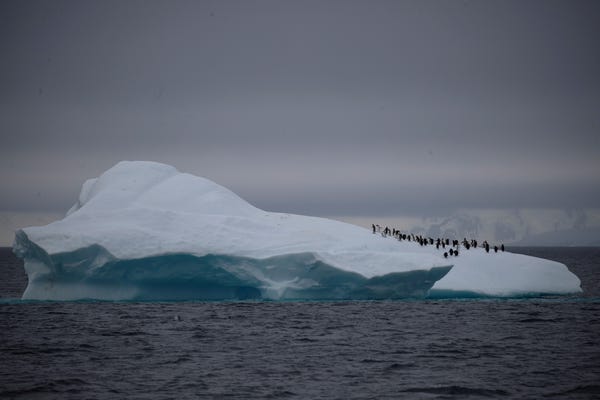 Some records were broken in 2020. Billie Eilish, 18, became the youngest person ever to win the Grammy's Album of the Year. 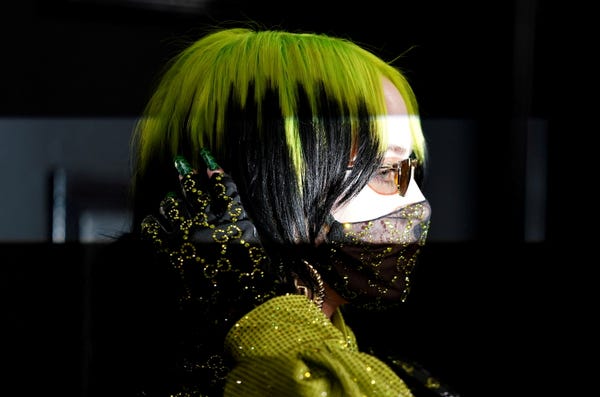 Billie Eilish won four more Grammy's in 2020, too, including song of the year for the hit "Bad Guy", best new artist, best pop vocal album, and record of the year, Insider reported in January.

This was a big year for the #MeToo movement as film producer Harvey Weinstein was found guilty of third-degree rape and first-degree criminal sexual act in February. 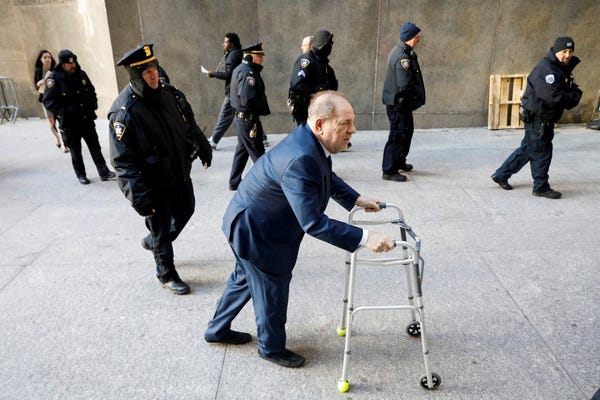 Weinstein's early-2020 trial was a huge moment for #MeToo. He's the most notable figure that has been taken down by the movement, Vox reported in February.

At the same time, Weinstein was acquitted on the two most-serious charges that could have landed him a lifetime in prison, Insider previously reported.

The most defining event of 2020 has been the ongoing coronavirus pandemic, which began in Wuhan, China, and spread across the world. 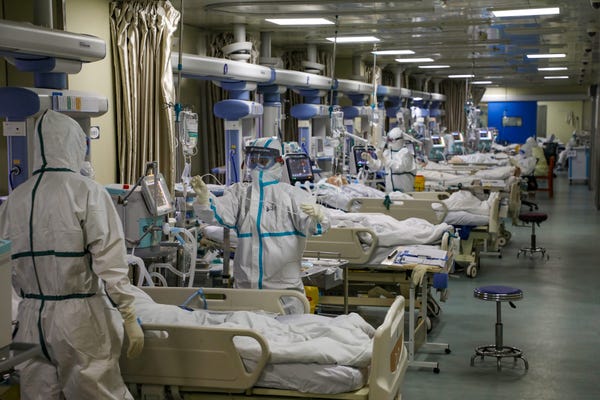 Wuhan, China, went into quarantine on January 24 in light of the coronavirus, Insider previously reported.

The virus doesn't show symptoms in everyone, but it can be deadly. Insider reported that more than a million had died of illness related to the coronavirus in September. 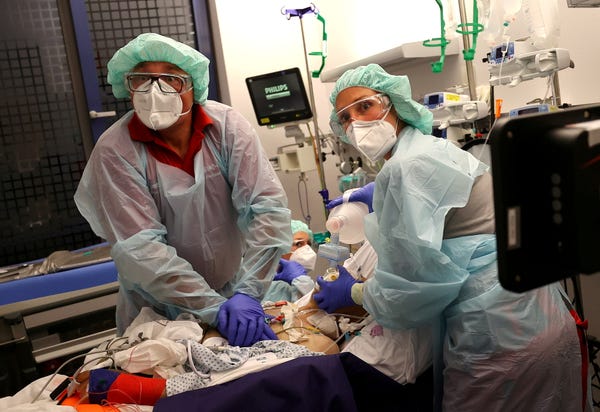 Transporting critical patients by helicopter as opposed to driving could be the difference between life and death, Reuters reported in the spring.

The pandemic shed light on the importance of medical professionals and frontline workers across industries, from nurses to couriers. 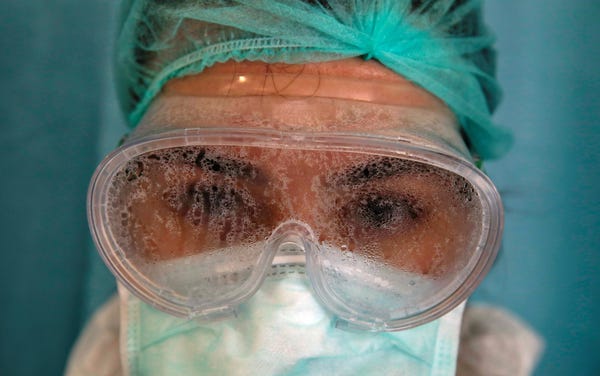 In the summer, healthcare workers on the frontlines of the pandemic had to endure PPE shortages to fight the coronavirus, per Insider.

Many healthcare workers have died of the virus, while others have separated from their families to keep them safe. 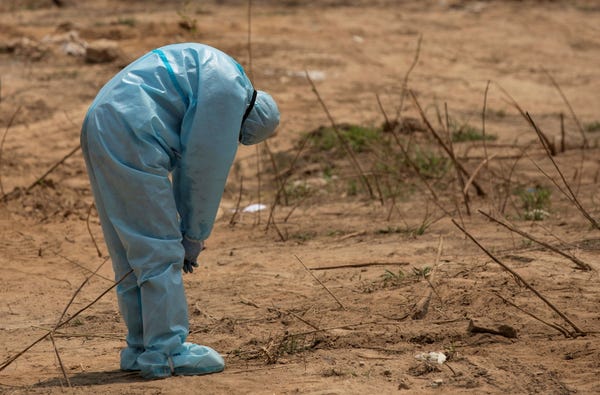 Kaiser Health News and the Guardian reported that more nurses have died of coronavirus-related illness than any other healthcare professional, per Business Insider.

Millions of healthcare workers separated from their families to keep them safe after being exposed to the virus, Insider reported in the spring. 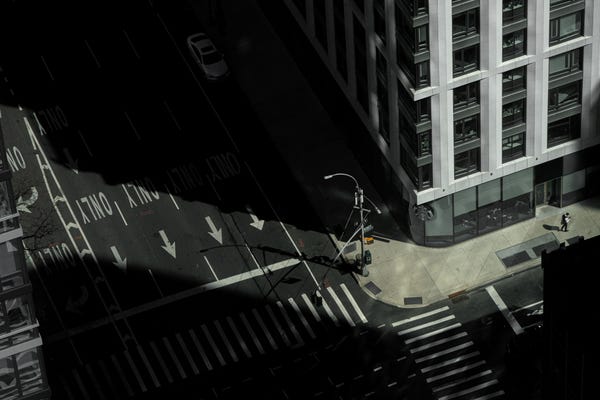 As non-essential businesses shut their doors and people across the world were ordered to shelter-in-place in early-spring, cities like New York looked empty, Insider previously reported.

New York City was known as "Ground Zero" of the pandemic in the US, with daily death tolls exceeding 1,000 in April. 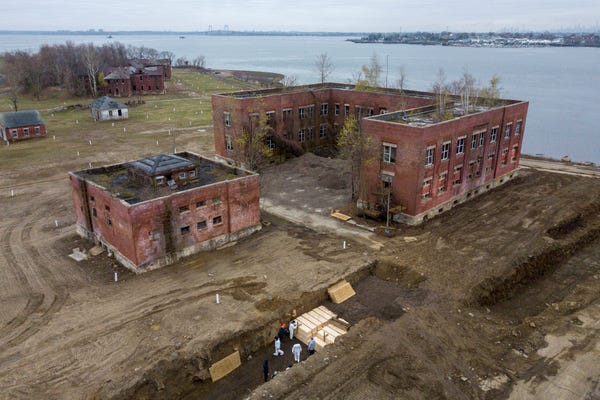 New York City has been called "Ground Zero" of the pandemic in the US. Unclaimed bodies of those who died of coronavirus were buried on New York's Hart Island, a mass graveyard, Business Insider reported in April.

While people were ordered to stay home to prevent the spread, some people protested lockdowns. In some cases, healthcare workers showed up to counter their protests. 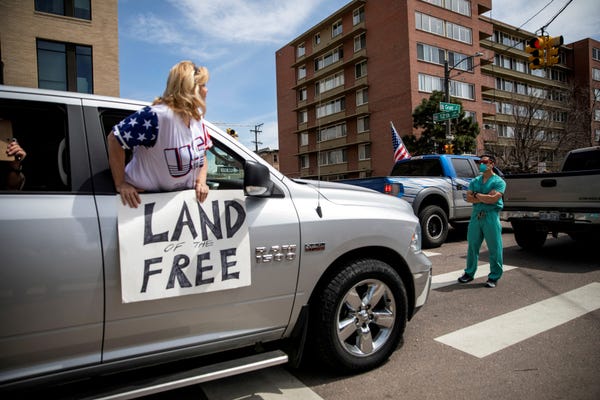 While people in Denver protested the state's lockdown orders in the spring, healthcare workers stood silently in their way, Insider previously reported.

Amid quarantine and stay-at-home orders, people adapted to new ways of working and communicating. 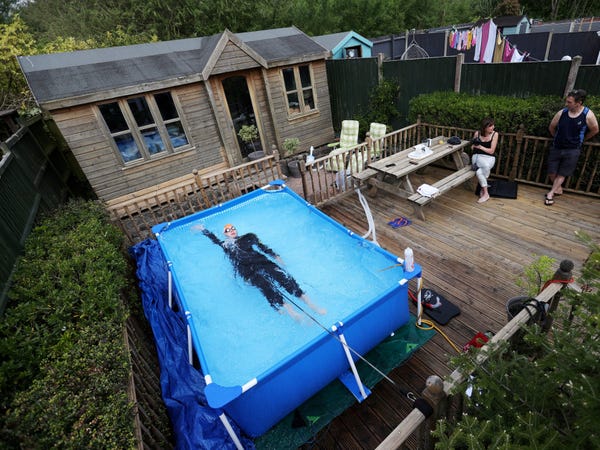 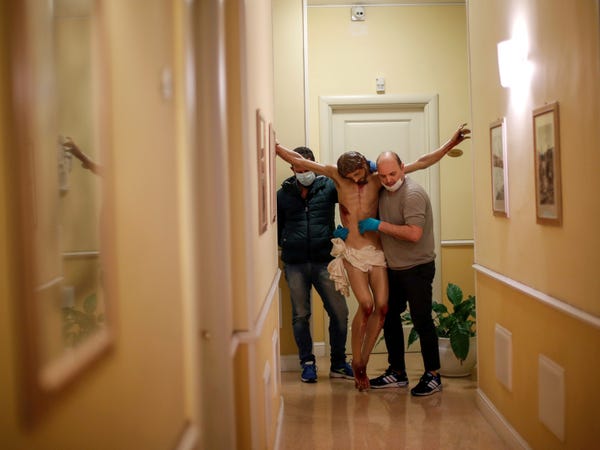 Some Good Friday celebrations took place on rooftops while people nearby watched from their windows and balconies, Business Insider previously reported.

Another defining moment of the year was when police officers killed George Floyd, a Black man, and the world demanded justice. 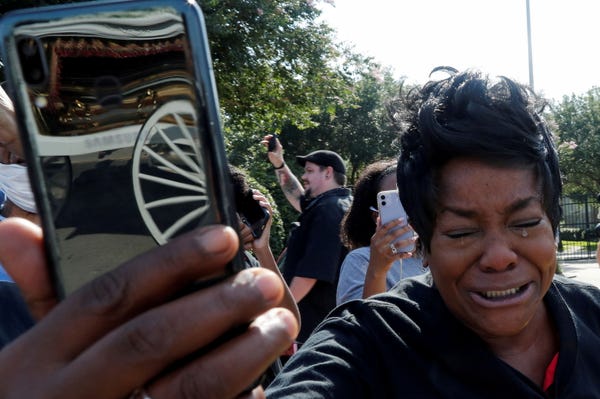 George Floyd's death in late-May involved four Minneapolis policemen, one of whom knelt on his neck for more than eight minutes. Floyd's last words were "I can't breathe," Insider previously reported. 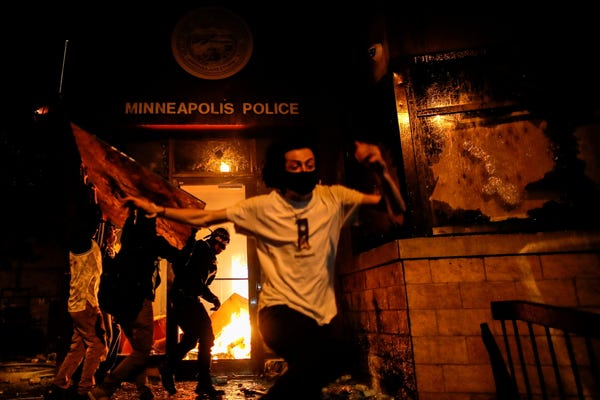 In the summer, protests spread across the US and the world in support of the Black Lives Matter movement, from Europe, to Asia, to South America, Insider previously reported.

2020 was an election year full of heightened political tension. 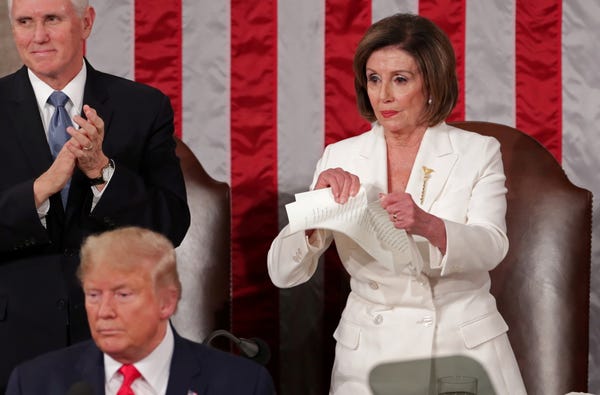 One unforgettable moment was the time House Speaker Nancy Pelosi ripped President Donald Trump's State of the Union address back in February.

She ripped it after he was finished speaking, Business Insider previously reported. Before the speech, Trump appeared to refuse a handshake from Pelosi.

More US citizens voted in the 2020 presidential election than ever before, and some faced wait times of up to six hours 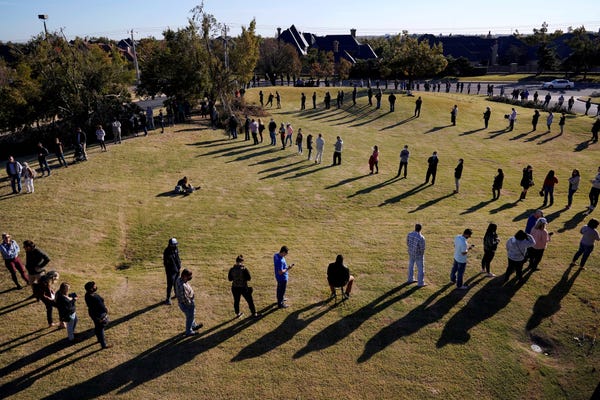 People who voted on Super Tuesday waited as long as six hours to cast their ballots, Insider previously reported.

This photo of a Black woman and her son trying to stay safe while voting went viral in October, and some are calling it "the photo of 2020." 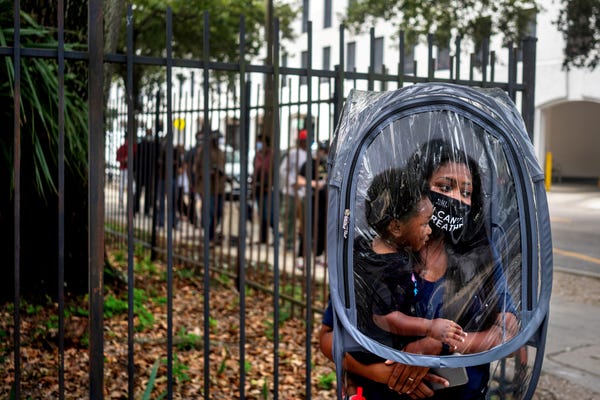 "This is everything, everything that is going on in America with Black people,'" Dana Clark, the woman pictured, told BuzzFeed News during voting season. "It shows the compassion of a mother wanting a better life for her child, standing in line to vote, because this is the only option she has left." 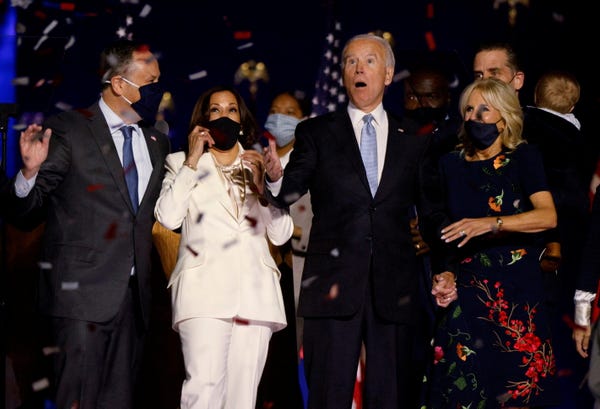 "Bringing Black and South Asian representation to the table, her lived experiences as a woman of color and a daughter of immigrants will offer a point of view in the White House the likes of which this country has never seen," Christian Nunes, the president of the National Organization for Women, previously told Business Insider. 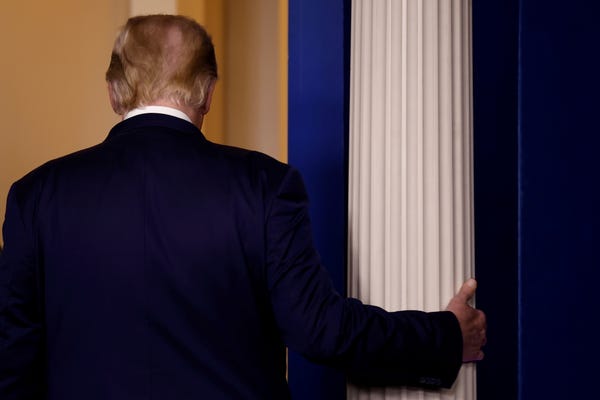 President Donald Trump told the country that the election was stolen from him during the address in early November, prompting ABC, CBS, and NBC to cut away from the speech to let people know that the information was false, Business Insider previously reported.