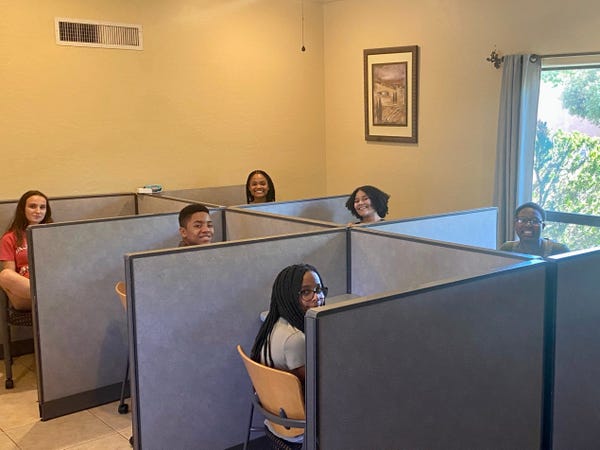 The 44-year-old mother said that the seven children, ranging in ages from 10 to 20, all have some element of virtual learning this fall, but what they didn't have were desks to study from in their home in Tempe, Arizona.

Initially, James said she thought working from the dining room, couches, and kitchen table would suffice, but she quickly learned that her children needed designated spaces to learn.

James called the first two weeks of school "a nightmare." She received emails and calls from teachers that her children weren't attending virtual classes, weren't on camera, and weren't engaged.

"I was over it, and I didn't have a ton of time to problem-solve," she told Insider.

So, James purchased six cubicles and office chairs for $600. The cubicles replaced the couches, which now sit vertically in the corner of the room. James said her children can still study from anywhere in the house, and there's often an empty desk for neighbors and friends to use since some of her children attend a mix of in-person and online classes.

Since James works as a nurse, she isn't home to monitor the children, so she said the cubicles provide a way for her children to help each other throughout the day and create a barrier between school and home.

Along with the cubicles, James purchased old-school lunch trays and milk cartons and has served her children lunch during their Zoom classes.

She also added a "student of the week" award to the makeshift classroom, but the prize never goes to a student. Instead, one of the family's three dogs earns the title each week.

Beyond the laughs, James said that the cubicles have made a huge difference.

For example, one of her daughters was failing every class, and since creating an organized learning space, James said she's brought her grades up to Bs.

"They've made a huge difference," she said. "They love it so much that they're trying to figure out a way to leave them up all year so they can study and do homework back there."

"Every day at work, I see the destruction that COVID has left in its path and heartache, and the trauma, not only to patients but the toll it takes on us healthcare workers and front line responders," she said. "And the last thing I want my kids to remember about this year is that."

James said she is hoping that these cubicles help make this experience a little less traumatic for her children. The cubicles offer "a sense of normalcy," structure, and create a landing spot for school work.

"It's taught them that adult life lesson that if you have a dedicated place to do work or study, you are so much more productive," she said.

If you're a teacher, student, or parent who wants to share their story on what it's like to go back to school right now, get in touch at [email protected].