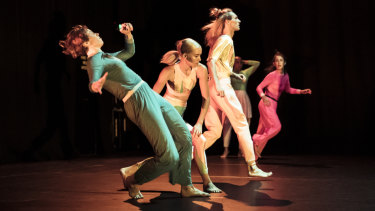 Dancers build a society in Make Your Own World.Credit:Pippa Samaya

Lucy Guerin’s new work opens with six dancers sitting on the floor to a whirring noise, their undulating movement something between grooming in the savannah and maintaining cruise control.

Even their costumes, deftly evoking both a rave and 1960s aviation professionals, announce a tension between the mechanical and the organic.

From here, the dancers gradually rise, finding verticality and lifting off the ground until they establish contact with one another.

Make Your Own World is about the formation of society, and what it takes to tame the primal forces in any one of us.

Guerin’s later choreographies have tended to be strongly determined by a single formal concept (pairing trained and untrained dancers in Untrained; repeatedly halving the space and duration of the performance in Split), which at times gave them a rigidity, like a long list to tick off.

Make Your Own World is looser and freer: improvised and choreographed sequences alternate (and at times commingle) to illustrate the tension between structured sociality and individual agency.

Social structures are built, but not without significant setbacks: segregation, tribalism, break-offs, elaborate social rituals that disintegrate. Sublimated violence appears in the usual trifecta of sport, spectacle and war.

Halfway through, the four female performers march diagonally across the stage on all fours beneath the men, standing tall, in a powerful commentary on gender oppression. It is a rare moment of clarity in a choreography that remains exceedingly abstract for its socially minded subject matter.

How does one examine basic social structures through dance without reference to folkloric vocabulary? But then, whose traditional dance could a predominantly white Australian dance company safely reference in 2019?

In the end, Make Your Own World wants to speak of primeval cultures, while referencing nothing older than some postmodern dance of the last 20 years. What it escapes in controversy, it also loses in substance.