Peter Zelewski is a London-based photographer who spent four years capturing photos of identical twins for a photo book about the siblings. 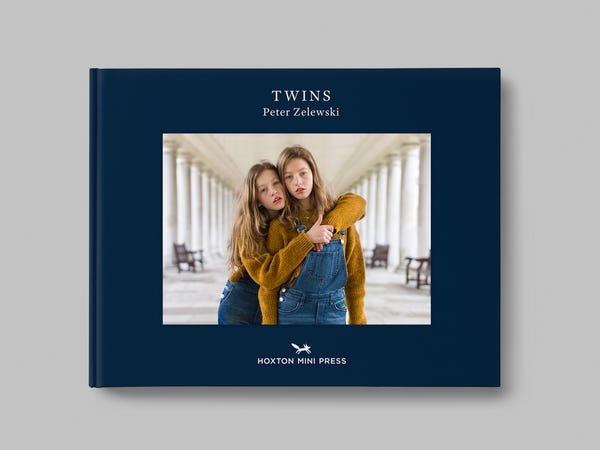 Zelewski told Insider that he's always been fascinated by identical twins and the unique bond they share. His first encounter with twins occurred while he was still in grade school, where he said he experienced a certain amount of jealousy when he witnessed the siblings' "seemingly invisible" bond.

"I distinctly remember a time in my grade school years when there were twin boys in my class and being amazed by how enigmatic they were," he said. "They spent all of their time together, dressing alike, talking alike, while the school authorities did their best to separate them whenever possible. This seemed to only make their bond stronger."

His initial interest in the series came from seeing other artists' portraits of twins. 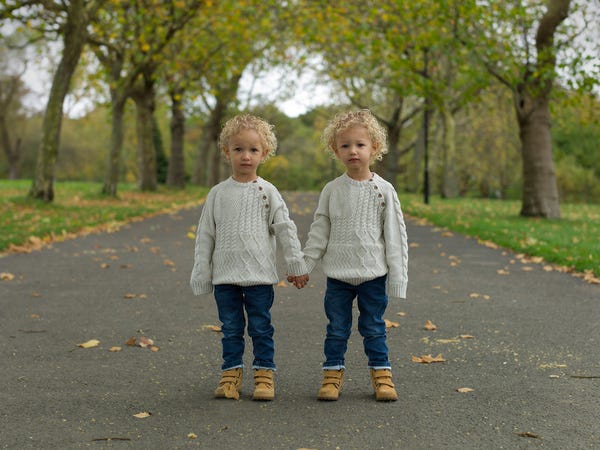 "My fascination surfaced with the discovery of photographer Diane Arbus and her famous portrait of twins Cathleen and Colleen Wade," he explained. "The image was strong, powerful, intriguing, and also somewhat disturbing; the portrait fascinated me."

From there, Zelewski decided to capture his own series of portraits.

"I loved the symmetry, the balance, the strength, and the overall harmony of the portraits I was making of twins, which probably has a lot to do with my own obsessive-compulsive tendencies," he added. "Once I started getting into the project, what struck me as being special about these [photo shoots] was the unspoken bond and closeness of the twins."

Zelewski's hope was to capture the unique relationship of the twins that he photographed. 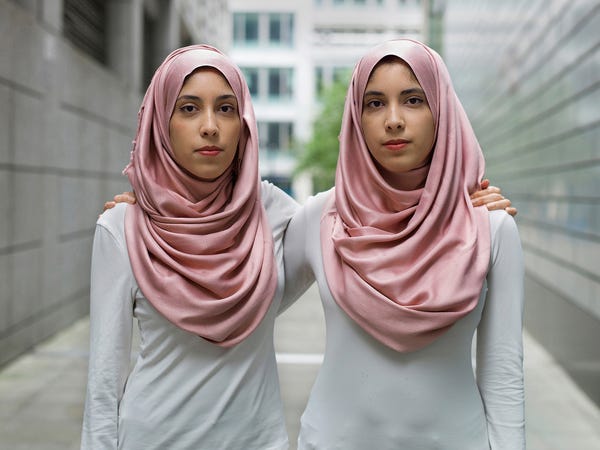 "Before I entered into this project, I was aware of the stories about the mythical bond between twins, but having met very few twins myself, it was something I hadn't experienced firsthand," Zelewski told Insider. "I continually found myself moved and inspired by the stories of the challenges and joys they have experienced. I felt as though I was being let into an elite club, and felt lucky to be invited in."

Each photo in the book is accompanied by a quote from the photographed twins about their relationship with one another.

Underneath the photo of Sharmeena and Ridhwana (pictured above), a quote says: "Both Sharmeena and I have moved around so much in our lives — we have never really lived in a place we could call home. Making friends has been hard but we've always had each other."

Zelewski said he met some amazing sets of twins throughout the duration of his project, but there are some siblings whose stories he found to be very inspiring. 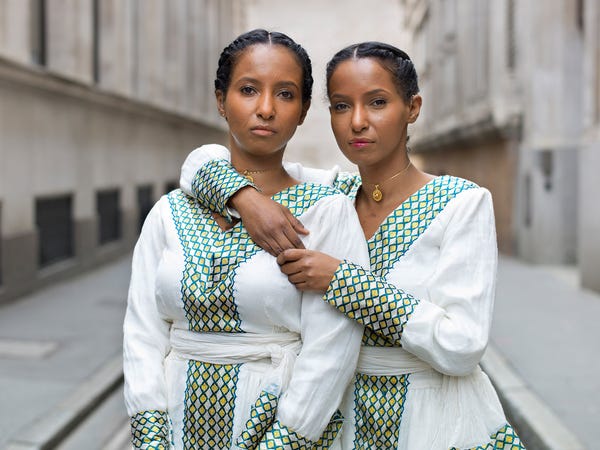 The photographer said that his photo shoot with Eritrean twin sisters Hermon and Heroda (pictured in the above photo) was very special to him.

"Hermon and Heroda were striking and very unique in appearance, and I knew straight away they would be perfect for my twins project," he said. "I noticed there was something unusual about the twins which I hadn't planned for — they were both deaf. During our photo shoot, we struggled with our communication, but the determination from the twins to make their voices heard was astonishing."

"In the end, I feel I produced a portrait of the girls, which not only shows the strong bond between the two but also the strength they both have that enables them to succeed regardless of their disability," he added.

Zelewski said his subjects were happy to share their most intimate moments with him. 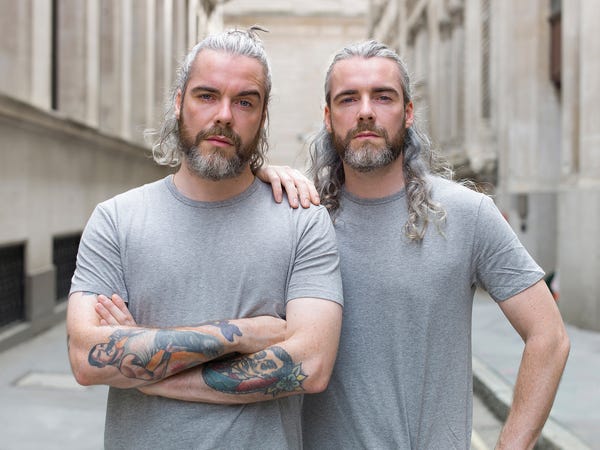 Zelewski told Insider that most of the twins he photographed were excited to share anecdotes about their lives, as well as be a part of the project.

To find his subjects, the photographer said he approached sets of twins on the streets and simply asked if he could take their portraits.

"As my series of twins portraits developed, and as the project grew in size, the word about my photography spread and I was lucky enough to be contacted almost daily by young twins, mature twins, and twins of every nationality who were very excited to be part of the project," Zelewski said.

The photographer told Insider he was surprised to learn about both the physical and mental similarities, as well as the differences, between each twin. 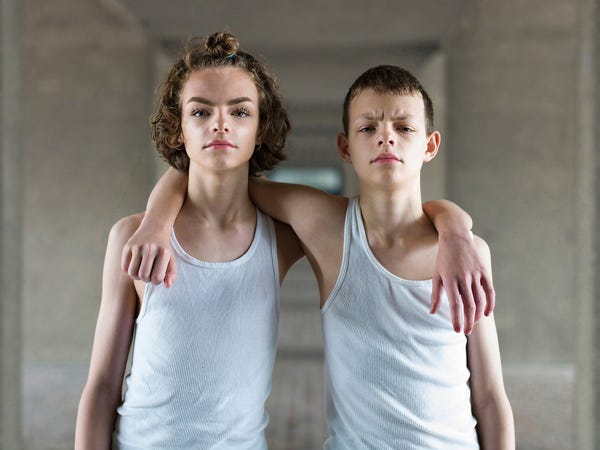 While physical similarities between the twins were something that Zelewski initially set out to capture, he later began taking note of their differences.

Specifically, the photographer said he was most surprised when he photographed 15-year-old twins Joe and Duke and found their differences to be just as captivating as their similarities.

"Although they are identical twins, they couldn't be more different, both in their physical appearance and personalities. I found this very challenging when taking their portrait," he told Insider. "After much thought, I decided that instead of trying to photograph the twins looking as identical as possible, I would embrace their differences and photograph them for who they were as individuals."

During his time photographing the sets of twins, Zelewski started to learn each sibling's personality. 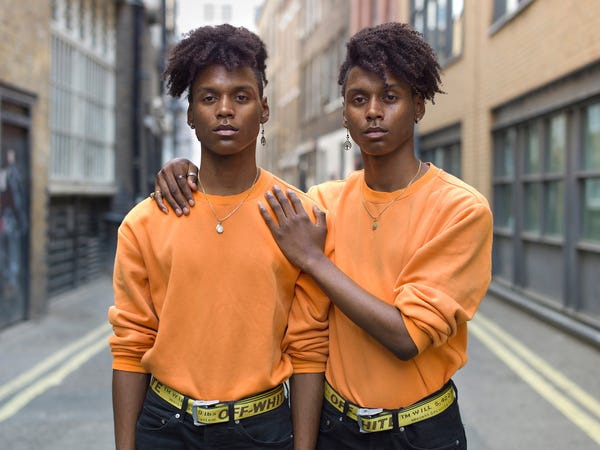 Since all of the twins in the series were dressed the same, Zelewski said he often relied on their personalities to help him differentiate between the two.

"I always found it very difficult, sometimes impossible, to differentiate between the twins when initially meeting them," he explained. "But as soon as we started talking and getting to know each other, I could immediately start to pick up on the different personality traits."

"In most cases, one of the twins was almost always more dominant and more in control than the other," he said.

Photographing twins allowed Zelewski to experience "what it's like to have such a strong and special relationship" with a sibling. 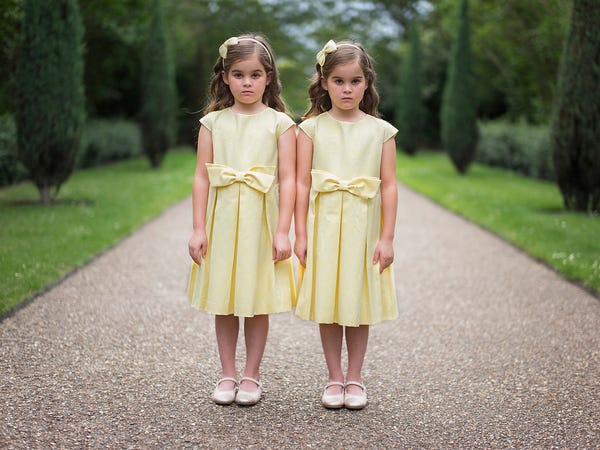 Through capturing the photos, the photographer said he noticed a special bond between twins that wasn't present in his own relationship with his "non-twin" older brother.

"Even with the project now complete, I am only just now able to comprehend how special and unique the twins' relationships are," Zelewski told Insider.

He also said that he was continuously inspired by the stories he heard during his photo shoots. 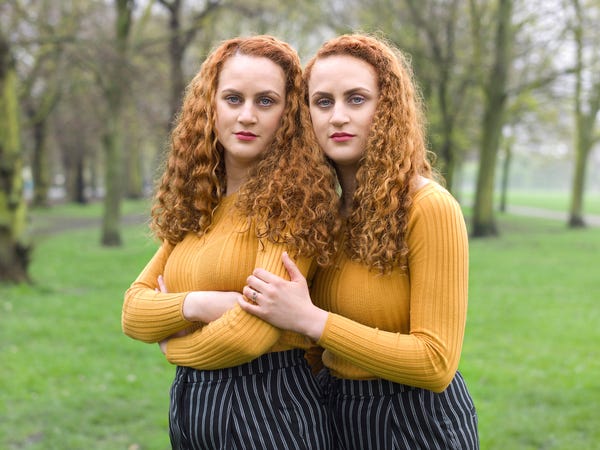 "I saw many examples of the telepathic link from twins who communicated through their own language, felt each other's pain, and who found it impossible to get through the day without talking to one another," he said.

The caption that's included with Naomi and Alexandria's photo (pictured above) said: "Growing up, we felt being a twin was a curse. People referred to us as 'the twins' and we struggled to develop individual identities. We tried hard to be different from each other, choosing certain colors that the other was banned from wearing. Now, being a twin is a huge part of who we are. We live apart and have our own lives but we still do most things together and talk every day."

Zelewski ultimately hopes that people who read his book "Twins" will be inspired by their extraordinary relationships. 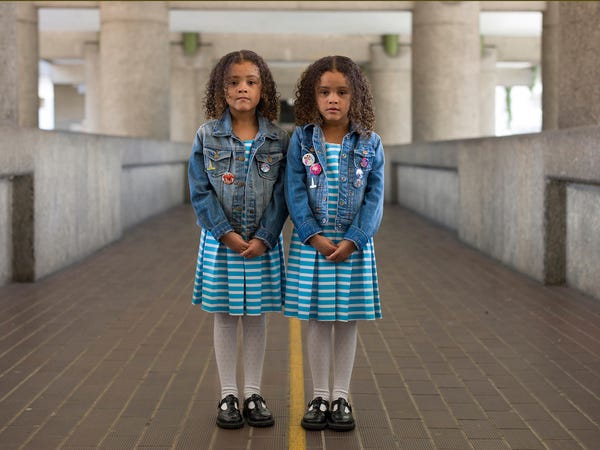 "I really do hope that anyone who looks at these images can feel a fraction of what I felt when I made these special portraits," Zelewski said. "Of course, very few of us will ever be able to experience the twin bond fully. But hopefully, by trying to see things through my lens, we can learn to value our own partnerships just a little bit more."

You can see more of Zelewski's work on his Instagram, and view the entire "Twins" collection by purchasing the book from his website.