An additional healthcare provider will be brought in to assist with the aged care vaccine rollout after it was revealed an 88-year-old man and 94-year-old woman were administered at least double doses of the Pfizer COVID-19 vaccine by a doctor who had not completed the compulsory online training.

Professor Michael Kidd’s investigation found the doctors administered four times the prescribed dose, and the doctor was not trained. 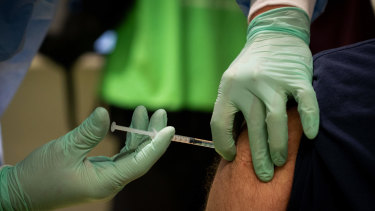 Both patients who received more than the recommended dose of the coronavirus vaccine have reported no adverse effects, Health Minister Greg Hunt says.Credit:Bloomberg

“The doctor concerned made a serious mistake,” Professor Kidd said.

Both patients, who were admitted to hospital on Wednesday, were well and neither were suffering adverse effects, Health Minister Greg Hunt said.

“The company has had the book thrown at it,” Mr Hunt said at a press conference.

The woman will return to the facility today.

Healthcare Australia, which employed the doctor, could stand to lose its contract if further issues occur and the Department of Health is double-checking whether all contracted healthcare workers have completed the vaccine training.

The department has also referred the doctor involved to the medical regulator.

So far more than 4000 residents have been vaccinated.

Seventeen facilities received vaccines on Wednesday, and a further 20 were expected to get vaccines on Thursday. Across the country more than 17,500 people have had their first dose of the Pfizer vaccine.