Make-up artist who feared her severe acne will drive away her boyfriend reveals how her skin improved in just six WEEKS with an over-the-counter serum – and it costs just £12.95

A make-up artist with severe acne has revealed how her skin has dramatically improved in just six weeks with the help of an over-the-counter serum.

Abbie Bull, 22, of Donnington, Shropshire, has suffered with severe acne for over seven years and at her lowest, she felt so ugly, she worried her boyfriend of five years would leave her.

‘He is very understanding of my insecurities regarding my skin but there were times when I would go to bed with makeup on because I couldn’t bear the thought of him looking at my spots,’ she explained. ‘I sometimes worry that he’ll leave me because of my skin, even after all this time.’

After having no success with prescribed medication, Abbie found an unlikely solution for her acne in the form of a £12.95 serum. 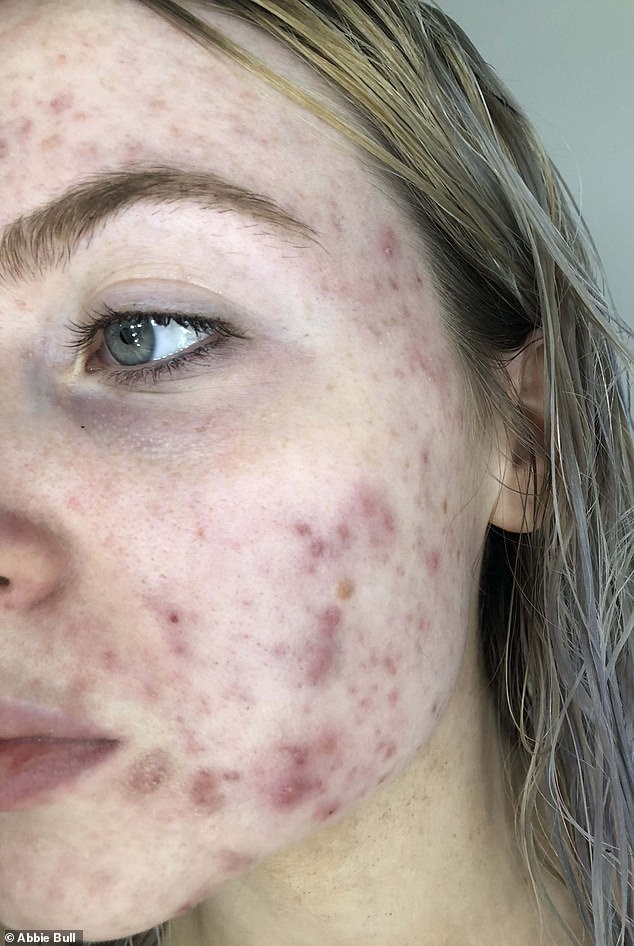 Abbie Bull, 22, from Donnington in Telford suffered with severe acne for over seven years and said she felt ‘so ugly’, she worried her boyfriend of five years would leave her. This picture was taken six months before Abbie started using the serum 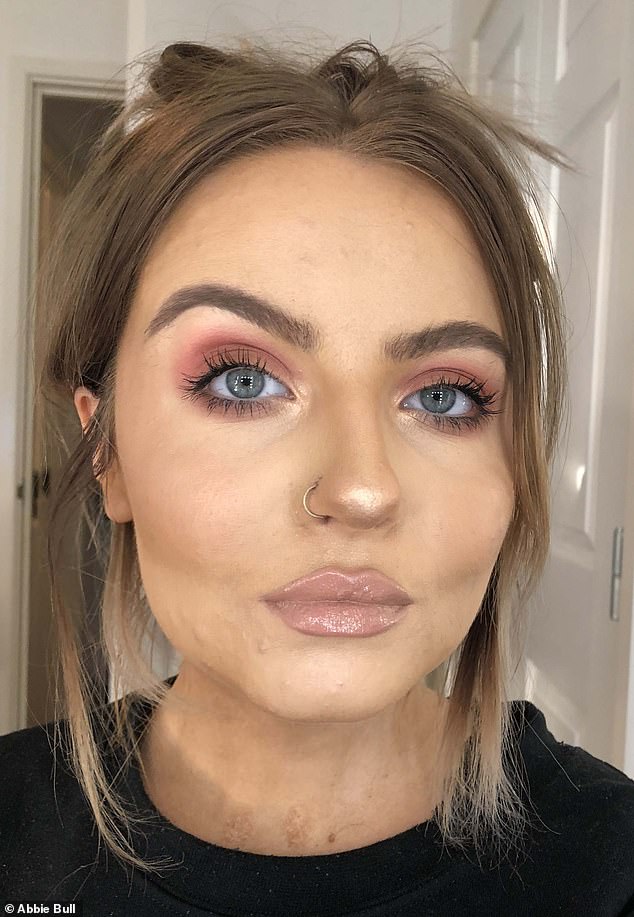 The make up artist has been using a £12.95 serum for just six weeks and has seen dramatic improvements in both her skin and confidence. Above, Abbie’s most recent picture after using the serum for six weeks

Abbie has been using the product for just six weeks but has already seen a significant improvement.

Speaking of her experience of growing up with severe acne, Abbie said: ‘I first developed acne when I was 15, which was seven years ago.

‘At first it wasn’t so bad, I could deal with it and assumed it would go away once I’d reached adulthood like everyone else’s acne did.’

But as Abbie entered her twenties, her acne worsened and she became increasingly self-conscious of her appearance. 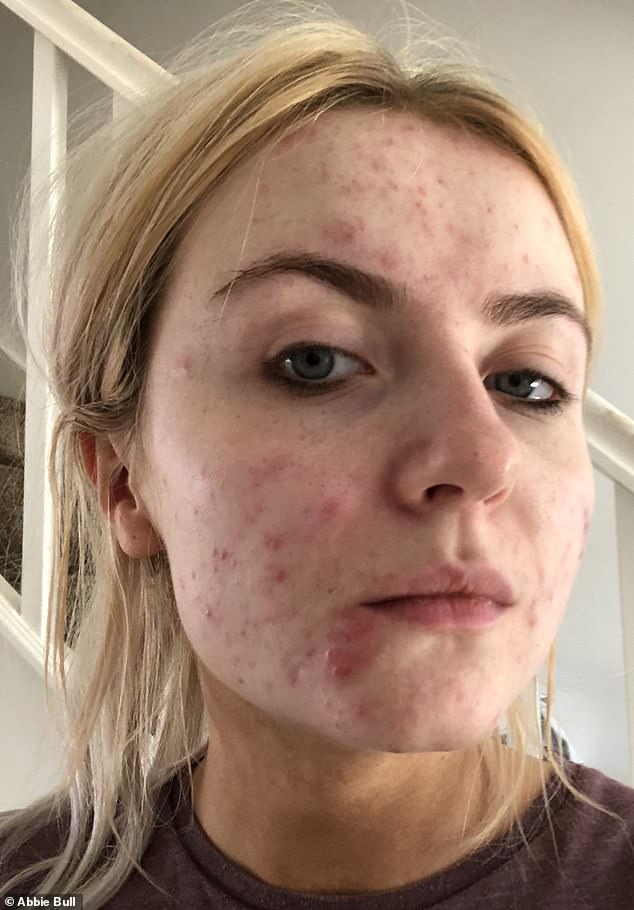 Abbie had acne from the age of 15 and assumed her acne would go away like everyone elses, but instead it got progressively worse. Pictured six months before discovering the serum 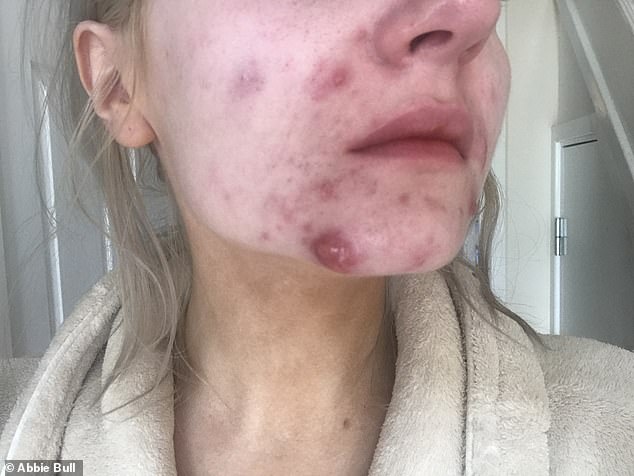 Abbie’s acne worsened as she entered her twenties. She said she went from ‘not really being too bothered’ by her acne to it making her ‘feel super insecure, anxious and very depressed’. Pictured, Abbie’s skin during an acne flare-up before using the serum

‘I went from not really being too bothered by my acne to it making me feel super insecure, anxious and very depressed,’ explained Abbie.

‘Not only did it erode my confidence and make me feel ugly, it was also really painful. I was aware of my skin all the time and I felt embarrassed when people looked at me.’

She continued: ‘Like most people in my position, I’ve tried all sorts of prescribed topical treatments from my doctor and antibiotics but nothing cleared my acne.

‘The topical treatments made my skin burn and made the underlying skin become very red and sore.’

Abbie repeatedly went back to the doctors to report what was happening with her skin, but she wasn’t taken seriously. 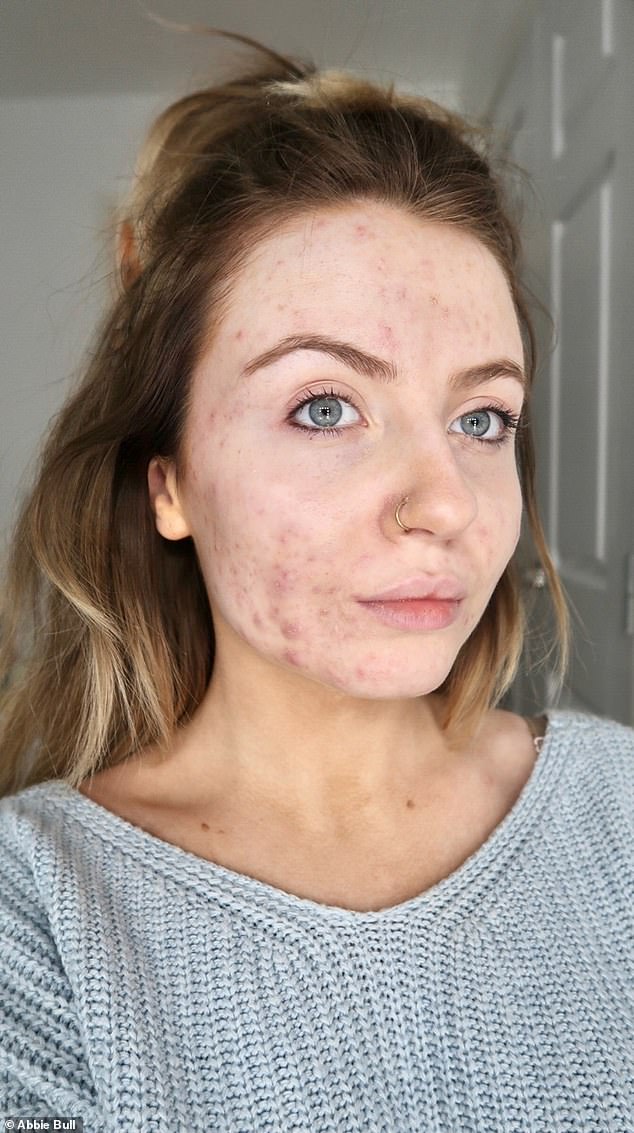 Abbie is pleased with the progress so far and started seeing improvements in just two weeks of using the product. Above, pictured after using the serum for just two weeks 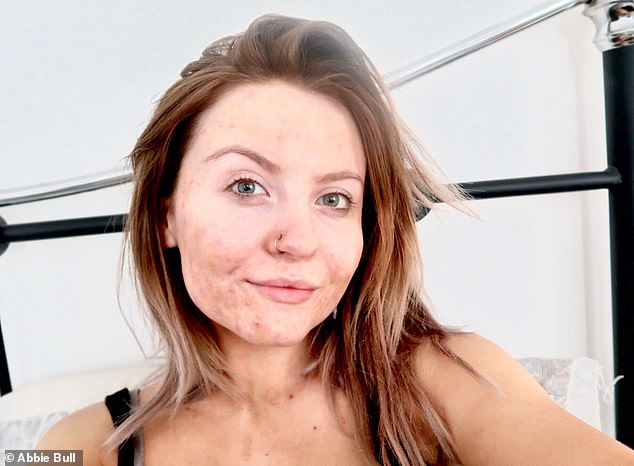 The 22-year-old started documenting her acne journey to help face her insecurities. She was keep to get her battle out in the open to help others. Above, pictured after using the serum for five weeks

‘I was largely ignored,’ she said. ‘I was fobbed off and they kept putting me on different creams and tablets even though it was clear from the state of my skin that nothing they were prescribing for me was working.’

‘Eventually I was encouraged to take the birth control pill which ultimately made my already depressed state of mind even worse. Within months of being on it I felt completely helpless and hopeless.’

She added: ‘During periods of depression about my skin I would pick at my face and look in the mirror for hours and cry.’

Speaking of one of the lowest points in her acne journey, Abbie described the moment she went to work one day without make up for the first time: ‘My skin was too sore and swollen to apply it,’ she said.

‘A customer I was serving looked in disgust and said I needed to eat more fruit and veg and drink water. I was so upset by what she said to me I had to leave the shop floor. I never went to work without makeup again after that.’

Abbie recently applied for a job and got an interview with Clarins, but her skin had a flare-up and on the day of the interview, she didn’t go.

‘I convinced myself they wouldn’t employ anyone with skin as bad as mine,’ she explained. ‘Like many people in my position, the final answer was being prescribed Accutane. 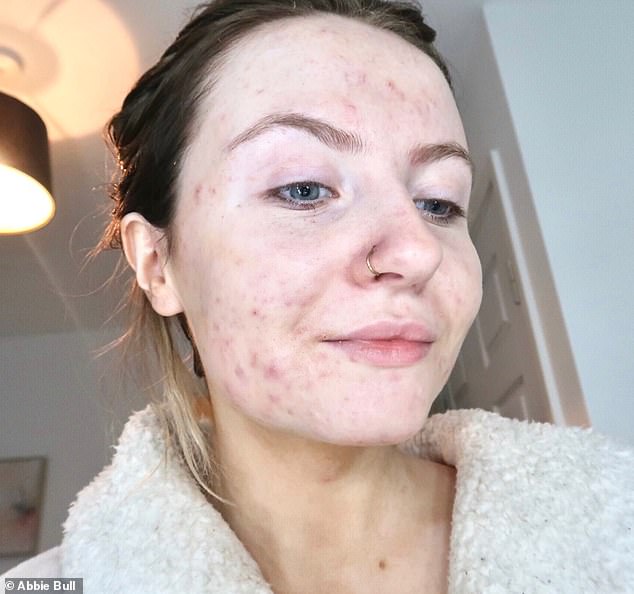 Before, Abbie was so aware of her skin she would use scarves to try and cover it up. Now, she’s said her skin is ‘feeling like it’s actually healing from the underneath.’ Her skin has seen dramatic improvements after just a few weeks of application (above)

‘However, due to my already anxious state of mind, bouts of depression and panic attacks caused by the state of my skin, I decided I needed try other routes first as I had read about the side effects of this drug.

‘I was really scared that it would affect my mood in an even more negative way.’

In a bid to try and face her insecurities about her acne and to get it out in the open, she started documenting her story on Instagram.

‘It was through this and sharing my story with other acne sufferers that I was recommended to try Clarol Skin Flora Re Balancing Serum,’ said Abbie.

‘After asking for more information and doing some research into it I found that a lot of people with acne as bad as mine had had great success with it after coming off Accutane.’ 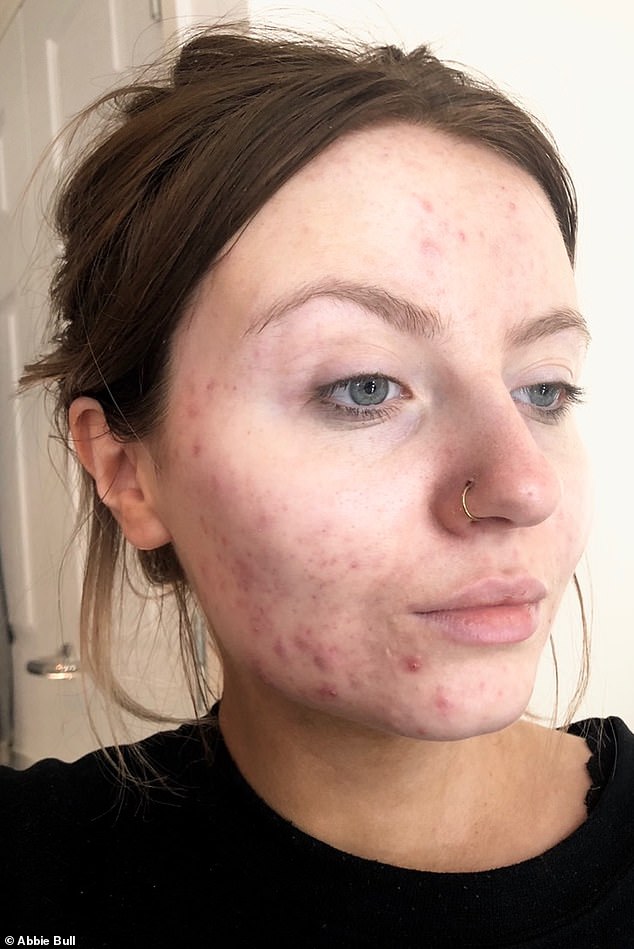 While Abbie said her acne has by no means gone she is ‘seeing  gradual reduction in large cysts and a much smoother skin texture.’ Pictured after just weeks of applying the serum to her acne

Now, Abbie has been using the serum for just six weeks and saw results within the first two.

‘At first my skin got worse as more spots appeared, but I had been warned this may happen, so I tried to stay patient,’ she explained.

‘After the first two weeks the big deep cysts underneath my skin weren’t as large and my overall texture was smoothing out.

‘After about three weeks of use I found my skin calming down, it was much less red and sore and the spaces between the spots were growing, while the deep cysts were less painful and swollen.’

Abbie has now described her skin as ‘feeling like it’s actually healing from the underneath.’

She added: ‘My acne has by no means gone and I still get bad days, but the serum has helped calm down the redness and swelling and I’m seeing a gradual reduction in large cysts and a much smoother skin texture for me to apply makeup to.

‘It’s given me some hope, which it exactly what I need right now when I look back at what I have been through.’