Much was sung but little was said during Adele One Night Only, the two-hour TV special featuring a private concert by the British singer – recorded at the Griffith Observatory in Los Angeles last month – and a separately shot interview with Oprah.

The performance opened with Hello, of course, and took place in front of a small audience of A-listers including Melissa McCarthy, Ellen DeGeneres, Tyler Perry, James Corden, Gabrielle Union, Gordon Ramsey, Dwyane Wade and Lizzo. Looking sleek in a black mermaid ballgown and elegant up-do, Adele sang from atop the front steps of the observatory as the sun set, the Hollywood sign and the lights of the city accentuating the glamour of the moment and the down-to-earth appeal of her music. 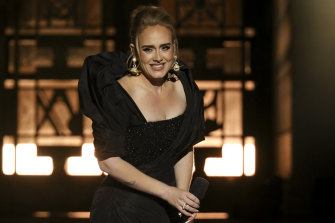 Adele during her performance at the Griffith Observatory in Los Angeles.Credit:Cliff Lipson/CBS

The pre-taped concert special was interspersed with the singer’s first television interview promoting her fourth album, 30, which arrives on Friday. Anticipation for the special was palpable: the 33-year-old, one of the world’s bestselling artists, has been on a six-year hiatus – in which time she raised a son, married and divorced, and lost 45 kilos. In short, plenty of fresh material for a new album full of big feelings, much of which she sang during the concert special.

As Adele has made clear over the years, it’s the music where she’s most expressive, which was certainly borne out during the special by her uneventful and distinctly non-revealing interview with Oprah, which only succeeded in interrupting the momentum of the performance. The host, who triumphed this year with a blockbuster interview with Prince Harry and Meghan Markle, tried to find the complicated woman behind the emotive lyrics by asking – in about 100 different ways – how Adele writes such moving songs. But the artist remained hidden behind the tough, no-frills shell she’s long maintained, even after graduating with age to the crisp white suit and secret-garden setting.

Adele may not believe she’s all that deep “in real life,” but her reticence didn’t stop Oprah from trying to find the human embodiment of First Love or When We Were Young in the woman sitting across from her.

Is this the divorce album? “I spent a lot of time sitting in my own feelings,” said Adele, who went on to talk in broad strokes about her two-year marriage and subsequent divorce to Simon Konecki, the father of her 9-year-old son, Angelo.

What about the dark lyrics on her new track, Hold On – was that inspired by the pain of the split? “It’s a process. The process of a divorce, the process of being a single parent, the process of not seeing your child every single day wasn’t really a plan that I had when I became a mum.”

The weight loss? Not that big of a deal. She wasn’t trying to lose weight, she was just trying to get her life on track; she said she stopped drinking and started working out a lot.

The public reception to her new shape – the people who are criticising her for losing weight? She’s always been OK with her body. And she isn’t trying to shame anyone: “I’m just trying to sort me own life out.”

In case you’re wondering what Adele eats, she likes Chinese, she had McDonald’s the night before the interview and she doesn’t have much of a sweet tooth. But otherwise, any time things threatened to get too intimate, the concert broke into the interview – even though, admittedly, there wasn’t much of a mood to shatter. 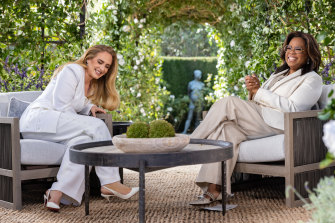 The British was charming as ever in her interview with Oprah, but didn’t reveal much. Credit:Joe Pugliese/CBS

Adele sang numbers like her new single Easy on Me and her Bond theme Skyfall with characteristic precision, her Saturn-shaped earrings catching the light as the set lit up around her. Even the high-strung Gordon Ramsey looked downright chill under her spell. Too bad viewers didn’t enjoy the same experience, tossed anything but smoothly between the show and the sit-down interview.

At least the concert provided a little more drama. Adele helped a fan plan a surprise marriage proposal to his girlfriend. He brought her to the observatory blindfolded, unmasked her, then popped the question in front of the celebrity crowd and the singer. (Lucky for him, and Adele, she said yes.)

The most transparent and vulnerable Adele appeared during the two-hour special was not during the interview but onstage, when she spoke directly to her son. “This is the first time that my son has ever seen me perform,” Adele said, tearing up. “It’s the absolute honour of my life, baby, to have you here tonight.”

Before closing with new song Love Is a Game, the show climaxed with the singalong hit Rolling in the Deep, bringing the audience to their feet, and putting Adele back in the spotlight for what she does best – her music.

Adele One Night Only premieres 7pm Sunday on Channel 7 and 7plus.