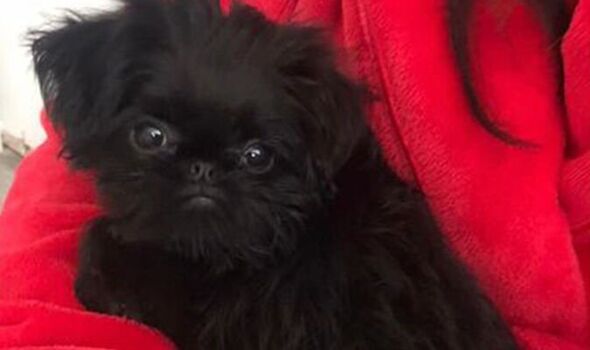 Lesley McGowan had been walking dogs Jolene and Jasper at around 10pm on Saturday, March 26, in Dovecot, a suburb of Liverpool, when the horror attack is said to have occurred. She said the other dog was not on a lead and “bit [Jolene’s] jaw completely off” such that “her face was gone”.

The worried owner rushed the 11-month-old Griffon Bruxellois to the vets, who were able to operate on her, but she sadly died the following day.

Ms McGowan is now calling for owners of large dogs to make sure they are kept on a lead to avoid these sorts of attacks. She also contacted the police over the incident.

A spokesperson for Merseyside Police confirmed to local press that an investigation was now underway.

Giving her account to the Liverpool Echo, Ms McGowan said that “as soon as we walked through the gate [to Dovecot Park] I saw this dog charging towards me out of nowhere.

“I couldn’t see the lad at first, because the dog was further up and off his lead, but I screamed to him ‘get your dog, get your dog’.

“Then he came running over, I had to let my other dog Jasper go, because Jolene had run around my ankles a couple of times and tangled me up in the lead – she was wanting me to save her.”

She continued to explain that she had let her other dog, Jasper, go after falling to her knees tied up in the lead.

Ms McGowan said the man came over “because the dog had grabbed Jolene by the face and it had her by the snout”.

“I was shouting ‘get it off, it’s killing her’ and he was saying ‘no it’s not’. Then he started trying to get his dog off.”

With its jaws locked around Jolene’s head, Ms McGowan said she then had to put her hands in the attacking dog’s mouth to try and prize it open and rescue her puppy.

She added: “My dog was screaming like anything and I thought she’d died, but she just fainted. I still had hold of her, but I was still tangled in the lead, so I was trying to pull her out of its mouth.

“She had a broken leg and her face was gone, and had a broken jaw. It bit right through Jolene and bit her jaw completely off and that’s how she ended up getting free.”

Ms McGowan said she then ran back home with Jolene in her arms. Only on the journey to the vets did the dog come round.

She said the vet sedated her, before ringing Ms McGowan the following day to say that Jolene had survived the operation, but that her heartbeat had decreased rapidly and she had died that morning.

Ms McGowan commented: “I had to break it to the kids that she died and they were devastated.”

Ms McGowan told the Echo that the vet said they had seen three dogs with injuries from an attack in a 12-hour period.

She now wants to make sure what is alleged to have happened to Jolene does not happen to another dog.

Ms McGowan said: “His dog wasn’t on a lead. My dog was on her lead and she didn’t have a chance.”

She added: “People need to have their dogs on a lead and have some thought for others.

“There are kids playing there and dogs like my little one – they stand no chance with these bigger dogs, especially if they’re off the lead.”

Ms McGowan told police that the dog that had attacked Jolene looked like a Staffordshire Bull Terrier or an extra-large American Pitbull. She described it as “huge” and said it “looked like it was on steroids”.

A spokesperson for Merseyside Police said that an investigation into the incident was underway.

They said the owner of what was then believed to be a Staffordshire Bull Terrier left the park, near Knotty Ash, after the alleged encounter.

Officers are currently carrying out witness enquiries in the area and an investigation is underway.