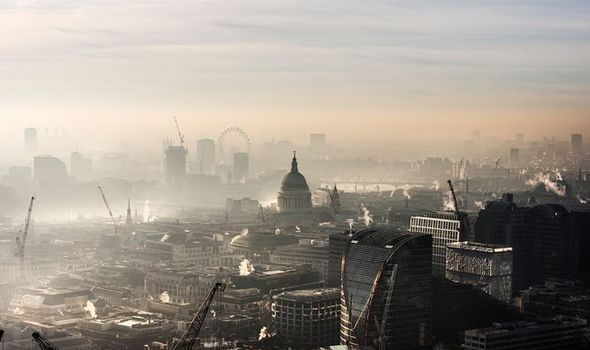 The World Health Organisation’s first review in 16 years recommends cutting the old “safe air quality guidelines” for tiny particulates in the air by up to 50 percent and for nitrogen dioxide by 75 percent. It said: “Since WHO’s last 2005 global update, there has been a marked increase of evidence that shows how air pollution affects health. WHO has adjusted almost all air quality guidelines downwards.

“Exceeding the new guideline levels is associated with significant risks to health.”

WHO recommends cutting the annual limit for PM2.5 — the tiniest particles — from 10 to five micrograms per cubic metre and for nitrogen dioxide from 40 to 10mcg per cubic metre.

Rosamund Kissi-Debrah, whose daughter Ella became the first person in the world to have air pollution listed as one of the causes on her death certificate, urged ministers to adopt the new lover who limits.

Rosamund said: “The new guidelines mean that the old ones from 2005 are not working. Millions are continuing to die around the world.

“The UK is a world leader. The Prime Minister is going around telling other countries they are not doing enough. Why don’t we show the world that we truly mean businesses and adopt the guidelines?”

Ella, who lived near the busy South Circular Road in Catford, south London, developed a rare form of asthma that killed her when she was aged nine in 2013.

Lawyers for the eco-charity Client Earth say UK limits for the smallest particulates and nitrogen dioxide — both largely produced by traffic — are four times higher than the new WHO guidelines.

“Air pollution, even at levels lower than previously thought, seriously endangers people’s health and action needs to be taken.”

The Department for Environment said it would consider the guidelines. A spokesman said: “Air pollution has reduced significantly since 2010.

“To continue to drive forward improvements we will set ambitious targets through our Environment Bill.”

A public consultation on the proposed targets is due early next year.