In ‘My Name’s Yours, What’s Alaska?’, the drag superstar reflects on how she turned ‘being queer and femme’ into her greatest strength and how to find positivity in all those awkward mistakes in life.

The first major moment of failure – like, fall-on-your-face, eat-s-it, crawl-in-a-hole-and-die-humiliated-level of failure – in My Name’s Yours, What’s Alaska? comes shortly into Alaska Thunderf-ck 5000‘s memoir. After sharing some early transformative events in her life – the first time wearing a black plastic dress, a motif that would become her signature later on; the religious experience of seeing Tr*nnyshack; trading Pittsburgh for L.A – Alaska recounts crashing and burning during a Stevie Nicks-themed performance at drag event, Sh-ts & Giggles.

“[And] our track started. Or at least I think it started. Had it started? I could just barely make out the driving bass line at the beginning of ‘Edge of Seventeen,’ but I couldn’t tell how far into the song it was or when we were supposed to come in.” Sound issues and a mortifying wardrobe-malfunction followed, resulting in a “cursed performance” that Alaska summed up as simply a “disaster.” As impactful as this indignity was – enough to warrant inclusion in the international drag star’s memoir – the RuPaul’s Drag Race All-Stars winner says there is no residual trauma. At least, she can still listen to Nicks’ 1982 single without immediately thinking of that gig. “No, I don’t think God – thank god,” Alaska tells HollywoodLife while chatting about her book.

“I banished it to the corners of my mind,” she said. “But you know, what? I ran into the promoter of Sh-ts & Giggles recently, and he’s lovely. We got to catch up a little. And he still wants to work with me, so it can’t have been that bad of a performance.” Clearly, it wasn’t because, at the end of the page, she’s speaking with a casting agent who thought Alaska would be perfect for a new show featuring RuPaul.

“It was embarrassing in the moment,” says Alaska, “but it also opened the door of me being a part of Drag Race. That’s usually how it works out. It’s like, if you do a gig or a show or something, and it’s fucking horrible, usually, something good comes out of it that you weren’t expecting. I’ve always found that. So that was definitely one of those moments.” 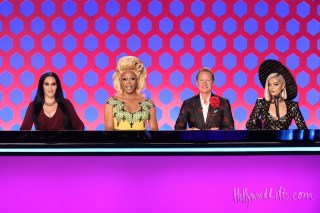 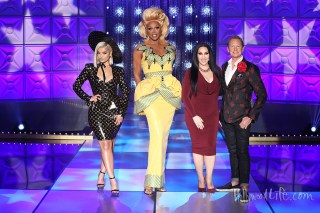 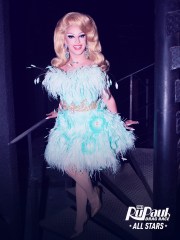 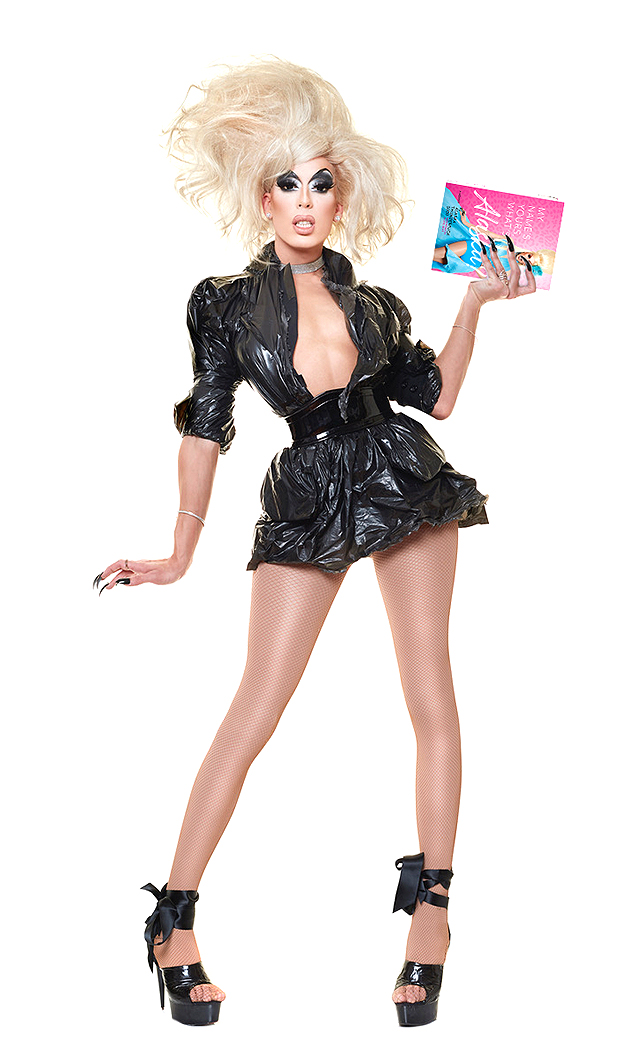 My Name’s Yours, What’s Alaska (out from Chronicle Books on Nov.9 ) is full of those moments, showing that tragedy and opportunity are often two sides of the same coin in Alaska’s pocket. A transcendental experience at Burning Man is one breath away from her being unemployed in a cockroach-filled apartment in L.A. Returning home to Pittsburgh leads her to discover the Blue Moon Bar and a revitalized love of drag. There are the ups and downs of her relationship with Sharon Needles — including the pain of Sharon getting accepted on Drag Race, even though Alaska auditioned three times before she did – that add depth and definition. Alaska’s joys often have a twinge of sadness, and her lows are never fatal.

My Name’s Yours is undeniably Alaska. It’s a captivating read that feels as enjoyable and energetic as one of Alaska’s shows. Fans familiar with her will hear her in every word on the page. Those who haven’t had the joy of watching her perform on stage or screen will find a charismatic storyteller regaling you with how she wound up in this place. “I think that [My Name’s Yours] will give a more complete completely rounded picture of where I come from and how I look at drag and how I looked at the world,” she says. “Yeah, and it’s just fun to read and look at.”

The fun is frequently punctuated with moments of seriousness. My Name’s Yours doesn’t fixate on the traumas that have become synonymous with the queer experience in America, but Alaska doesn’t shy away from them when they’re pivotal to her story. One such instance involved an attack on her while out with her friends and fellow drag queens, Cherri Baum and Veruca la’Piranha. A group of men assaulted Veruca, and the attack prompted an anti-queer violence rally that drew the attention of Pittsburgh’s news media.

Alaska’s time in Pittsburgh performing at the Blue Moon Bar informed not just her activism but also her drag. In one chapter, Veruca tells Alaska that with drag, you can “literally whatever the f-ck you want,” a message that she tells HollywoodLife is something “we all need reminding of, sometimes.

“That’s the reason why I like drag,” she says, “because it can be whatever you want it to be. There isn’t a set blueprint, and there aren’t strict rules. And as soon as strict rules start to form around it, then drag breaks them and denies them and moves around. And that’s why it’s special. So yeah, definitely. Veruca was right.” 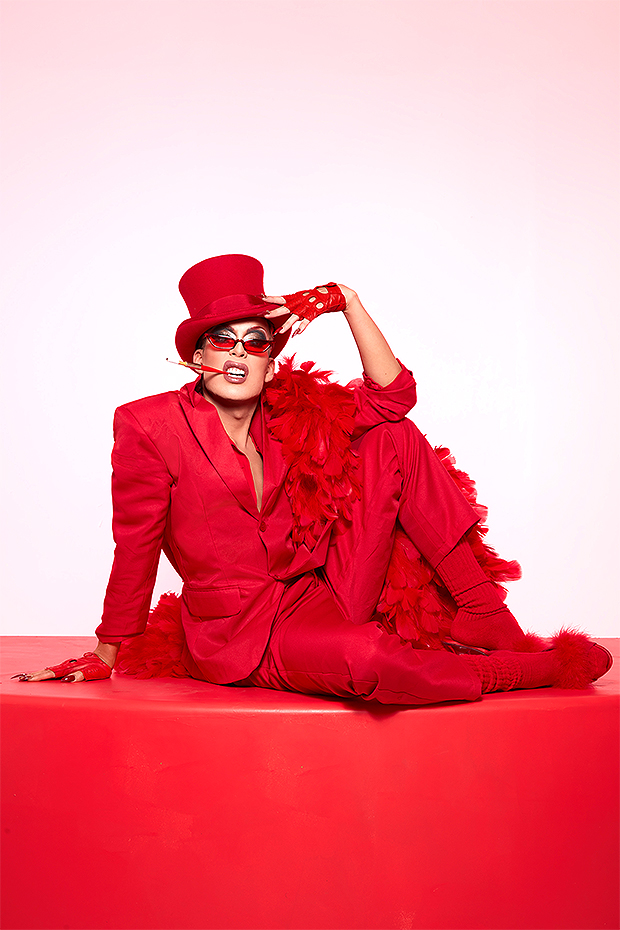 While at the Blue Moon, Alaska began her now-famous relationship with Sharon. My Name’s Yours shows the relationship in a light that isn’t always flattering, but Alaska says that there was no hesitation to including their high-profile romance in the book. “Because, you tell my story, especially as far as drag and Drag Race goes, Sharon’s a huge part of that journey,” she says, “and a huge part of my life. So no, I didn’t. I didn’t hesitate at all. And yeah, if we can shed more light on our origins, then, why not?”

Had Sharon read the book at the time of our interview? “I don’t think so. I sent it to her. But that’s asking a lot to get her to read a whole book. I don’t think so,” Alaska says with a smile. If and when she does, Sharon’s feathers shouldn’t be ruffled. “I hope not,” she says.” I mean, she was part of the process, and everyone who’s in the book was part of the process. We had to talk to everybody because my memory is full of holes. So we had to fill in the holes with everybody that was there.”

My Name’s Yours also covers Alaska’s venture into art beyond drag, specifically her music. The memoir documents the creation of her albums Anus, Poundcake, and Vagina, as well as Amethyst Journey, her folk-inspired collaborative album with Jeremy Mikush. In 2022, Alaska will release Red 4 Filth and embark on her first-ever headlining music tour. She’s already given previews of the project, with songs “Red,” “beautiful (night 4 a) breakdown,” and the recently released emo/pop-punk-powered “wow.”

Red 4 Filth is, as Alaska puts it, like “time traveling to the 90s and early 2000s. The sounds are completely referencing that time period.” The early tastes have shown that Alaska wasn’t afraid of pushing herself on the project, and Red 4 Filth seems to be her best music yet. “

“We didn’t want to leave any genre of that time range unturned,” she says. It’s  why the surging club power of “Red” is matched by the garage rocking punk attitude of “wow.” Alaska says the new album is “a pastiche of all these memories of that time. And that time in my life was when I fell in love with music.”

“I had a No Doubt CD and a Toni Braxton CD and an Ace of Base tape. And, and Britney Spears was a poster on my brother’s wall,” she says. “And all of these sounds are part of my soul. I love the music, and vocally it’s really, really fun and challenging.” Subject-wise, Red 4 Filth will see Alaska sing about “love and stuff,” she says. “Which is not really a place I’ve ever gone that much before.”

The two projects are oddly opposite: My Name’s Yours details Alaska’s past, while Red 4 Filth, even with the 90s/00s-vibe, illuminates Alaska’s future. Yet, they’re connected, thanks to Alaska’s dynamic personality and creative vision. Not to mention, a healthy dose of ‘don’t give a f-ck’ attitude.

One of the recurring messages of My Name’s Yours gets summarized at the end of the book. “We can take those things that we hate about ourselves, or that make us feel shame, and make them into our greatest strengths,” writes Alaska. Similarly, she says that one’s mistakes can be the greatest life lesson (“When you fuck up, own it and learn from it”). When pressed for her own “greatest strength,” Alaska doesn’t really have to ponder too hard. “It’s drag,” she says. “It’s coming from a place, of a society, that tells you that being queer and being femme is not allowed.”

After growing up with that message, Alaska’s greatest triumph, as she puts it, is to take being queer and being femme, and “make it the thing that becomes the central focus and vocation of your life, like that — that and it’s been my greatest gift in this world. So that’s like everything. It’s like drag, and I’m so glad. I’m so glad that that happened. And I’m so glad drag is part of my life.” 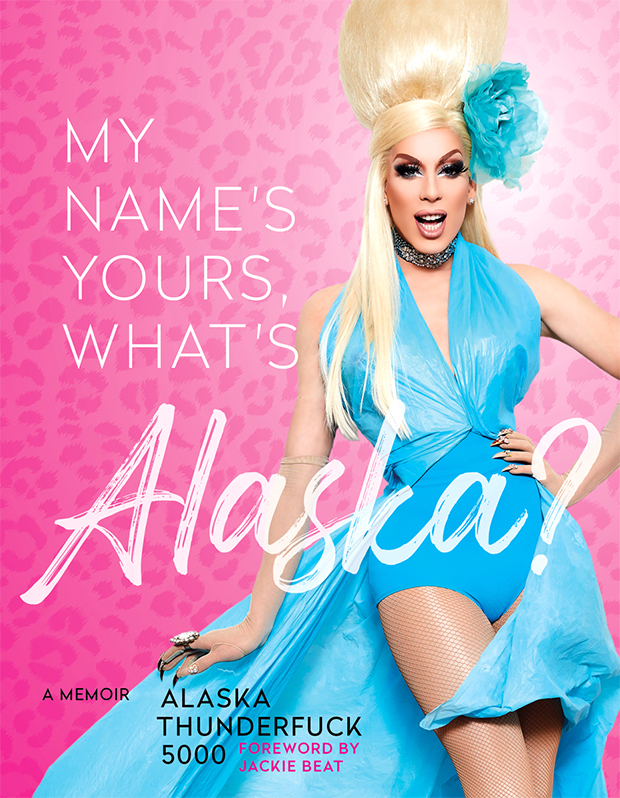 Has revisiting all these moments and memories, so to put them down on paper, changed Alaska? “Yeah, I think so,” she said. “As I said, it was like a really long therapy session. Going back to the good times, but also, the weird times, the horrible times — and going back over them, over and over again, to make sure all the commas are in the right place, and all the letters are capitalized properly — It’s a lot. It was really hard, but I’m glad I did it. But, I’m ready to see what the next thing is in my life.”

Does that mean we can’t expect a follow-up memoir in the future? “Not anytime soon,” she says before thinking. “But sure. Maybe.”