Mother’s lengthy list of requirements for a BABYSITTER goes viral, as she insists applicants for the $10-an-hour job must have a BA in childcare, be available seven days a week – and be a fan of Trump

An anonymous mother’s laundry list of requirements for a babysitter has gone viral, after she posted a detailed series of demands for any person who wants to apply for the $10-an-hour role.

The very lengthy list of requirements includes being a Trump fan, being willing to pay for some snacks for her three children, who range in age an infant to a five-year-old, and having no tattoos.

The post, which was originally posted to Facebook by the US- based woman, was later shared on the Subreddit ChoosingBeggars, where it received hundreds of comments from people who were left stunned by the list. 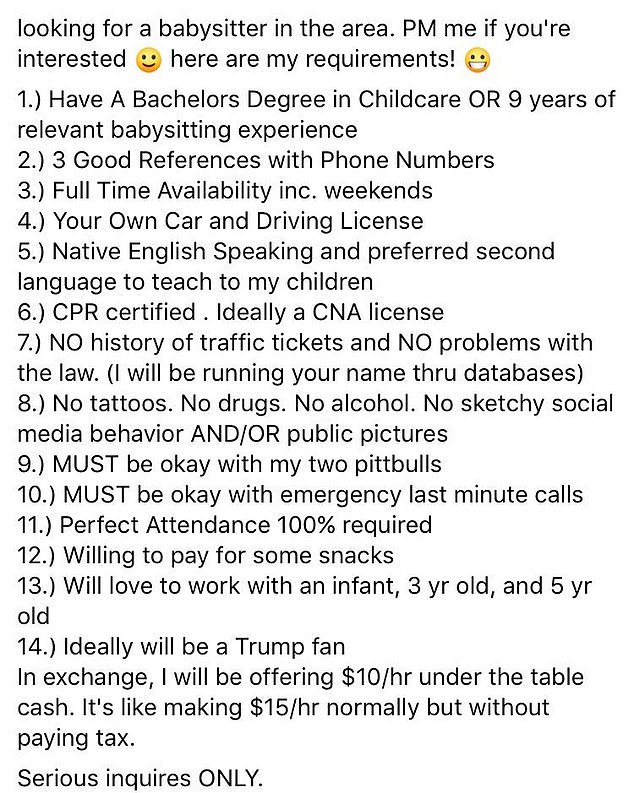 Specific: An anonymous mother-of-three posted a babysitting ad to Facebook where she listed a total of 14 specific requirements for the ideal candidate

The mother-of-three posted the advertisement that read: ‘Looking for a babysitter in the area. PM me if you’re interested. Here are my requirements.’

She then listed a total of 14 specific requirements that ranged from being an English-speaker, to having no tattoos.

And although it isn’t clear where the person lives, the requirement for them to be a Trump fan suggests that the woman lives in the U.S.

Some basic requirements included a BA degree in childcare or nine years experience working as a babysitter, three references with phone numbers, and full-time availability including weekends.

She also requires that the ideal candidate should have a driving license and a car, as well as being a native English speaker with CPR training.

However, the anonymous poster then includes a number of requirements that have left people dumbfounded. 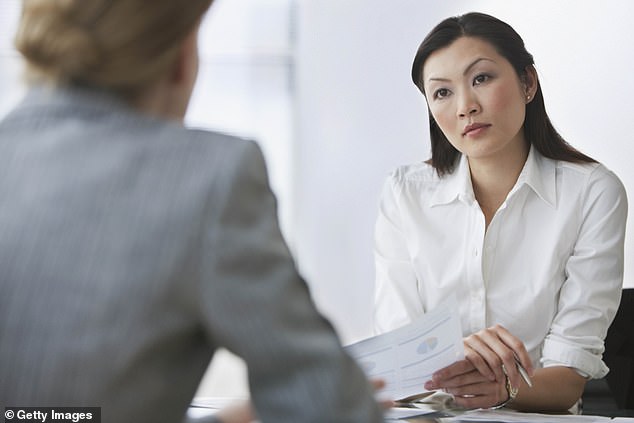 Too far? The woman’s requirements ranged from being trained in CPR and being a native English speaker to having no tattoos and to ideally be a fan of Trump (stock image)

Shocked! The post was shared to subreddit and received hundreds of comments from people who couldn’t believe the specific requirements, that included paying for snacks for the kids

The woman wrote: ‘NO history of traffic tickets and no problems with the law’, before adding that she will be running the candidates name through databases.

She added: ‘No tattoos. No drugs. No alcohol. No sketchy social media behavior AND/OR public pictures.’

The mother proceeded to add that the ideal candidate for the job must be ‘willing to pay for some snacks’, and will ‘ideally be a Trump fan’.

She detailed that the selected candidate for the job will earn $10 per hour in ‘under the table cash’.

‘It’s like making $15/hr normally but without paying tax,’ she added.

The post, which was shared on subreddit ChoosingBeggars, received hundreds of comments from people who couldn’t believe her requirements.

One person replied to the post, saying: ‘I thought she meant SHE’D be willing to pay for the babysitter snacks. I was like well I guess that’s nice, then I realized she meant the babysitters would be paying for the snacks. Lovely.’

Bizarre: The list of requirements included having no ‘sketchy social media behavior’, having no traffic tickets and having a BA degree in childcare or nine years of relevant experience

‘9 years experience is very specific!! Also, would be worried about someone who had the degree and/or experience but was still willing to graft for $10 an hour’, wrote one Reddit user.

Another added: ‘I’ve seen these ads before in NYC but they’ll pay you $60k-80k per year and other perks. Essentially you get paid to raise someone else’s kids.

‘A friend of mine did this and one of the requirements was also having a degree at an Ivy League (she did). She was able to stay at their summer home whenever and got to go to Paris Fashion Week. This lady is nuts though.’

‘For $10/hr I will come over to watch your TV and eat your snacks. Expect to return to alive children…. that’s it,’ wrote another user.

Another shocked Reddit user wrote: ‘No problems with the law but she’s committing tax fraud. Ok then.’