Visual artist Ash Keating surveys a wall in the Domain that he has, in explosive bursts, splattered with more than 300 litres of paint.

The 90-metre-long wall forms part of a culvert for the eastern suburbs railway and was, until two days ago, what one resident described as ''hideous mission brown''. Now it is a blur of pinks, blues, oranges and reds – an Instagrammable moment for curious onlookers.

The mural is Keating's second public artwork in Sydney, part of the City of Sydney’s Art & About program, a small festival started in 2001 that has grown into a year-round program of events and art. 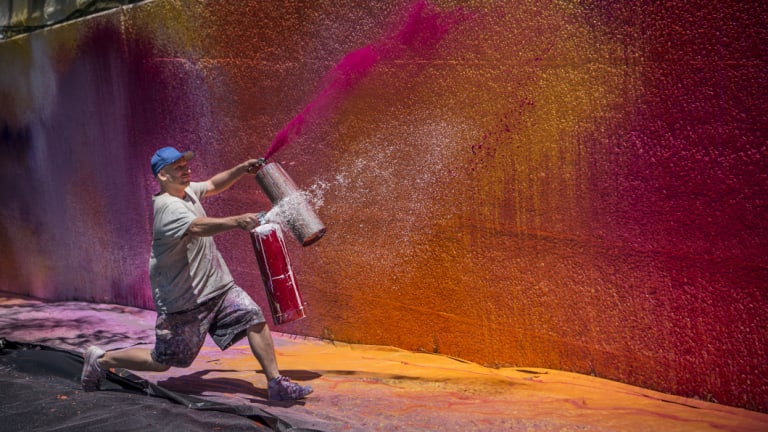 Ash Keating and his wall of colour.Credit:Wolter Peeters

Each year the City of Sydney calls for expressions of interest from artists, curators, collectives, producers, architects and designers to submit their ideas to reactivate neglected spaces or use art and theatre to explore ideas of culture, the environment and society.

Melbourne-based Keating was approached to blast colour in a rather ugly and underused space behind the Art Gallery of NSW, close to a walkway connecting Woolloomooloo to the city.

Over two days he’s used industrial airless sprayers and fire extinguishers filled with paint and water to create the intense bursts of colour that mark his practice.

Keating usually selects a palette that will complement the landscape and draw the eye. So this time he worked with dark blues at either end and whites, yellows and pinks in the middle for added softness.

He began creating murals on large concrete walls in 2004, transforming large chromatic dead spaces in Melbourne into huge studies of colour. ''Some people love it, some people don't,'' he says. ''I make work that has the capacity to be positive for any viewer.'' 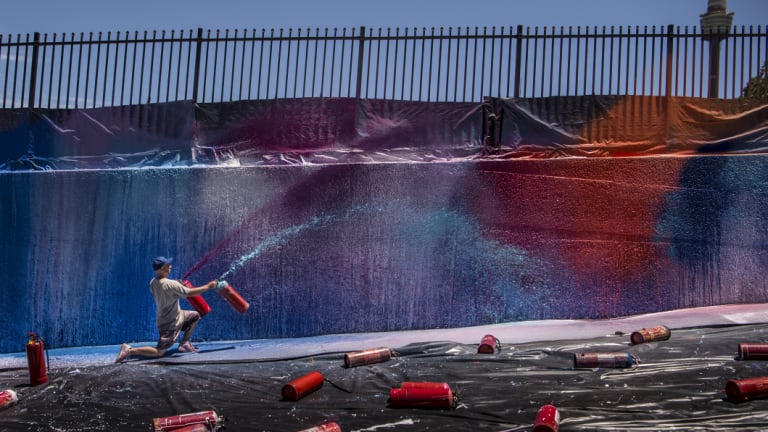 While he ''sets up the system for success'' the result is often ''a surprise to me''.

The gravity drips are part of the mural's fabric. ''It is a bit of a playground of expressive painting because I don't plan what I do and respond to the marks I make.''

Liza Bahamondes, program manager for Art & About, says the mural is the last in seven public art projects installed during the year that have included sculptures made with marine debris and a vending machine installed at Martin Place to raise awareness of mental health issues.

It's hoped the mural would remain up for one year to ''bring a burst of sunshine'' to the area, she said.