Once Glenn Loughrey’s work is done, when you enter the grand St Paul’s Cathedral in the heart of Melbourne you will first see the altar through a filter: a glass window marked with his subtle artwork depicting the Aboriginal country on which it stands.

And when you leave, “You walk out into Aboriginal countries through those windows,” Loughrey says. 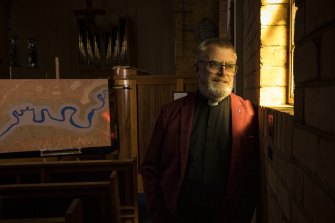 Andreas Loewe, dean of Melbourne at the cathedral, thinks of it as a parable in artistic form.

To acknowledge the importance of his work, this month Loughrey – priest, artist and Wiradjuri man – was appointed a canon of St Paul’s. He will be the first Aboriginal canon in its 141-year history (and its second First Nations artist in residence, following Maori artist and priest Regan O’Callaghan). 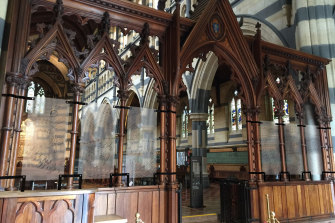 A digital rendering of the glass artworks to be installed at St Paul’s.Credit:St Paul’s

Loughrey was appointed a week ago by the cathedral chapter of St Paul’s. A canon is a member of the chapter, responsible for the administration of the cathedral.

It’s an honour, he says.

“I think it’s a recognition, an affirmation of my artistic vocation, but also of my Aboriginality,” Loughrey says. “I also see it as a partnership. We will work with the dean and the cathedral chapter to develop other artworks and other opportunities to add an Aboriginal voice to the cathedral.”

Loughrey’s transformation of the cathedral’s “narthex screen” – the carved wooden portal separating the entrance from the main body of the church – was first mooted a few years ago, and is still awaiting final approval from Heritage Victoria, before glass artisan Mark Edwards at Wathaurong Glass in Geelong creates it.

The glass map embedded in the screen will be a semi-opaque, permanent acknowledgement of country, marking the flow of the Yarra Yarra/Birrarung river in pre-colonial times, showing mountains and hills, sacred trees, human footsteps and meeting places; the Bay and the You Yangs.

“What we’re trying to do is to remind the people that use the cathedral that they’re on Kulin land and that in looking at their own faith, their own understandings, they are to look at them through the lens of the local people,” says Loughrey, who leads the parish of St Oswald’s in Glen Iris. “It’s not just transplanting and dropping into the Kulin country the Christian faith, that faith has to be mediated through the lens of the local people.”

Creativity and creation are the heart of both art and faith, he says. Though he feels a tension between the “earthy, dream-driven, spirit-driven” stories of the old and new Testaments, and the various traditions of Aboriginal spirituality, he feels able to “sit with that tension and allow whatever needs to be done, to be done”.

Dean Loewe says the cathedral wanted to have an acknowledgement of country that was “arresting, stopping people in their tracks”.

“The idea was that you entered the cathedral and immediately you saw the ceremonial space, the sanctuary space, filtered through an Indigenous perspective,” he says. “You walk in and you have your perspective changed.

“Everyone will pass through that screen, from the youngest chorister to the oldest archbishop… We haven’t reached the reconciliation that we are aiming for, we are on our journey towards that. And this will be part of the journey.”