Becoming a dad can feel like death by endless, helpful suggestions. But some advice is particularly dangerous.

"Remember, boys like simple names," I was told. "And girls hate to have the same name as other girls in their class." 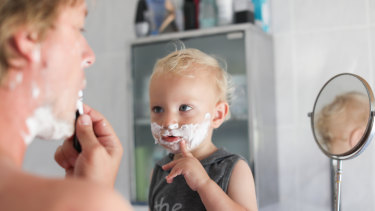 “Taking that active role in your kids’ lives can help you recalibrate, and maybe even strike a happier balance.”Credit:Getty Images

This, you understand, wasn't the worst piece of advice I ever got about fatherhood. I even thought it was relatively sane. But that tip-off came from the same source as all the bad advice that followed.

She was an older woman at work – I'll call her Pam. Now, I'd always got along with Pam. She was in her early 50s, with a mahogany perma-tan, peroxide-white hair and a voice husky from a squillion cigarettes. She was like an older stateswoman of the office whose world view flickered between irreverence and NSFW depravity. Maybe she was a little batty, but she was smart and funny, too.

Plus, she was also the most doting mum I'd ever met. Her work cubicle was like a shrine of maternal devotion. Every inch of wall space was plastered with a mad collage of photos of her long-haired son.

So when my (now) wife became pregnant, Pam took a real interest and occasionally slipped me nuggets of insider info from the other side. One afternoon in the kitchen, I got another impromptu pep talk. "When you become a dad," she said, "the most important thing is to look after your wife, so she can look after the baby."

I nodded and stashed the info away for future reference. This sounded like more solid intel. What Pam was suggesting I do was make sure my wife's every waking need was taken care of. Freeing her from the domestic treadmill made sense, I thought, because naturally she'd have a more intuitive sense of the baby's needs. Effectively, it was a divide-and-conquer strategy in a newborn nappy-pack.

That piece of advice stayed with me. I was receptive to its message, I think, because your protective instincts blaze more fiercely after you've watched your wife endure the long grind of pregnancy and the blood-curdling craziness of childbirth. Witnessing that process only deepens your sense of conjugal obligation. Suddenly you're in total awe of your wife.

The upshot is that, more than ever, you really want to take care of the mother of your child. So you cook batches of food for the freezer, amass a huge stockpile of nappies and uncover yet another source of emasculation as you struggle to install the rear-facing baby-seat (I was forced to seek professional help). You're now the default administrator of back-rubs and maker of endless cups of tea. Your role as father will be to protect and serve.

And that part of Pam's advice was fine. You absolutely should look after your wife. But that's the sneaky thing about booby traps: on the surface they look innocuous, so you blunder onwards, then boom! In the hidden-danger stakes those words were the tree branches masking a pit filled with razor-sharp spikes. And I didn't get away unskewered.

"Look after your wife so that she can look after your baby." It's the second bit that's problematic for a dad, and I only realise it now that I have a couple of kids under my belt.

It's dangerous because it nudges you to withdraw from the engine room of parenthood, gently ushering you towards a more peripheral role. And you hardly need another push because multiple forces are edging you in that direction right from the off.

For starters, you can't circumnavigate the basic facts of human biology. Nature determines that the primary bond exists between mother and child. As a dad, your role in childbirth is largely confined to that of hand-holder, cheerleader and compiler of really shit "chill-out" playlists. Whether or not you cut the cord, in the delivery room you're little more than a pillar of moral support with a frozen grin.

After that, a whirlwind of factors conspires to keep you in that auxiliary role. Emotionally, men can often be slightly distanced from the action. It's not uncommon for dads to experience a delay in bonding with their babies in the early stages. The paternal connection requires time and prolonged contact to develop.

Then there's the shit-fight over parental leave. In all but the most enlightened companies, the skimpy entitlements for new dads create another roadblock for the aspiring co-parent. After a couple of weeks in a shell-shocked daze, you're plonked back into the office while your partner is left on the sofa holding the baby.

And so it begins. Your partner's daily exposure to your child starts to build up her confidence and expertise.

She learns how to read the baby's mood, soothe his frequent outbursts and lull him back to sleep. Before long, she's turned into the household font of childcare know-how. As for you? Now you're Mum's assistant.

The roles are cast. Unsure what to feed the toddler for breakfast when the Rice Bubbles run out? Ask your wife. Can't stop the baby from wailing? Hand him over to her. Your wife has already turned into the go-to parent in all matters requiring emotional comfort or domestic nous.

There lies the trap. And it's so, so easy for things to play out this way. Subscribe to the view that it's your wife's responsibility to "look after your baby" and it's already a done deal.

Not a positive one, either. What you're sleepwalking into here is an act of subjugation that relegates you to a lesser parenting role while heaping more pressure onto your frazzled wife (who's probably doing most of the night shift as you fall short in the boob department). You have to fight against this dynamic because it doesn't have to be this way.

Think for a second about what you do at work. Perhaps you're an entrepreneur or an engineer, a maths teacher or a mechanic. Whatever. Chances are that at some stage of your career trajectory your role required some degree of professional expertise. Today, you can handle technical complexity and the snake pit of office politics. You can seal a deal, schmooze clients and know just how much to kowtow to your idiot boss.

The bottom line: you've got the skills to pay the bills. In which case, figuring out how to feed and bathe your children before getting them ready for bed is definitely not beyond your scope of capabilities. You can deal.

And if you don't feel like you can yet, well, that's okay, too. But you can train up fast. Like everything in life, from crosswords to corporate embezzlement, your dad-game will only get better with practice. Paternal confidence comes from spending time in the saddle or, more specifically, the soft-play centre. But, once you develop it, there's a huge pay-off there for you.

Most men are conditioned to define themselves by their jobs. Your profession becomes the bedrock of your identity. But that’s a high-risk play in the self-worth stakes, especially in a work environment yet to get its head around automation and artificial intelligence, plus the usual
suspects of takeovers, redundancies and trigger-happy execs. A job for life? That no longer exists.

Plus, unless you’re a rock star or Scarlett Johansson’s personal masseur, you have to ask yourself how much you love your job. Was it your childhood dream to work in middle management? Or are you doing your best, like the rest of us, plugging away in an okay gig that puts food on the table and pays your eye-watering mortgage.

There’s more to life than work. Taking that active role in your kids’ lives can help you recalibrate, and maybe even strike a happier balance.

Fatherhood isn’t all sunshine and rainbows. Often, it’s scary hailstorms or that specific type of nonstop drizzle that gradually wears away your last reserves of optimism. Being a dad can, at times,  prove tiresome, frustrating and wretchedly dull. But then you get the moments of payback.

Because fatherhood has taught me to multitask, I’m writing this on my phone. My eight-month-old son, clad in just a sunhat and nappy, is finally sleeping on my chest in a papoose. We’re sitting on a wall in the dappled shade of a plane tree near Kings Cross.

Feeling his bodyweight slumped against me, everything feels right. Sure, life is a shit-storm. I’ve got two kids under two, my to-do list gives me palpitations and I’m moving interstate in two weeks.

Yet, sitting here, cradling my son’s head in one hand … it not only calms me, it gives me a sense of perspective. There’s nowhere I would rather be, even if I were Scarlett Johansson’s personal masseur.

This article appears in Sunday Life magazine within the Sun-Herald and the Sunday Age on sale September 1.