Sanjiv Gopal can predict the way the conversation will go when a barista needs to take down his non-Anglo, although hardly unusual, name.

"It’s always what’s your name? What? What? How do you spell that?” says the Melbourne film director.

To prevent embarrassment, and the risk of missing his 8:45am tram to work, Mr Gopal has adopted the coffee alter-ego of "Nick" (his middle name is Nicolas). 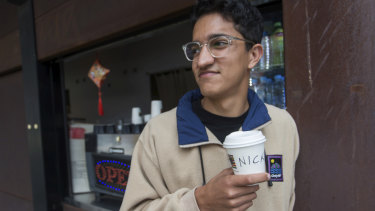 Sanjiv Gopal has found his non-Anglo name is still something that people trip up on. His “coffee name” is Nick.Credit:The Age

“I got pretty sick of having to run through the same dialogue every time I wanted to order something.

“Nick is easy and saves time, so it’s stuck,” says Mr Gopal, whose mother is Peruvian, and father Indian. In Tamil folklore, his name means "plant the gives eternal life".

He is not alone, and says plenty of people with non-Anglo names choose to adopt an Anglo name that sounds similar to their real name to make life easier, given "most people do not make the effort to get it right".

After introducing herself at her first "English Connect" class in 2018, the coordinator scribbled a name on the top corner of her paper: "Jan."

Her teacher had granted her a quintessentially English name for the benefit of something simple and memorable for the class.

“When I saw my tutor struggling to read my name on attendance sheet, I kind of felt guilty. Why didn’t I change my name to something easier to remember for them?”

I thought it would give my CV an equal chance to be looked at.

She says the new name was originally used exclusively in the classroom. Soon after she was ordering her coffee as Jan, had changed her name on her CV, and even set up a new Gmail account to keep things consistent.

“I thought it would give my CV an equal chance to be looked at and give me an equal opportunity to be called for an interview."

Research on resume discrimination in Australia shows people with Chinese, Middle Eastern or Indigenous-sounding names are at a disadvantage.

In 2011, researchers from the School of Economics at the Australian National University sent out 4000 identical job applications to internet advertisements for wait staff, data entry, customer service and sales jobs: the only difference on each application was the origin of the applicant’s name.

Chinese-named applicants had a one in five chance of landing an interview. Sydney employers tended to be more discriminatory than Melbourne or Brisbane, but were more accepting to those with indigenous names, while Melbourne employers were more likely to respond well to Italian sounding names than any other name category.

Dr Andrew Leigh, an researcher on the project (and now the ACT shadow assistant treasurer), says discrimination is still common within the workforce and hoped analysis could help address issues of inequality and intolerance towards ethnic diversity.

“Racial and ethnic discrimination remains a reality for many Australians. Discrimination isn’t just unfair, it also acts as a drag on the economy. Careful analysis of the magnitude of this discrimination can help us craft policies to combat it,” he says.

Co-author Associate Professor Shyamal Chowdhury says the study indicated the probability of receiving an interview offer effectively doubles for applicants who switch from a Chinese name to a localised name.

Of course, there is more to a name than how it sounds or looks on paper. In many cultures, given and family names hold significant ties to a person's history.

While there’s no point crying over spilt milk, maybe we ought to consider how people feel ordering a cappuccino.