Australian security agencies gave “technical assistance” with the drafting of the law, which is currently being challenged in the country’s Supreme Court and allows for the jailing of suspects without charge for weeks. 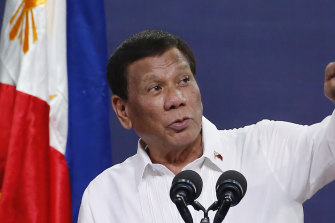 Rodrigo Duterte’s government has been criticised over its human rights record.Credit:AP

The law came into effect last year just as President Duterte’s government was battling outbreaks of COVID-19 and arresting people for not complying with a lockdown.

Civil society groups warn the Anti-Terrorism Act draws no lines between dissent and terrorism and provides Philippine security agencies with too much power to detain people without an arrest warrant.

It allows for the surveillance, warrantless arrest and detention of suspects for up to 24 days.

The Department of Foreign Affairs and Trade confirmed Australia provided “technical assistance” over three years to help with the development of the legislation.

“This assistance has sought to bring Philippine counter-terrorism legislation to modern international standards, including consistency with UN guidance,” DFAT said in response to a question on notice from Senate estimates.

Human Rights Watch’s Australian director Elaine Pearson said she could understand why the Australian government wanted to provide technical assistance, but “the end result has been a human rights disaster”.

“It does not meet international standards. In fact, the Anti-Terrorism Act is so bad that it has been widely criticised by UN experts and there are multiple legal challenges in the Philippines against it.” she said.

“The new Anti-Terrorism Act unfortunately weakens existing human rights safeguards, broadens the definition of terrorism to something hopelessly vague and expands the period of detention without a warrant from 3 days to 14 days which can then be extended for another 10 days.”

“The Australian government should be pressing the Philippine government to repeal the law and replace it with one that meets international standards.”

“This anti-terrorism law is another weapon to quash dissent and arbitrarily detain anyone deemed by Duterte to be an enemy of the state.

“The Australian government has handled its international responsibilities poorly and it is deeply concerning to learn our government has aided Duterte’s brutal regime.”

A United Nations investigation last year lashed the Philippine government, demanding an end to extra-judicial killings and arbitrary arrests and the persecution of civil society groups.

The report found while the Philippines had a long-standing tradition of human rights advocacy and civil society activism, attacks on human rights defenders were “pervasive”.

The office documented the deaths of at least 248 human rights defenders, legal professionals, journalists and trade unionists between 2015 and 2019.