Australia Post chief executive Christine Holgate threatened to call police unless the City of Melbourne delivered more than 100 of Pauline Hanson's One Nation-branded stubby holders to every apartment in a locked-down suburban public housing tower in July.

Ms Holgate's written ultimatum, through her senior legal counsel, came days after Senator Hanson had labelled residents of the Melbourne towers “drug addicts” and “alcoholics”, and at the same time Australia Post was attempting to win over One Nation's vote to ensure a temporary relaxation in daily postal services was not overturned by the Senate. 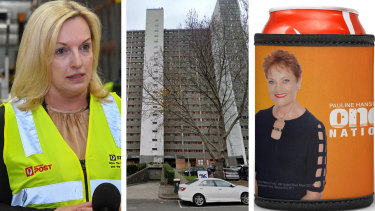 The 114 parcels were intercepted by the council while it was managing the week-long Victorian government-enforced lockdown of some 3000 people spread across nine towers in two separate estates in Flemington and North Melbourne in the city's inner north-west.

Officials overseeing distribution of food, medical supplies and mail at Canning Street, North Melbourne opened one parcel addressed "to the householder" of an unoccupied flat and decided against distributing the stubby holders. The paraphernalia would, sources said, inflame what was already an "emotional tinder box" within the tower following Senator Hanson's comments on the Nine Network's Today program earlier that week.

The Queensland senator had referred to the residents of the towers as "from war-torn countries" and said "probably English is their second language" and they had not "adhered to the rules of social distancing". 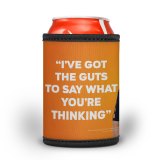 The stubby holders in the parcels were accompanied by a hand-written note from Senator Hanson saying “no hard feelings”.

The stubby holders, with Senator Hanson's face and emblazoned with the slogan "I've got the guts to say what you're thinking", was accompanied with a hand-written note that read: "No hard feelings".

In an email, seen by The Age and The Sydney Morning Herald, Australia Post's general counsel and corporate secretary Nick Macdonald said the organisation would notify "the Police or other relevant authorities" unless the 114 parcels were delivered "without further delay".

"If it is correct that the parcels have not been distributed as addressed, this is of very serious concern," the email dated Saturday, July 11, reads.

"The integrity of the mail is of paramount importance and it is a fundamental principle that mail should be delivered as addressed without delay or interference, subject to safety and other relevant protocols being adhered to.

Mr Macdonald said in the circumstances, it was necessary for them to notify their customer, Pauline Hanson, of the delay.

Australia Post sources familiar with the tense stand-off over the delivery said Ms Holgate also personally pushed for the delivery of the parcels to the residents of the tower block in exchanges with the council.

Ms Holgate did not respond to the question of whether she spoke to Senator Hanson or One Nation directly prior to authorising the emailed threat.

In a statement, Mr Hanney said the council had responsibility for overseeing the receipt and distribution of essential supplies to residents in the North Melbourne public housing estate.

"The City of Melbourne consulted with Australia Post and also sought advice from the Federal Police about whether the delivery breached the Commonwealth Criminal Code," Mr Hanney said.

He confirmed the council requested Australia Post collect the parcels and they were not distributed.

In a statement on Tuesday night, an Australia Post spokesman said it took its obligation to deliver mail as addressed "seriously" and "given the unique nature of the circumstances" delivered all mail to authorised officers at the site control centre.

"Upon subsequently being made aware that the items did not reach their ultimate destination, we raised it with the City of Melbourne and engaged with the sender in good faith to resolve the matter," the spokesman said.

In April the Morrison government granted temporary regulatory relief requested by Australia Post to allow letters to be delivered in metropolitan areas every second day, rather than every day, remove priority mail product and extended delivery time for intrastate letters to five days.

A month later the federal opposition announced it would seek to overturn the changes in the Senate with the support of the Greens. The disallowance motion, which is still to come to a vote, needs four of the five-person crossbench, to succeed.

The Sydney Morning Herald and The Age revealed in July that Ms Holgate and her executive general manager Sue Davies had flown to Brisbane to give Senator Hanson a tour of its Brisbane distribution centre.

Senator Hanson's spokesman, James Ashby, said on Wednesday the parcels had been "dealt with" and "delivered". When asked who had requested Australia Post issue a legal threat to ensure they were delivered he replied: "I'm unsure".

Ms Holgate, who earned $2.7 million as the nation's highest-paid public servant last year, is also the federal government-appointed chair of the Australian-ASEAN Council Board, which aims to promote Australia's interests in south-east Asia.

She has come under fire in recent weeks for attempting to convince Australia Post's board to pay out more than $7 million in bonuses to executives despite declaring in March she and her senior colleagues would waive any right to bonuses because of the COVID-19 induced economic downturn. While the board eventually rejected the about-face, Ms Holgate was paid a deferred bonus of $277,000 from last financial year.