It was a year in which virtually no international acts toured, where the money which might have been spent attending gigs of local acts went unspent, where major artists around the world held back releasing new music. And yet, Australian artists still struggled to sell their music to Australians.

The release by the recording industry peak body, ARIA, of end-of-year charts for 2020 presents a sobering picture to an industry still unsure who and what will survive the wreckage wrought by COVID-19.

The one thing we can be sure of is that British pop star, actor and fashion plate Harry Styles – with the top selling and 54th best-selling albums, and the sixth, 11th and 78th most popular singles – is surviving just fine. 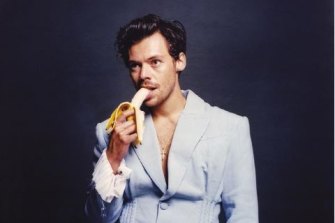 Harry Styles had the top album of 2020 with Fine Line.Credit:Instagram

There was only one Australian act, AC/DC, in the top 10 albums. Pedants might even quibble at that, given most of AC/DC are not Australian or live in Australia. The top 10 singles of the year (of which The Weeknd's Blinding Lights took out no.1 spot) also featured only one Australian artist, Tones And I, with Dance Monkey at no.4.

If you go beyond the top 10 albums, there were only 11 Australian artists in the rest of the top 50, and 19 in the top 100, or 20 per cent of the total. Of those, four were greatest hits compilations of acts whose heyday was more than 30 years ago (Cold Chisel, Paul Kelly and INXS) or whose market is the under-5s (The Wiggles); one was a Christmas record (Delta Goodrem); another was a remixed version of a 2016 album (Hilltop Hoods); and one was a still-selling 2015 record (Currents) from Tame Impala, whose most recent album, The Slow Rush, was the second highest selling Australian album of the year, at no.19. 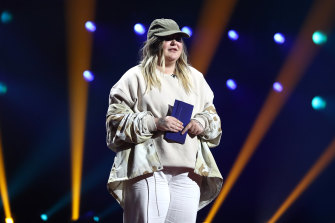 Only one Australian artist, Tones And I, pictured in November, made it into the top 10 singles of the year.Credit:Brendon Thorne/Getty Images

These would be worrying statistics even without considering that the industry says it has not yet seen seen the full benefit of a mid-year federal government announcement of help for the arts industry. It may yet encourage a new leadership at ARIA to take up the argument, made within the industry for many years, for an increase in the quota of Australian music played on commercial radio, and a stricter enforcement of the quota.

The best representation by Australians can be found in the dance charts where 15 of the top 50 albums were Australians, including Hayden James at no.3 and Rufus Du Sol at no.6 and no.8 (although no.8 is a remix version of the album at no.6). Noteworthy too is that one quarter of these albums come from the one label, the independent Future Classic.

As for country music, there were 10 Australian albums in the top 50: three of them from Keith Urban, whose newest record was the best-selling local release, coming in just behind the top two, both from this year’s breakout act, American Luke Combs.

Apart from the consistently strong northern NSW sisters, the McClymonts, whose new album was at no.12 just behind Taylor Swift’s 2010 Speak Now, there were two compilations from Slim Dusty, who died in 2003, and a John Williamson favourites collection, alongside new records from Lee Kernaghan and Adam Brand (at no.45 and no.46 respectively) and Morgan Evans’ Things We Drink To, one spot behind the McClymonts, two years after its release.

As the McClymonts’ result may suggest, it’s best not to ask about Australian women, unless you’re related to Tones And I’s Toni Watson, who had three singles in the top 100, and an EP at no.39. The only other Australian female artist in the singles chart was Vera Blue, guest vocalist on a track by Flume, while Delta Goodrem and Kylie Minogue trailed well behind Watson in the album charts.

Let’s end on some good news – vinyl sales. Thanks to direct selling to fans, a surge in interest from consumers who don’t necessarily own a turntable but like the idea of owning another artefact, and bundling of merchandise such as T-shirts with them, Australians dominated the vinyl chart. Not only was Tame Impala’s The Slow Rush the bestselling vinyl album of 2020, there were another four Australian acts in the top 10 (the long defunct Powderfinger, AC/DC, Tame Impala again and Kylie Minogue) and a further 13 in the top 50.

Mind you, if the future of Australian music is in vinyl, things may be scarily worse than we realise.