Australians are being promised a path out of lockdowns from as soon as next year while international arrivals will be halved within weeks in a four-stage national plan to move on from suppressing COVID-19 in order to live with the virus.

National cabinet backed the proposal to use lockdowns and border checks as required until at least the start of 2022, when the vaccination rollout could reach a key threshold to ease the controls. 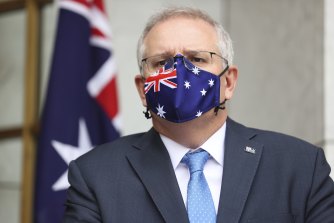 Prime Minister Scott Morrison announced the four stages promised to get the country back to normal.Credit:Alex Ellinghausen

Prime Minister Scott Morrison said the plan would need a “mindset change” in the community around living with COVID-19 even when cases increased because vaccinations would prevent serious illness and death.

But premiers and chief ministers have agreed only in principle and will not finalise their position until they see advice from scientists in the next few weeks on the vaccination rate needed to open borders.

Mr Morrison said the four stages promised to get the country back to normal with uncapped inbound arrivals, the end of quarantine for those who were vaccinated and the removal of bans on Australians who wanted to travel overseas.

“The idea of having lockdowns is based on the premise that community transmission would lead to serious illness, hospitalisation and fatality,” he said.

“So if you’ve got the vaccination in place, what’s the point? That’s the mindset change that we’ve agreed today.

“Our mindset on managing COVID-19 has to change once you move from pre-vaccination to post-vaccination. That’s the deal for Australians.”

But the four stages hinge on the success of the vaccine rollout when the federal government has missed its earlier targets and state leaders are calling for more supply of the Pfizer vaccine after angry debates over whether the AstraZeneca product should be offered to younger Australians.

While 70 per cent of people aged over 70 have received at least one dose, protecting some of the most vulnerable, only 8 per cent of the eligible population have received the two doses needed for full vaccination.

University of NSW epidemiologist Mary-Louise McLaws said the country should aim to vaccinate at least 80 per cent of adults this year and plan for a series of booster shots next year to adapt swiftly to changes in the virus.

“It would be nice to get to 85 per cent but if we get to 80 per cent we’d be doing well. The community needs to hear the target because it needs to see how important vaccination is,” she said.

The number of people entering Australia through state hotel quarantine systems will drop from 6070 to 3035 per week after NSW Premier Gladys Berejiklian expressed her concern about the move but accepted the outcome in the national cabinet’s online meeting on Friday morning.

The federal government will ramp up its own repatriation flights to Darwin to meet some of the demand during the lower cap on international arrivals, with an estimated 34,000 expatriate Australians still seeking to come home, including more than 10,000 in India.

The cut will be reviewed in August and a new inquiry will be launched into the hotel quarantine system to consider stronger rules to stop breaches that have spread the highly contagious Delta strain into the community.

The national plan includes a trial of seven-day home quarantine as an alternative to 14 days in hotel rooms, with South Australia testing the idea. Professor Kelly said it could be safer for vaccinated people to be at home because it would avoid interaction with hotel staff.

A task force led by the head of the Department of Prime Minister and Cabinet, Phil Gaetjens, will develop the plan with modelling from the Doherty Institute about the level of vaccine coverage needed before governments can move to the second stage.

Lieutenant-General John Frewen, who heads the COVID-19 Task Force, said he expected all Australians who wanted a vaccine to be offered one by the end of December. This means the lower arrivals cap is likely to remain until early next year.

Labor leader Anthony Albanese backed the cut to international arrivals but accused Mr Morrison of failing to deliver on earlier promises and doing too little to expand the vaccination program and invest in new purpose-built quarantine centres.

“This Prime Minister is someone who reacts rather than leads, and I think this is an example of it whereby he’s reacted because of the fact that 12 million Australians are locked down,” he said.

Victorian Health Minister Martin Foley said the new plan showed national cabinet had “pretty much endorsed” a series of proposals from Mr Andrews ahead of the meeting.

Mr Andrews released a four-point plan prior to Friday morning’s meeting requesting a reduction in international arrivals, refined criteria for eligibility to fly in and out of the country, a nationally agreed vaccine target and more alternative quarantine options.

Ms Berejiklian said she was disappointed with the cut in return travellers.

“NSW, without complaint, has been welcoming home 3000 Aussies every single week … yes, we have had issues, but if you compare that to other states who have only had a few hundred coming in or far less numbers, bringing less people home doesn’t mean you won’t have outbreaks,” she said.

“My heart goes out to thousands of Australians who have to wait longer to come home.”

With Michael Fowler and Mary Ward