With no stars and no telecast, and without the backing of the Hollywood establishment which had urged them to take a year off to clean house, the organisers of the 79th Golden Globe Awards proceeded anyway, announcing winners in 14 film categories and 11 television categories.

Australia’s winners were Nicole Kidman, for her performance as American television icon Lucille Ball in the Amazon Prime Video movie Being The Ricardos, Sarah Snook, for the HBO series Succession and Kodi Smit-McPhee, for The Power of the Dog. The Power of the Dog also took out the best director award, for New Zealand director Jane Campion, and best motion picture, drama. 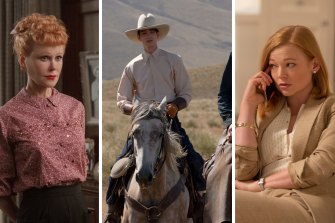 Golden Globes winners, from left: Nicole Kidman in Being The Ricardos, Kodi Smit-McPhee in The Power of the Dog and Sarah Snook in Succession.

The awards came after a year of brutal headlines in which the Hollywood Foreign Press Association (HFPA), the voting body for the awards, were hammered by reports of self-dealing, and industry scrutiny on the group’s lack of black members. That it took place at all surprised many after broadcast partner NBC flagged they would not televise it. “Change of this magnitude takes time and work, and we feel strongly that the HFPA needs time to do it right,” NBC said.

Which makes the thinking behind the decision to go ahead difficult to determine. Was proceeding without stars an act of contrition? Or was proceeding anyway an act of defiance? “The HFPA is forging ahead with a ceremony, despite the urging of numerous industry constituencies and its longtime broadcasting partner NBC to take a year off,” is how The Hollywood Reporter headlined it.

In one sense, politically, the Globes had little choice. The Hollywood establishment PR firms, which have led the anti-Globes blockade, fuelled by their A-list talent rosters had, with the backing of several studios, pushed a rival event, the 27th annual Critics’ Choice Awards, into the Globes’ airspace. The value of film marketing and box office dollars make all the players in this political pas de deux naturally predatory. 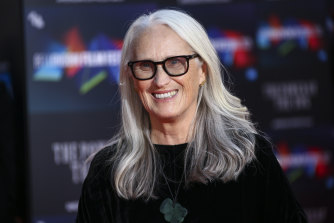 Jane Campion at the premiere of The Power of the Dog at the BFI London Film Festival last year.Credit:Invision

Both events were scheduled to take place on the same day, with squabbles over the date and venue clashes filling inches of coverage of the town’s influential trade dailies, The Hollywood Reporter, Variety and Deadline last year. The Critics’ Choice Awards, a less established brand, hope to find a more prominent place in the pre-Oscars awards season. Due to the COVID-19 Omicron variant, however, the CCA’s have delayed their telecast.

And for the Globes, its eight-decade history, despite the battering that has already taken, was too much to gamble on a complete surrender. Variety reported last week organisers had sent emails to several PR agencies inquiring whether their clients might attend. That move did not bear fruit.

Instead, the award ceremony was held at its traditional venue, the International Ballroom at the Beverly Hills Hotel, attended only by the members of the Hollywood Foreign Press Association, and representatives of the non-profit organisations which the HFPA supports through its grants program. Those representatives presented categories and named winners.

The grants dinner, normally held later in the year, was bundled into the Golden Globes perhaps in an attempt to shift the emphasis onto the organisation’s philanthropy. The Hollywood Reporter said last year the HFPA had given away US$50 million over 27 years to more than 70 causes, ranging from film scholarships and film restoration to humanitarian causes and journalism organisations.

Among the recipient organisations have been the Committee to Protect Journalists, the International Consortium of Investigative Journalists, and the Reporters Committee for the Freedom of the Press. During the pandemic, the organisation also donated US$1 million to Feeding America.