The National Gallery of Australia may extend the opening hours of its landmark Matisse & Picasso exhibition after suffering a visitor slump in the wake of the bushfire emergency that saw as few as 200 people walk through its doors on some fire-affected days.

Visitor numbers to the Canberra institution rebounded last weekend to the daily average of 2000 but have yet to return to the December peak when 3000 people visited Australia's first exhibition to tell the story of the artistic relationship between two of Europe’s greatest 20th-century artists. 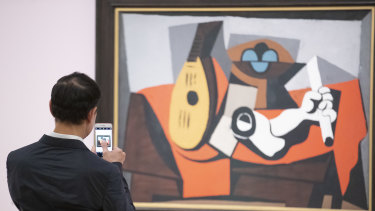 A visitor to the NGA’s Matisse & Picasso blockbuster records his impressions. Credit:NGA

Successive days of poor air quality – deemed at times to be the worst in the world – combined with fire threat, blocked roads and a hail storm kept interstate visitors and locals away.

Throughout January visitor numbers to its summer blockbuster had been down 50 per cent on expectations, NGA director Nick Mitzevich said. On its worst days, when the ACT government was advising people to put off non-essential travel, the gallery received a mere 200 visitors. 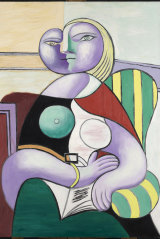 Mr Mitzevich would have welcomed the opportunity to extend the exhibition period beyond its closing date of April 13 if the show wasn't already touring to the National Gallery of Singapore.

The upside of Australia's "unprecedented summer" was the chance to see, without queues, an exhibition that would probably never travel to Australia again.

"If you want a wonderfully leisurely calm Saturday or Sunday or even the middle of the week, now's the time to visit the National Gallery," Mr Mitzevich said. "You can see things without the crowds being five deep.

"We've got works by Matisse and Picasso that have never travelled from their respective galleries. For the first time, you see two of the biggest figures of the 20th century rubbing shoulders with each other and you see why their work evolved in the manner that it did.

"It's such a direct exhibition and you can see why Matisse or Picasso did the things they did in their work, each influenced by the other. It's more a journey of inspiration than a boxing match. They spurred each other on and pushed their art."

Coronavirus had had a marginal impact on the gallery with international visitors comprising 2 per cent of its audience, Mr Mitzevich said.

"Over January our visitation was down 50 per cent, and that wasn't just the gallery. We've been speaking to many of our cultural and tourism colleagues, and our hotel partners and across the board in Canberra, those stakeholders all experienced a similar impact."

The gallery had estimated 150,000 visitors would see its summer blockbuster comprising 60 paintings, sculptures and costumes. A sustained slump in visitor numbers would have implications for the NGA's budget but it was too early to predict such an event, Mr Mitzevich said.

"There's still lots of time, there's still weekends and Easter and I would encourage people to plan their trips to Canberra to see this exhibition."