An author has praised the anonymous ‘angel’ who comforted her 21 years ago as an overwhelmed first-time mother.

In a moving Twitter thread, Amanda Jennings told of the woman who crept in to comfort her while she was sobbing in a London hospital ward, and reassured her that she was ‘the only mother her baby needed’.

Jennings, now a mother-of-three, says she still thinks of the woman to this day and now passes this advice onto new mothers as ‘acts of kindness are so important’. 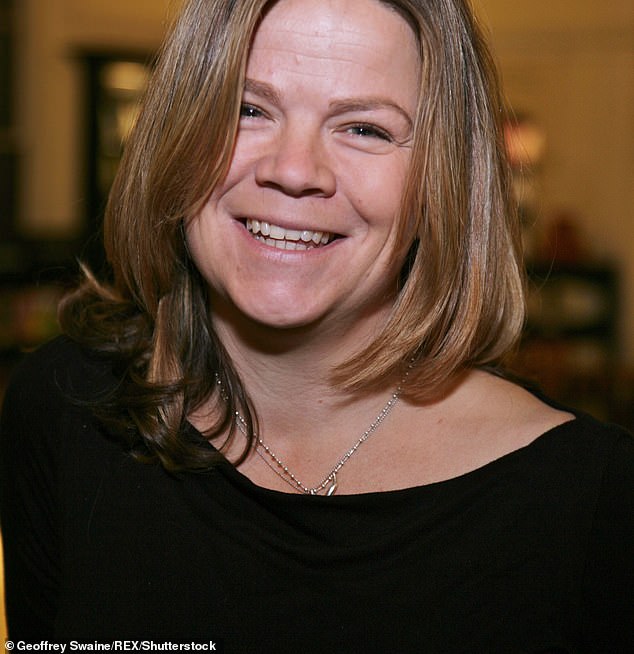 Author and mother Amanda Jennings, pictured at a book launch in 2012, shared her moving story on Twitter, admitting that as a new mother she was overwhelmed and sobbing 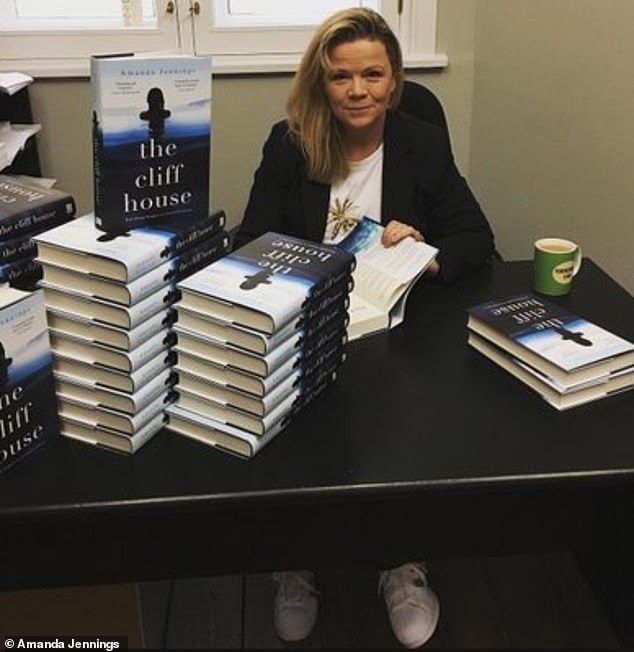 Amanda Jennings signing copies of her book, The Cliff House. The now mother-of-three says she shares the kind advice with other mothers she sees, sparking a chain of kindness

The writer said that after her first child was born, she was in hospital feeling overwhelmed, out of her depth, and unsure how to soothe her newborn baby.

She was comforted by another anonymous mother, who had just given birth to her third child, who crept through the ward at Queen Charlotte’s Hospital in London to hug her.

Jennings, who says she often thinks of the unidentified woman still to this day, says the woman told her: ‘You are the best and only mum your baby wants.’

Amanda shared her heartwarming story on social media, inspiring thousands of other mothers to do the same.

She wrote:’ If there’s a lady out there with a 3rd child aged 21, born around 25th Nov, who 21yrs ago crept through the curtains in a ward at Queen Charlotte’s to comfort a sobbing new mum who felt overwhelmed, hugged her and said ‘you are the best and only mum your baby wants’. THANK YOU. ‘

Amanda went on to praise the unidentified woman for the gesture, writing:’I think about that lovely woman a lot. It was such a simple gesture. So lovely. 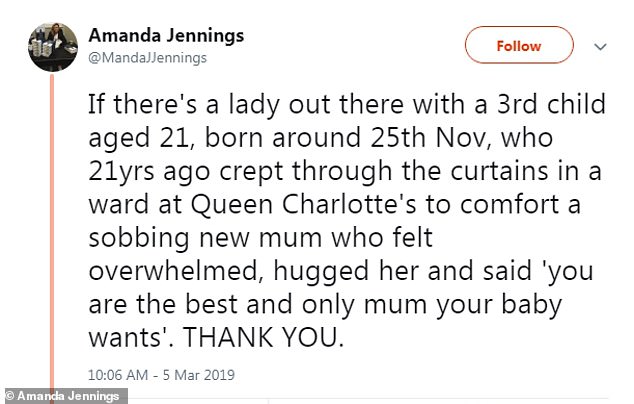 Jennings went on to say that she thought about the lovely woman a lot, and now shared her message with other new mothers

‘I felt very lost, unsure how to soothe my baby, out of my depth, and she was like an angel.’

‘I often pass her message on to other new mums. These small acts of kindness are so important.’

The story inspired thousands to respond to her tweet with their own stories of kindness from strangers.

‘After my Caesarian I was afraid to look at my scar. The woman in the next bed showed me her scar, which made mes less afraid,’ one woman wrote,’Apparently when she was afraid, another woman showed her scar. So later I showed my scar to someone else. I hope the chain is still going on.’

Another wrote:’How lovely! Similar 11 years ago when I was trying not to cry while pushing miserable newborn (undiagnosed silent reflux) around the City of London. A besuited woman stopped and said, ‘It doesn’t feel like it, but you’re doing brilliantly.’ Made my heart well up.’

Other mothers took to Twitter to tell their own moving experiences with a newborn, with many remembering the kind words of strangers

Others shared stories of feeling frazzled trying to parent older children and the kind words of strangers that they wouldn’t forget.

One wrote:’ Sounds like the lovely lady who approached me in a supermarket when my two daughters aged 10 months and 2 years at the time were both having a tantrum from hell. She touched me on the arm and said ‘it does get easier, I promise’ while others were glaring with disapproval. Saviour.’

Another said: ‘My kids struggled with potty training. Years ago, in a public bathroom, my kid was apologizing and crying due to an accident. When we came out a woman told me she loved how kind and patient I was. Two words I did NOT feel. I won’t forget that either.’