February is already on its way, which means Valentine’s Day is right around the corner. If you were planning on buying a box of chocolates in honor of the holiday, you might want to think again. Why is that, you ask? It’s because Baked by Melissa’s Valentine’s Day cupcake flavors have arrived, and they seem delicious. Once you read more about each mini cupcake, I bet you’ll choose a Baked by Melissa box over an OG chocolate heart when the romantic holiday comes around.

Don’t get me wrong: Chocolate hearts are adorable, and I’d be thrilled to receive one on Feb. 14. However, I’d really love to try each and every cupcake that Baked by Melissa has in store for Valentine’s Day. If you’re familiar with the company, you probably know that it releases holiday-themed cupcake boxes regularly. However, the flavors in its Valentine’s Day collection seem sweeter than ever, and I can’t wait to give each cupcake a try.

Before I get into detail about each flavor, take a look at the cupcakes in all of their sweet and sugary glory:

Aren’t they adorable? Between the cupcakes’ Valentine’s Day sprinkles, white and pink frosting, and red hearts, they’re the perfect treats for anyone celebrating the romantic holiday on Feb. 14. Heck, even if you’re not planning on celebrating, go ahead and treat yourself to a cupcake. You deserve it.

OK, let’s get into detail about these flavors, shall we? Based off of Baked by Melissa’s online store, each cupcake has something unique about it — whether it’s a particular type of filling, colored sprinkles, or flavored icing. Take the Milk Chocolate cupcake, for instance. It’s an exclusive Valentine’s Day chocolate cupcake that’s filled with chocolate pudding, topped with chocolate icing, and decorated with heart sprinkles and chocolate chips. As someone who loves chocolate pudding (er, I mean, chocolate everything), I’m super excited for it. 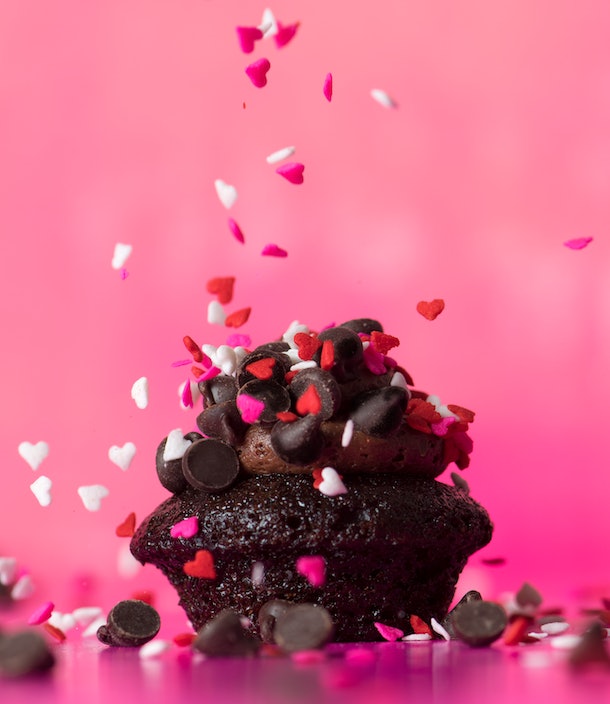 Another chocolate cupcake flavor included in Baked by Melissa’s Valentine’s Day package is the Dark Chocolate option, which features chocolate cake that’s stuffed with dark chocolate ganache (!!!). Instead of sprinkles, it’s topped with pink and red icing to give it a Valentine’s Day flair.

If you’re not into chocolate, have no fear. You can choose from other exclusive Valentine’s Day flavors, like the Red Velvet cupcake or the Strawberry cupcake. By the looks of it, the Red Velvet option is topped with cream cheese and a heart-shaped sprinkle, while the Strawberry selection is topped with strawberry icing and strawberry streusel. The remaining Valentine’s Day options include Vanilla Creme — which is stuffed with Bavarian creme — and White Chocolate, which is filled with white chocolate ganache. TBH, they all sound delectable.

If you’re hoping to by a pack or two of Baked by Melissa’s Valentine’s Day flavors, you can purchase them on the company’s website in various box sizes. Whether you want to buy a box for your bae, your best friend, or yourself (holla), you’ll be covered.