The Battle of Britain was more than 10 weeks old but the residents of Hailsham, Sussex – accustomed to watching dogfights overhead – had never seen anything quite like it. Screaming just feet above the town’s rooftops were the aircraft of Hauptmann Horst Liensberger and Flying Officer Percy Burton. As the two aircraft lifted away over the nearby countryside, they were just yards apart with Burton’s Hurricane on the tail of Liensberger’s Messerschmitt 110 fighter-bomber. What happened next was certainly deadly but it was also controversial.

Eighty years on, there is still a debate over whether Burton should have been awarded the Victoria Cross, Britain and the Commonwealth’s most prestigious gallantry award for bravery in the face of the enemy.

The dramatic events of that autumnal morning had begun in earnest at 8.30 on September 27, 1940, when formations of German bomber aircraft and their fighter escorts taxied out before taking off from northern France for another attack on England.

The enemy bomber force comprised 15 Junkers and 24 Messerschmitt Bf 110s, while an indirect escort was flown by 40 Me 109s.

Their objective was to draw British fighters into the air and thus weaken defences ahead of two larger attacks later the same day.

The plan worked and British fighters rose to meet the threat. Indeed, between 8.45am and 9.05am, no less than 160 Hurricanes and Spitfires had been scrambled.

As the German aerial force passed between Dover and Hastings, the formation of Junkers 88s flew at around 15,000ft, with the Me 110 formation 1,500ft above them. Higher still, just below the cloud ceiling at 21,000ft, flew the top cover of Me 109s.

Coming under RAF attack, the German formations were stretched out and, eventually, broken and aerial duels commenced above the Sussex and Kent countryside.

One thing was soon clear; the superior RAF force was in the ascendancy with the Messerschmitt 110s of V/LG 1 faring the worst.

The defensive circle that they had been flying in was in chaos and, when they attempted to run for home, things turned from bad to worse. With heavy losses, it was every man for himself. 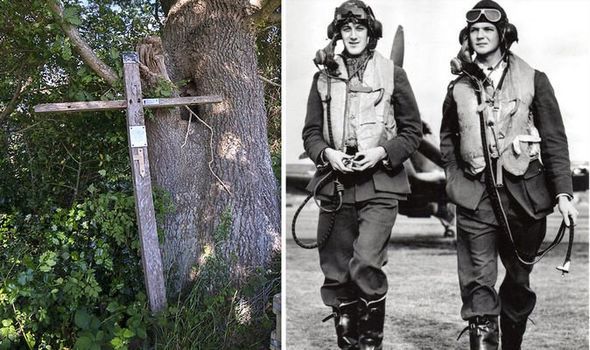 Percival Ross-Frames Burton, who was born in Cape Province on June 6, 1917, had learnt to fly at Oxford University prior to the start of the Second World War. From the outset of hostilities, he took up a commission in the Royal Air Force Volunteer Reserve, flying in Hurricanes from June 1940.

Now, on the morning of September 27, 249 Squadron was scrambled into action from RAF North Weald in Essex at about 8:50 with 12 Hurricanes including Burton’s.

In Mayfield, Sussex, George Tuke, a schoolboy and a Home Guard messenger, stood mesmerised as the Me 110 flown by Liensberger, the Austrian Commanding Officer of the Luftwaffe’s V/LG 1 squadron, hurtled southwards with a Hurricane in close pursuit.

In Tuke’s own words, “it was almost attached to the German’s tail”. Farmer’s son Doug Weller had one of the clearest views of what happened next. He later recalled: “The sound of aircraft north of Hailsham alerted me to the fact that they were coming my way.

Then I saw a Messerschmitt 110 approaching at great speed over the rooftops… with the German insignia clearly visible in the morning sunlight. At the same time, I could see a Hurricane flying out and away in a wide sweep, turning to come into the flight path of the Messerschmitt.

“I was expecting there to be a burst of machine-gun fire but nothing happened and he just kept on coming and closing the gap all the time.

The timing of this manoeuvre was perfect and the tail broke off the German plane, but so too did part of the Hurricane wing.

“The Messerschmitt dived straight to the ground and then a huge column of black smoke rose up from the next field from me, and where the Hurricane was now a blazing inferno with the pilot lying some 20-30ft away from the burning wreck.”

He added: “Later, we found one of his flying boots in the field and this hung in the barn for many years as a sad and rather poignant reminder of his bravery.”

The Me 110 had struck the ground and disintegrated, while the Hurricane hit a large oak tree. Liensberger, his gunner Albert Kopge and Percy Burton all lay dead.

Another labourer, David Cottington, discovered Burton’s body face down in an adjacent ditch. He was later interred at St Andrew’s Church near RAF Tangmere, Sussex.

The two German airmen were buried in Hailsham’s town cemetery with military honours. After the war ended, their remains were exhumed and buried elsewhere. 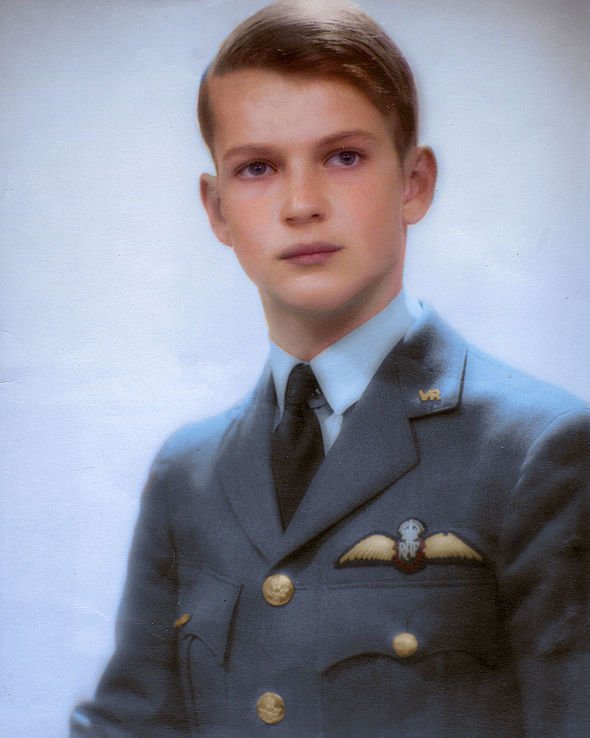 But what exactly had happened in the final seconds of the aerial duel? It was widely believed Burton’s actions had been a deliberate act of ramming.

At the time, aerial ramming was considered a legitimate tactic if all else had failed but it was highly risky and could end in the attacker’s death.

Out of ammunition and possibly wounded (there were claims his body was riddled with bullets), Burton seems to have calculatingly severed the Messerschmitt’s tail to prevent its escape.

In so doing, he had been too low to recover from the collision or escape by parachute – something he would almost certainly have realised as the two aircraft collided.

In short, he probably knew that in taking down the enemy plane, he was also sacrificing his own life.

Burton, who was 23 when he died, was soon accorded hero status for his brave and selfless deed.

It stated: “The RAF pilot appeared to ram his opponent deliberately.

Spectators of the incident heard fierce machine-gun fire overhead before the two aircraft – the Nazi one an Me 110 – dived steeply from the clouds almost down to the housetops.

The Nazi pilot attempted to make off when his opponent, after circling part of the town, appeared to ram the Messerschmitt deliberately.”

Documents from the time show careful consideration was given by military commanders as to how to acknowledge Burton’s bravery.

At the same time, thought was being given to how to recognise the gallantry of another officer from the same squadron, Flight Lieutenant James Nicolson who, on August 16, despite being about to evacuate his burning plane, instead attacked an enemy aircraft. 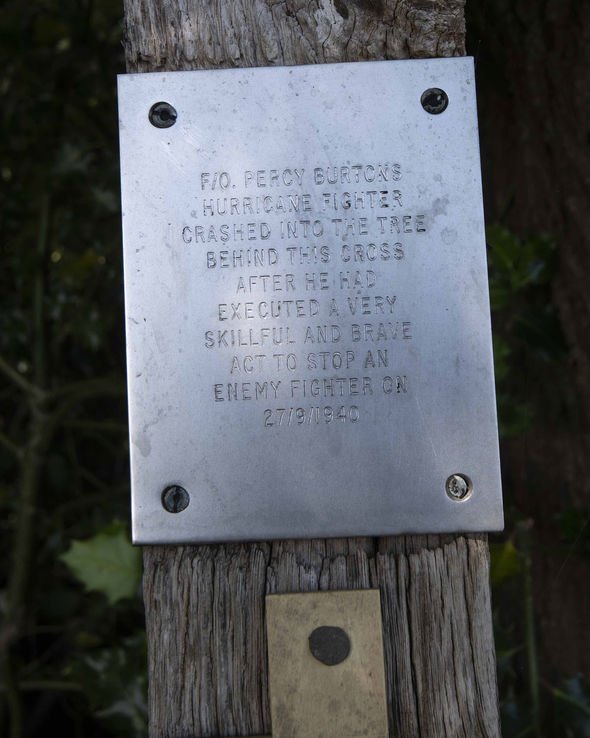 Nicolson, who was badly burned during his action, was awarded the VC (the only one for the Battle of Britain) while Burton was Mentioned in Despatches.

As a result, his name slipped into obscurity. Yet in correspondence to his superior officer, an Air Raid Precautions officer at Hailsham, wrote: “I confirm the statements of the Head Warden that it is the general opinion of all who witnessed the occurrence that the act of gallantry performed by Pilot Officer Burton should be suitably rewarded.”

He also confirmed Burton’s aircraft was out of ammunition. A reply sent on behalf of 11 Group commander Air Vice Marshal Keith Park stated: “I thought you would like to know that I have recommended this pilot for a posthumous decoration and I very much hope that this will be awarded in due course.”

That could only have been the VC. Today the tree Burton’s Hurricane struck is still standing. In front is a cross bearing a plaque that reads: “F/O Percy Burton’s Hurricane fighter crashed into the tree behind this cross after he had executed a very skilful and brave act to stop an enemy fighter.” So why was the VC denied?

Cynics might speculate a live VC winner was of greater “value” to the nation’s war effort than was a dead one? Perhaps the act of ramming an enemy aircraft was deemed to lack the glory usually associated with the Victoria Cross?

Perhaps there were doubts the ramming was an error rather than a deliberate act? Andy Saunders, a military historian who specialises in aviation and has investigated Burton’s death, said: “To the people of Hailsham, Percy Burton will always be a hero.

That nothing aside from a Mention in Dispatches was forthcoming may have been due to the fact James Nicolson had already been put forward for a VC and that two VCs perhaps couldn’t be seen to be awarded to the same squadron.”

The truth is that we shall never know for certain what happened in those fateful final seconds before the collision – nor indeed exactly why Burton was not awarded the VC.

My own interest in gallantry medals spans well over half a century and I have long concluded their award, whether by Britain or other nations, is an imperfect “science”.

As such, we have to accept that every VC recipient is a hero… but not every hero is the recipient of a VC.

Lord Ashcroft KCMG PC is an international businessman, philanthropist, author and pollster. For information about his work, including his six books on bravery, visit lordashcroft.com or follow him on Twitter and Facebook @LordAshcroft.