Just over two decades ago, Baz Luhrmann reinvented the movie musical when he created bohemian Paris in the sound stages of Sydney’s Fox Studios.

Rick McGill was part of the behind-the-scenes costuming crew that created Moulin Rouge! over an exhausting shoot. 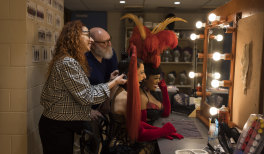 In the WHAM room: (from left) Kylie Clarke and Rick McGill work on Christopher Scalzo, who plays Babydoll, and Ruva Ngwenya, who plays La Chocolat.Credit:Anna Kucera

Ask him what he remembers about working on what became a global hit, winning two Oscars, and the first thing that springs to his mind is the high-spirited wrap party, when everyone finally had time to breathe. But even better was how well all the turbans and hats he and the rest of the millinery team created were showcased.

“They were onscreen for such a long time,” he says. “It was amazing.”

Now McGill has returned to Paris for the Tony award-winning stage version Moulin Rouge! The Musicial, which opens in Sydney on Saturday after a sellout season in Melbourne.

Fellow crew member Kylie Clarke has also gone from the film to the musical – after being part of the original hair and make-up team.

While she also loved the wrap party, her fondest memories of the shoot are the brilliant creativity of designer Catherine Martin and the sheer hard work as the perfectionist Luhrmann pushed and kept pushing for excellence from his crew and cast.

“It was relentless and exhausting,” Clarke says. “But you look at it on screen – I was incredibly proud.”

McGill and Clarke are talking to The Sydney Morning Herald in what’s known as the “WHAM room” – for wigs, hair and make-up – deep in the Capitol Theatre before one of the musical’s previews this week.

And, needless to say, the show has a lot of WHAM. 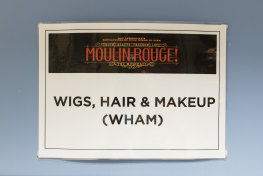 Where the magic happens: Behind the scenes at Moulin Rouge! The Musical!Credit:Anna Kucera

“We’re all instantly transformed,” says Christopher Scalzo, who plays Babydoll, as his stylish black bob and ornate head-dress are zhooshed before a performance. By instantly, he means 90 minutes in costume, hair and make-up before every show.

“It’s any actor’s dream to be able to transform so enormously from our natural selves to the show version,” Scalzo says.

To go from hit film to hit musical, the Moulin Rouge! story has been compressed and made more vibrantly sexy, characters have evolved, new dance routines have been added, sets have been reworked and contemporary music has been introduced from the likes of Lady Gaga, Beyonce, Rihanna, Sia and Lorde.

For the WHAM team, the stage requires a very different approach to creating even an ornate feathered head-dress for the heroic courtesan Satine (Alinta Chidzey) or a mauve top hat for the villainous Duke (Andrew Cook). 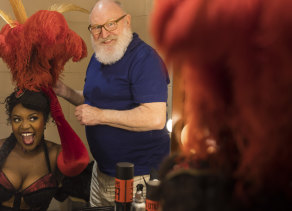 Rick McGill with Ruva Ngwenya before a show.Credit:Anna Kucera

“Your detail has to be really fine on film because you never know when the camera is going to come in and pick up something,” McGill says, “whereas in stage it’s more blocks of things.

Early on, Clarke says, the backstage team watched the musical from all around the theatre to see how the designs would look to the audience. Not only do their costumes, hats and wigs have to be appreciated from the back row, they have to be robust enough to withstand eight performances a week.

But there is another side to the WHAM team’s work – helping performers to create the characters they are playing.

For Ruva Ngwenya, who plays La Chocolat, that means getting a bold red-and-black look that includes fishnet stockings, long gloves and a feathered head-dress that juices up an early version of Lady Marmalade.

“It’s all absolutely beautiful,” she says. “And even more special because it embraces our natural aesthetic, and what we look like in real life is celebrated.”

Says Clarke: “Almost every performer sits in the chair when they do a final wig fitting and they’re like, ‘oh my goodness, I can find my character’. The costumes and the wigs, those elements almost seal the character in for them.”

It’s a big weekend for Luhrmann in Sydney, with Moulin Rouge! The Musical opening at the Capitol on Saturday and Elvis premiering at the State Theatre on Sunday. 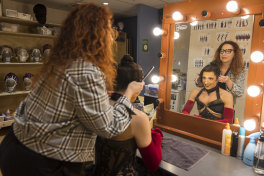 And while you would expect everyone on the musical to be getting more nervous as opening night approaches, Ngwenya says the previews have helped them relax.

“It gets more grounded the closer we get to opening,” she says. “Everyone is solidifying their tracks and what needs to happen and how everything is feeling on stage, so it gets calmer and calmer.”

When the show starts, fans of the film will find it both familiar and new as young songwriter Christian (Des Flanagan) ventures into the seductively decadent Moulin Rouge nightclub and falls for Satine.

Even without George Michael, it’s a musical that features the best of WHAM – the room, that is.