Bernie Sanders unintentionally stole the spotlight at the presidential inauguration Wednesday, and he did it with a pair of patterned mittens.

Eagle-eyed Twitter users spotted the distinct hand accessory and made it a point to share their thoughts and jokes about the Vermont senator’s fashion choice.

“Bernie Sanders showed up to the #InaugurationDay proceedings looking like a man who was preparing to shovel the driveway, a man who was about to get into his Subaru Forester and head to the grocery store. Iconic,” New York Magazine’s fashion vertical The Cut joked in a tweet. 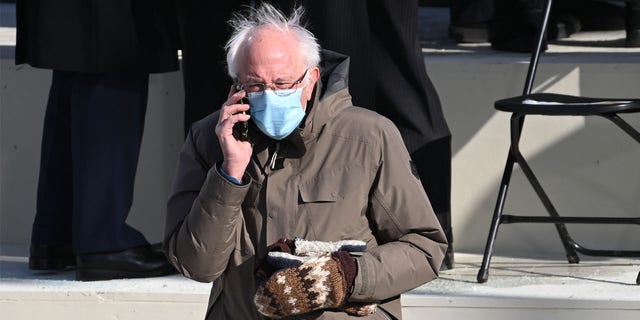 Vermont Senator Bernie Sanders arrived for the 59th Presidential Inauguration at the U.S. Capitol for President-elect Joe Biden in Washington, D.C. with his signature mittens. (Saul Loeb/Pool Photo via AP)

While other Twitter users poked fun at Sanders’ mittens, some took time to commend the 79-year-old for his practical attire.

“I see everyone mocking Bernie’s ‘grandpa at the post office’ vibe today but those mittens are clutch,” wrote Grace Segers, a political reporter for CBS News.

“Bernie rolling up solo in his ONLY coat with a manila envelope under his arm and fair trade mittens all the way on is BIG GRASSROOTS ENERGY,” tweeted a junior mail clerk who goes by the mononym Fred. “This man, a real one, clearly did not come for the pomp and circumstance.”

However, Sanders’ viral mittens have a deeper story that spans more than two years.

According to BuzzFeed Political Reporter Ruby Cramer, the mittens made a regular appearance while Sanders was on the campaign trail for his own presidential run.

The mittens were reportedly made by Jen Ellis, a teacher from Essex Junction, Vt., who created the sustainable gift out of repurposed and recycled materials.

Ellis took a moment to confirm she made Sanders’ mittens hours after the senator went viral.

“I made Bernie’s mittens as a gift a couple years ago,” Ellis wrote in a tweet. They are made from repurposed wool sweaters and lined with fleece (made from recycled plastic bottles).” 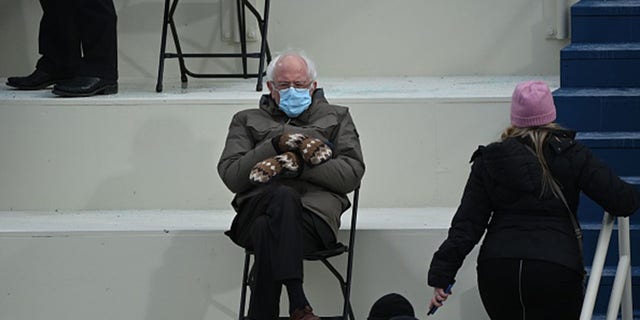 Bernie Sanders’ mittens were made by Vermont schoolteacher Jen Ellis. He wore the gifted accessory during Joe Biden’s inauguration on Jan. 20, 2021.
((Brendan Smialowski/AFP via Getty Images))

As for the senator in question, Sanders took his headline mitten moment in stride.

“In Vermont, we dress warm – we know something about the cold. And we’re not so concerned about good fashion,” Sanders told CBS This Morning’s Gayle King with a laugh. “We want to keep warm. And that’s what I did today.”

The weather in Washington, D.C. was 44 degrees Fahrenheit on the morning of Inauguration Day, according to data from AccuWeather. The sustained wind speed was 19 mph while wind gusts were 35 mph.