The 14-hour training, which complied with Federal Aviation Administration regulations, was split between two days, Lanius said. It consisted of classroom instruction, demonstrations and practice in a training capsule.

At the end of training, the astronauts go over five different scenarios and take a final exam, Lanius said.

Arian Cornell, director of astronaut sales, said the training takes astronauts through how enter, exit and maneuver in the capsule once in space. 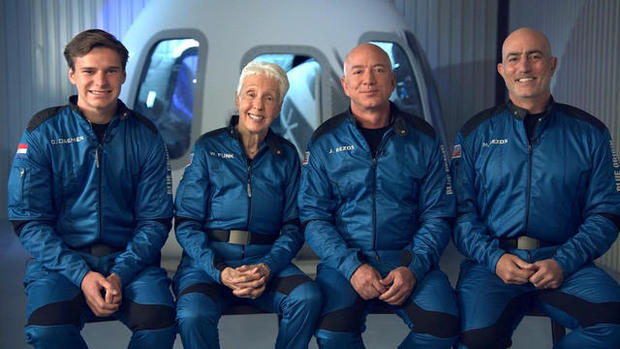 Blue Origin says it screens all astronauts are before flights and they must meet several functional requirements.

They must be able to climb up the launch tower – about seven flights of stairs – in less than 90 seconds. And they must be able to walk quickly across uneven surfaces, such as a ramp or a deck with occasional steps, according to the company.

They also have to fasten and unfasten their own seat harness in under 15 seconds, “which is about as difficult as fastening the seat-belt in an unfamiliar car in the dark,” Blue Origin says.

In addition to hearing and understanding instructions in English and reliably following instructions, astronauts need to be able to “experience up to five-and-a-half times one’s normal weight (5.5gs) pushing the Astronaut into his/her seat for a few seconds during descent into the atmosphere,” Blue Origin says.

They also have to be able to sit strapped in a seat for 40 to 90 minutes without getting up or going to the bathroom and spend that amount of time with up to five other people.

All Blue Origin astronauts must also be 18 years old or the age of majority in their country of residence, whichever is older, according to Blue Origin.

Eighteen-year-old Dutch student Oliver Daemen became the youngest to fly in space after the anonymous winner of an online auction, who bid $28 million to board the flight, was unable to make the launch. This is the first Blue Origin flight with a paying customer, Cornell said during the news conference.

Blue Origin will provide training for all astronauts participating in a flight. The company says training may occur at its facilities in Kent, Washington, in Culberson County, Texas, or another location.

“Every mission we’ve conducted so far has prepared us for putting humans onboard,” Lanius said during the press conference. “During our last mission, we rehearsed putting customers on a fully fueled vehicle for the first time.”

Tuesday’s flight was the 16th successful test flight of a New Shepard spacecraft, the third for this booster and capsule, and Blue Origin’s first with passengers on board. The company plans to launch two more passenger flights before the end of the year.