No one can hold a grudge quite like a Real Housewife. From the East Coast to the West Coast, every Housewife series has an iconic feud (or five) that leaves fans forced to pick sides.

With multiple Real Housewives franchises hitting over 100 episodes, there are too many feuds to include, but some iconic disputes that deserve an honorable mention include RHONY’s Kelly Bensimon vs. Bethenny Frankel, RHOD’s LeeAnne Locken and D’Andra Simmons, RHOA’s Cynthia Bailey and Porsha Williams, and RHOC’s Heather DuBrow and Gretchen Rossi (Malibu Country, anyone?).

Scroll through for an update on where some of the biggest Real Housewives feuds — including Bethenny vs. Jill Zarin and Lisa Vanderpump vs. Brandi Glanville — stand today: 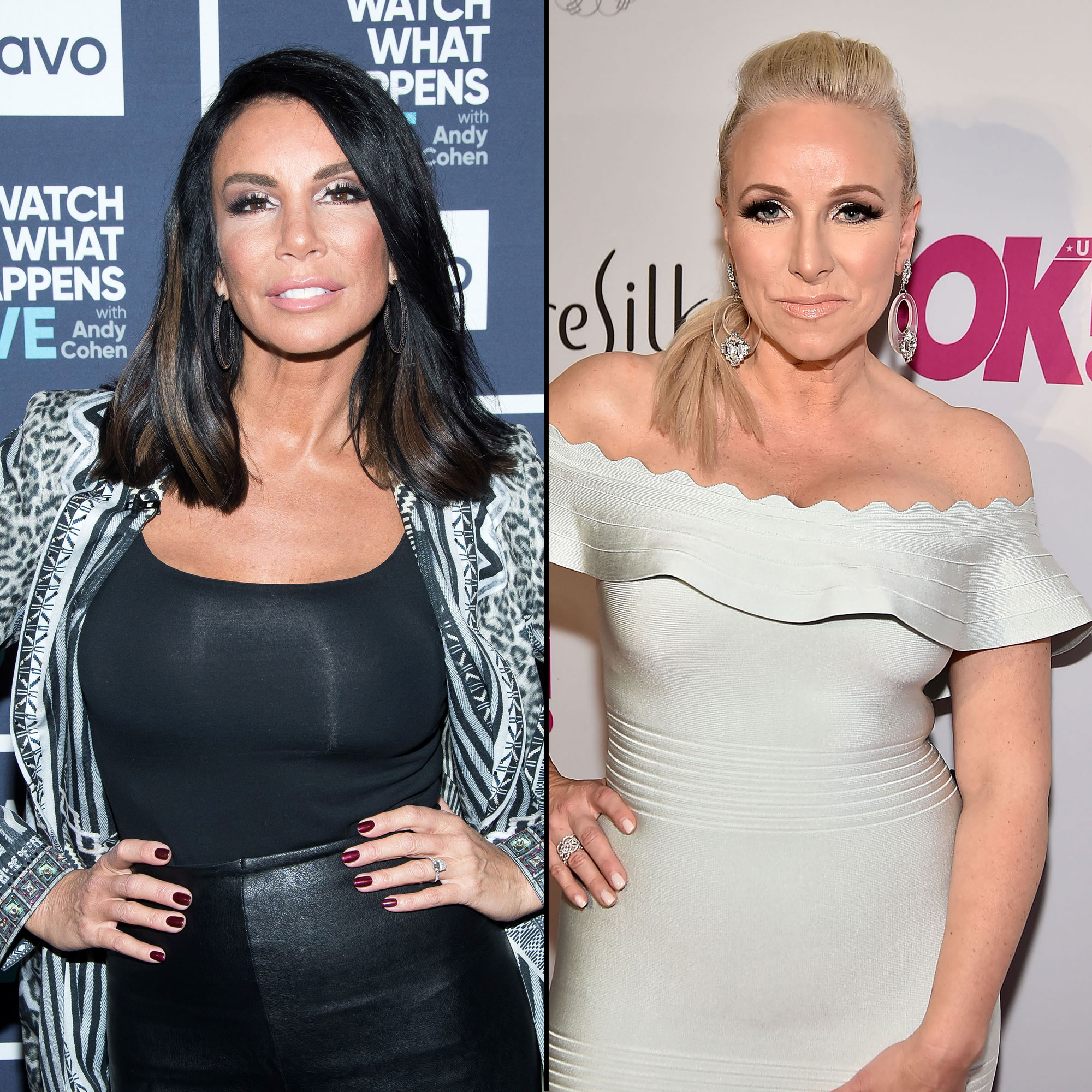 After becoming fast friends during season 8 of RHONJ, Danielle and Margaret’s relationship started falling apart after The Naked Truth author asked Margaret to be a bridesmaid in her wedding to Marty Caffrey during season 9 in 2018. The two women argued leading up to Danielle’s wedding after Margaret accused her of acting like a bridezilla. Their feud heated up during the cast’s trip to Cabo when Danielle accused Margaret of not spending time with her kids. As a result, the two women got into a heated argument and Margaret threw a glass of red wine at Danielle. Hotel security had to be called.

Where They Stand Today: Margaret made it clear during a January 2019 appearance on Watch What Happens Live With Andy Cohen that the twosome are no longer friends. “It goes below the belt. She talks about my children, about my family,” she explained about their Cabo fight. “She needed to cool off. Seriously. I don’t even drink, so I had to grab Dolores [Catania]’s wine and just throw it right in her face. On her rented dress, you know?” 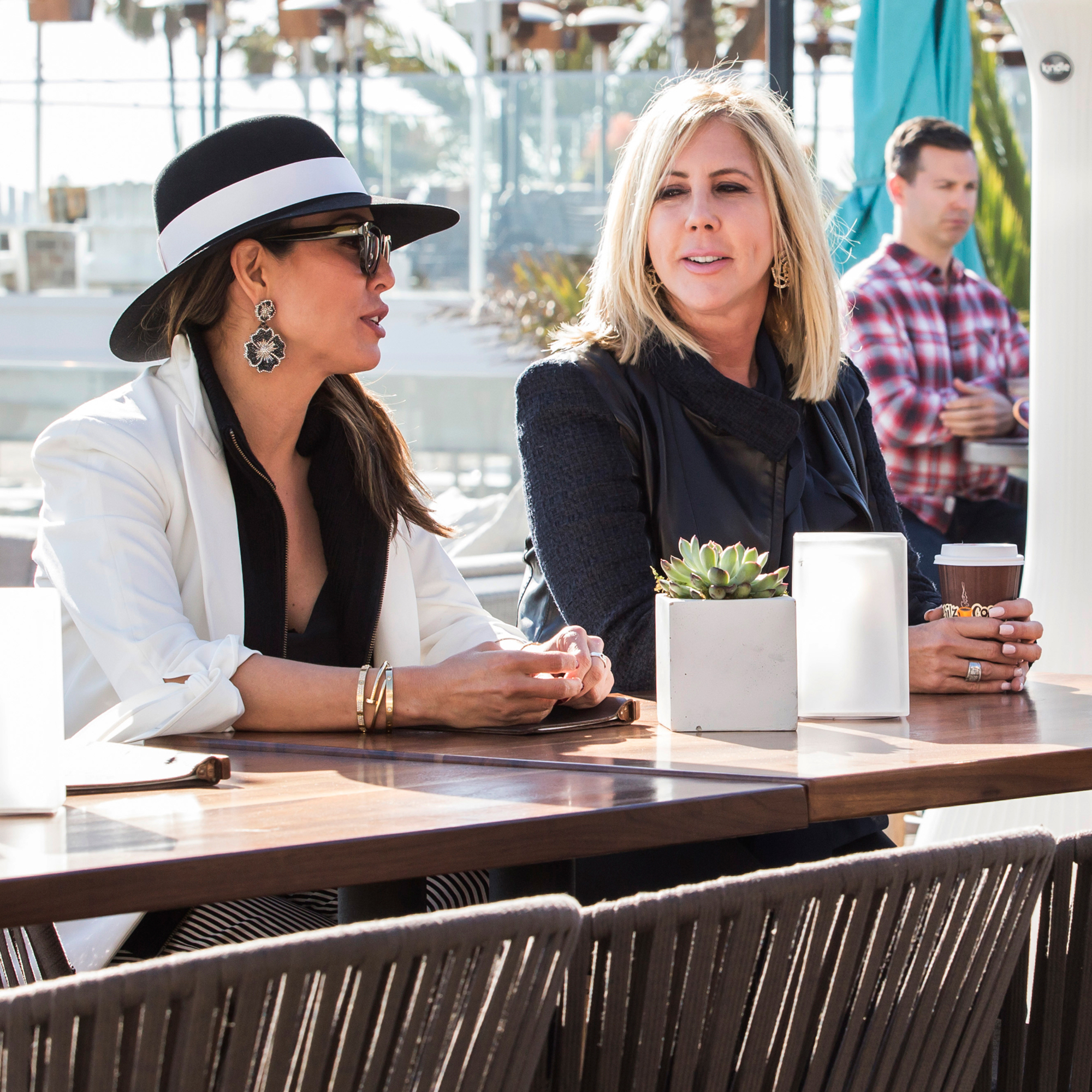 Vicki and Kelly became fast friends after the latter joined the series for season 11, but their relationship became strained during season 13 after Kelly accused Vicki and Vicki’s boyfriend, Steve Lodge, of playing matchmaker for her ex-husband, Michael Dodd. While Vicki attempted to downplay her role in Michael’s love life, she did reveal she and Steve went on double dates with Kelly’s ex and his new girlfriend. During the season 13 reunion, Kelly stormed off stage after Vicki suggested Kelly did cocaine.

Where They Stand Today: While Kelly and Vicki made up during the season 13 reunion, Kelly backtracked after Us Weekly’s exclusive trailer for the special aired and claimed she would leave RHOC if Vicki was a part of the show because of the drug comments. “If they don’t do something to Vicki how could I go back … I’m not going to sell my soul for this ratchet liar!” Kelly replied to a fan in November 2018 via Instagram. “They [are] running that show to the ground and hurting people’s reputation and my brand !!” The following month, Vicki clapped back in a since-deleted tweet, claiming that Kelly would remain on the show because has “no job or career.” In response, Kelly called Vicki “jealous.” 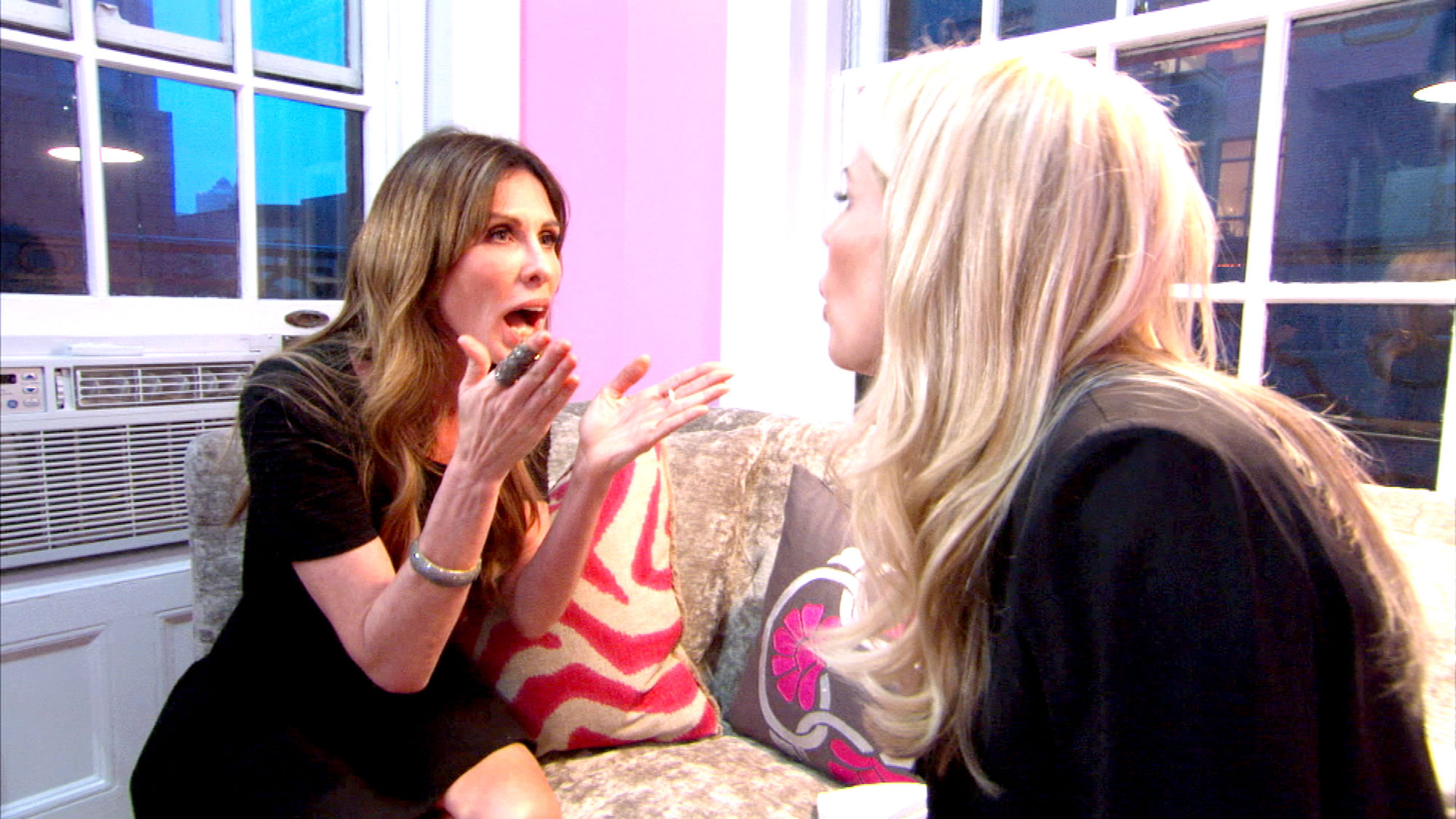 Use your vocabulary, writer girl! While Aviva fangirled over Carole and her 2005 memoir, What Remains, during season 5, she changed her tune during season 6 and accused Carole of using a ghostwriter. The two never saw eye to eye again on the series and Aviva exited the show after book-gate in 2014.

Where They Stand Today: Aviva slammed Carole again in May 2018, calling her “strategic” and “extremely contrived” during an appearance on the “The Reality Rundown Podcast.” Opens a New Window. The Leggy Blonde author then claimed Carole was still a part of the series because of her friendship with Andy Cohen. “Let me make it clear why Carole is 100 percent on the show. She is best friends with Andy for many many years. That’s a political game over there,” she alleged. “She’s positioned herself and made herself popular on social media. She’s very well set up over there where she really doesn’t have to do anything.” Carole and Cohen never publicly replied, but the WWHL host did deny Aviva’s claims that she was forced to drink on the show in June 2018. 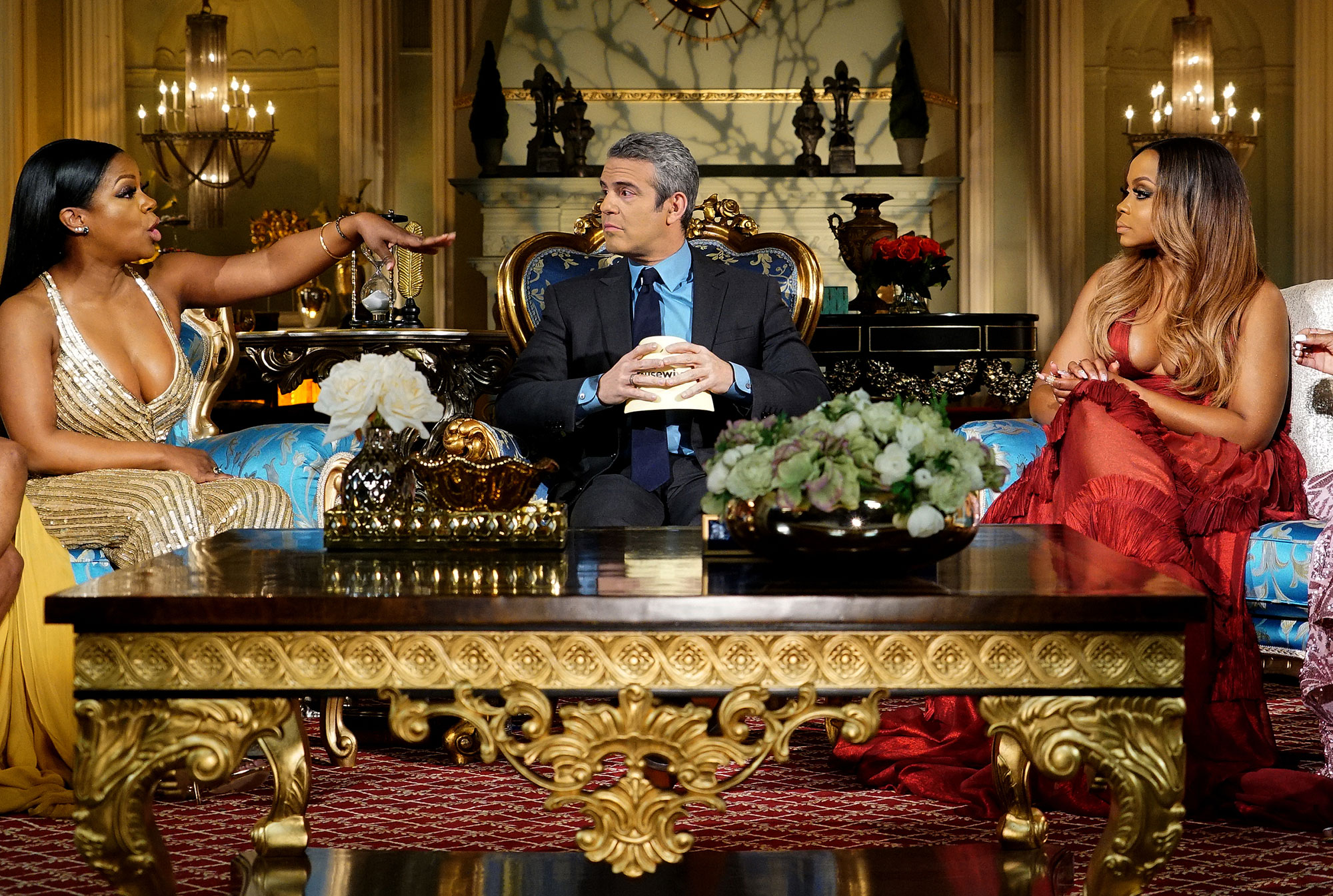 Phaedra and Kandi’s friendship suffered after the lawyer accused the musician of not being supportive during her split from husband Apollo Nida during season 8. The former friends argued over Kandi storing Apollo’s motorcycles in her garage and Phaedra’s decision to not let her two sons visit Apollo in jail. The following season, Kandi accused Phaedra of cheating on Apollo before his sentence started. Their feud erupted, however, during the season 9 reunion after Phaedra admitted that she was the one who told Porsha Williams about Kandi and husband Todd Tucker‘s alleged plan to drug Porsha and have sex with her. (A rumor Kandi denied.) “I repeated it because I heard it. Something was brought to me. I just repeated it. I repeated what someone told me,” Phaedra tried to explain to an understandably upset Kandi. “I’m not saying I didn’t say it. I’m saying I repeated it.”

Where They Stand Today: Phaedra was fired from RHOA after the drug allegations and Kandi made it clear she had no intentions to ever befriend her again during a January 2018 appearance on WWHL. “Nope! Nope and Nope. … Haven’t seen her, haven’t talked to her, haven’t heard from her,” Kandi told Andy Cohen about her former costar. 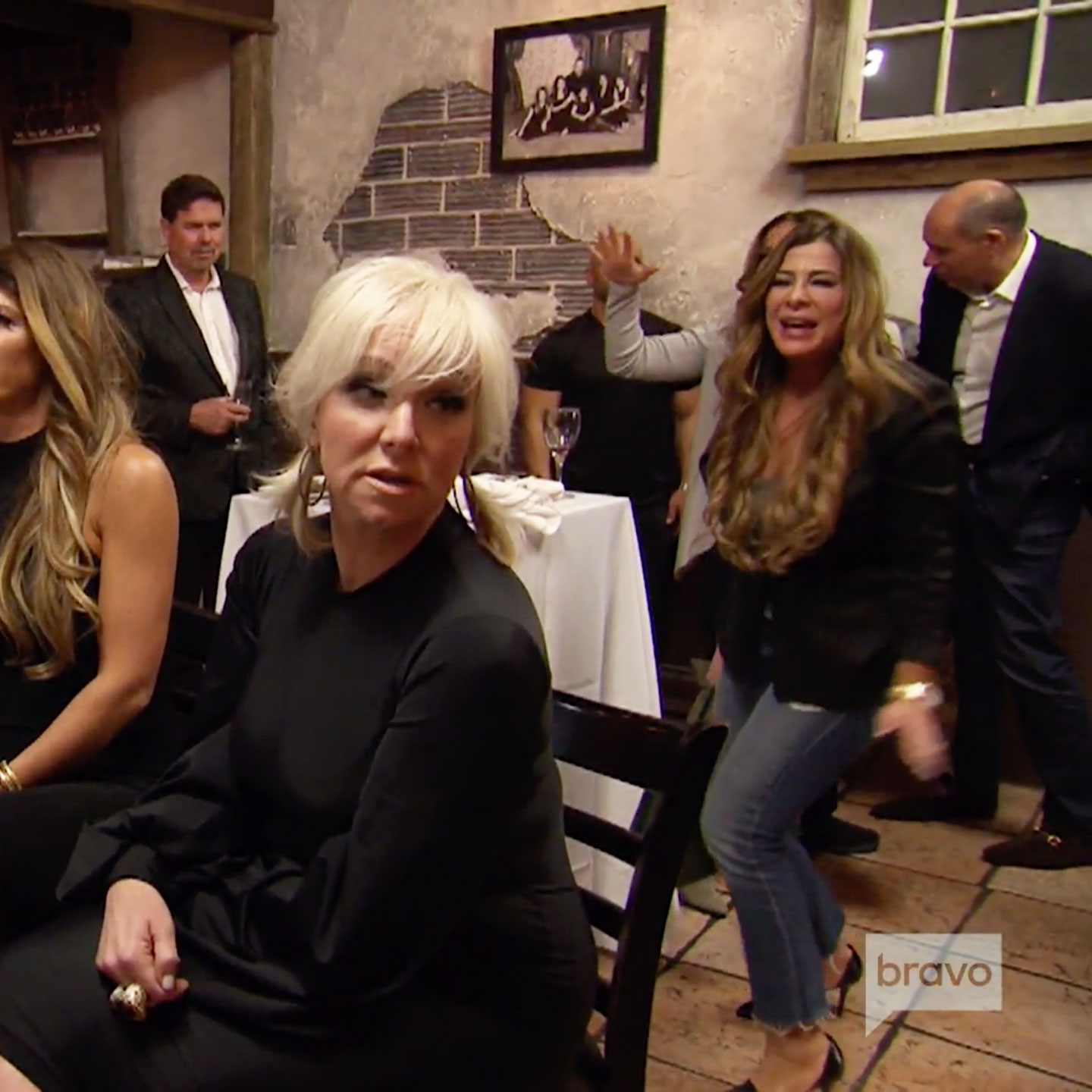 While Siggy technically introduced Margaret to the group during season 8 of RHONJ, the friendship between the two women was fleeting. After struggling to find common ground throughout the season, their relationship hit its lowest point after Siggy accused Margaret of being anti-Semitic for making a reference to Adolf Hitler. “But Siggy, Hitler would have not killed me. Does that make him a good person?” Margaret asked the relationship expert during a conversation about befriending someone who speaks badly about your other friends.

Where They Stand Today: Despite Margaret’s multiple attempts to reconcile, Siggy announced her departure from RHONJ before the season even finished airing. Months later, Margaret revealed she and Siggy are still not on good terms. “I ran into her at my hair salon and she was appalled when I walked in. She was like, ‘Oh!’” the designer told Reality Blurb Opens a New Window. in November 2018. “She’s not over it! … I’ve seen her, but we aren’t speaking.”