LONDON (Reuters) – Seventy-five years ago, a young British sailor stood on the bridge of a warship, its gun barrels pointing out to the coast of France and watched the devastation being rained down on a country he wanted to liberate. 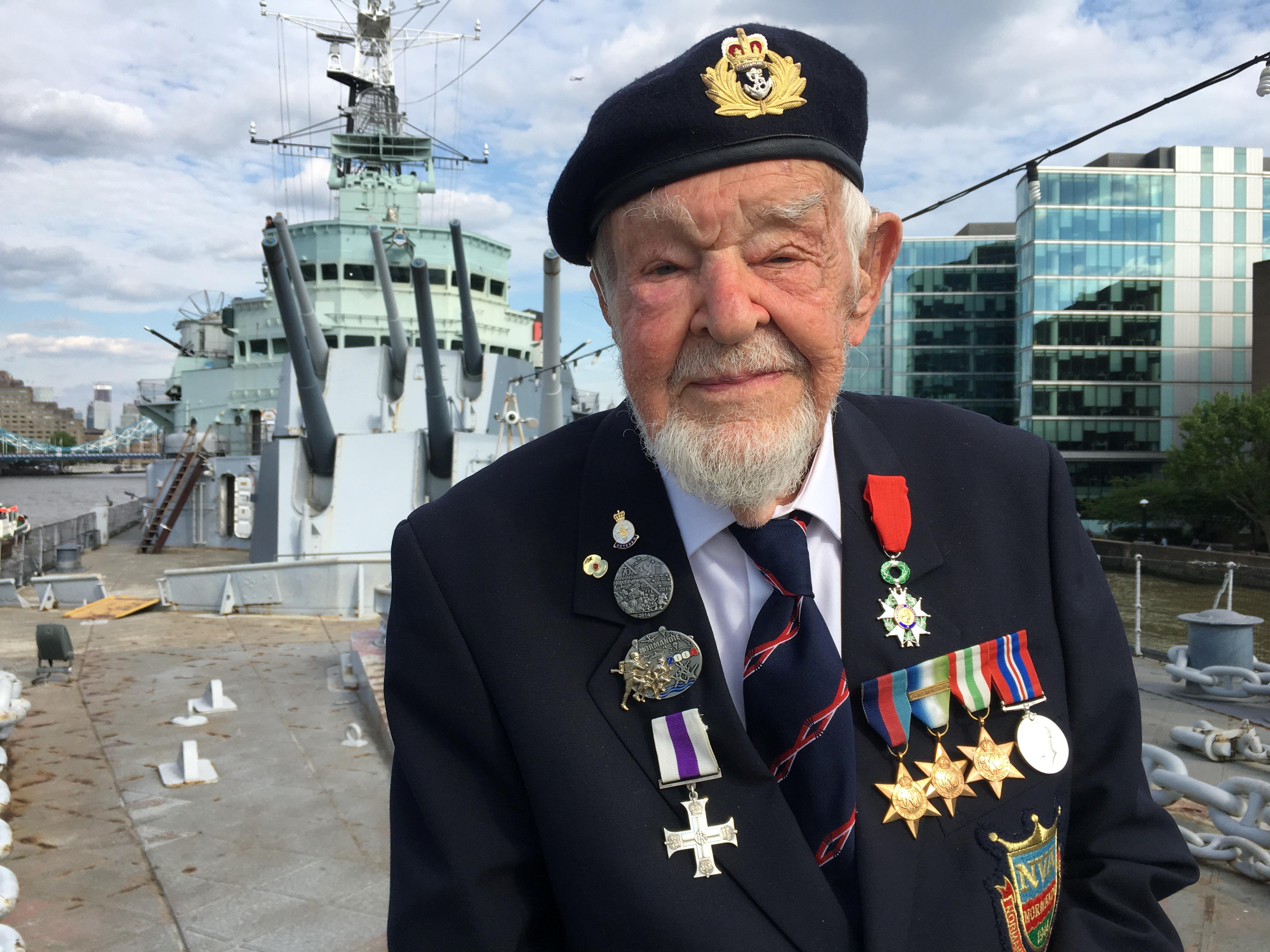 Today, Richard Llewellyn, 93, is among the dwindling number of veterans of the Allied D-Day invasion of Normandy – an operation that turned the tide of World War Two and marked the beginning of the end of the conflict.

The invasion of France is usually told as the story of brave, young men struggling across beaches and fighting their way inland. However, another battle unfolded at sea that day, between the Allied ships and the massive German coastal guns.

Llewellyn describes the thunderous explosions rolling along the shore as every ship in the Allied fleet was blazing away. The enormous firepower sent shells pounding into the cliffs, churning earth, rock, and entire landscapes.

All the while the German battery guns blasted back. The men on the boats could hear the scream of the shells as they passed overhead. The engines of the bombers above added to the concussion of noise. Dead bodies floated in the sea.

Llewellyn compares the scene to watching a spectacular firework display. The warship guns belched out enormous orange balls of flames and mustard colored smoke. Some of the battleships fired 16-inch shells, almost as heavy as a car, and so big they could be seen as they went past.

“The noise was just unbelievable. One of the things that I remember afterwards more than anything else was the noise,” said Llewellyn, who was 18 at the time, and a midshipman on HMS Ajax, which was a light cruiser in the British navy.

“If you go to the cinema and you hear a lot of noise and gunfire and so on, it doesn’t really register. But if you are actually there the whole air is vibrating all the time.”

The assault by almost 7,000 ships and landing craft along a 50-mile stretch of the Normandy coast remains the largest amphibious invasion in history.

In the decades since, the invasion has become a touchstone for the leaders of Britain, the United States, France and other western countries who will gather in Normandy next month to invoke the heroism. The event will take place as the trans-Atlantic relationships that D-Day forged are fraying.

Differences over military spending for the NATO alliance, disagreements over how to approach the Chinese telecoms giant Huawei and Britain’s decision to leave the European Union have raised tensions in the decades-old alliance.

These concerns are a far cry from the epic mobilization of military machinery and manpower that resulted in the invasion of France in 1944. Then, tens of thousands of men piled into ships and planes to cross the English Channel.

Llewellyn, who has a white goatee and is smartly dressed in a navy jacket and beret for his interview on the HMS Belfast in London, is eloquent and perfectly recalls the events that day. He effortlessly climbs the ship’s steep steps without help.

He said the mood among the men as they crossed the sea was more anticipation than fear or tension.

“It was exciting,” he said. “We were far more patriotic in those days than we are now. We knew that the Germans had to be defeated and anything had to be done to make it possible.”

He dismisses the idea that people were praying or savoring their last meal as the invasion began.

“We weren’t Americans, I am afraid,” he said with a chuckle.

Although only a teenager, his experiences living through the German bombardment of London, known as the Blitz, meant he was familiar with being bombed.

On D-Day, Llewellyn’s ship was engaged in a duel with German gun batteries, particularly those at Longues-sur-Mer, nestled high on the cliff tops, situated between where British and American troops were landing on the Gold and Omaha beaches.

In what was perhaps one of the most accurate or luckiest shots of the war, his ship situated a few miles offshore, scored a direct hit, landing a heavy shell through the narrow slit of one of the fortifications.

On the bridge of the ship, Llewellyn watched the invasion through binoculars as the haze of smoke shrouded the shore.

As his ship continued to shell the German positions it faced its own threat from mines, shelling, and the Luftwaffe, the German air force.

At one point, a German plane dropped a bomb that landed just a few meters from his boat. The explosion winded him and sent the ship violently swaying from side to side.

“I suppose it was in a way,” he said with typical understatement.

Llewellyn survived the onslaught and the Allies conquered the coastline. He plans to attend the D-Day anniversary in Normandy next month. 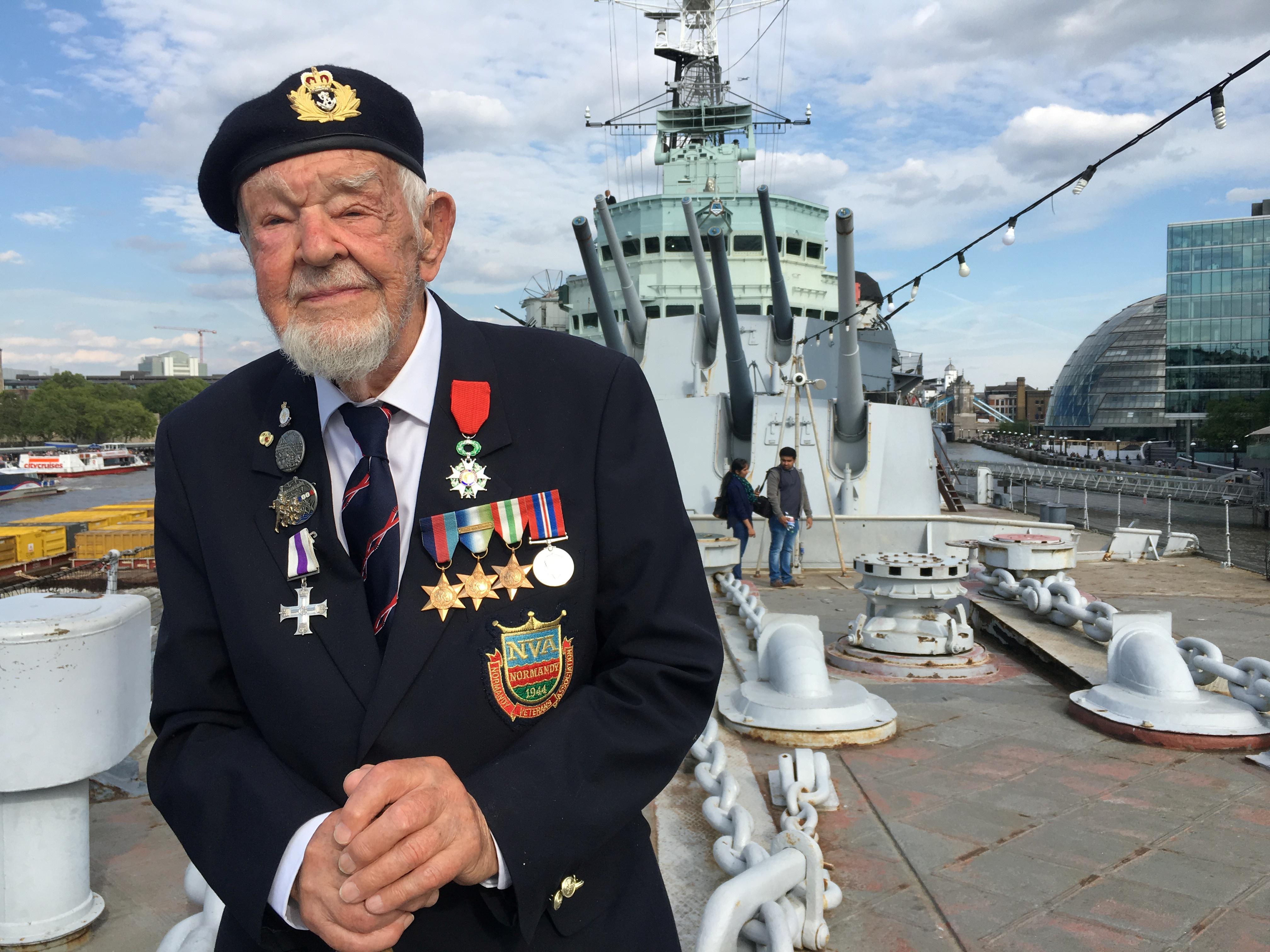 He has been back several times and says it is an emotional experience, particularly visiting the graveyards.

But he also feels guilty about the destruction caused to France, particularly as the navy began firing shells at targets further inland, some of which fell in nearby villages.

“The ordinary citizens come up and say how grateful they are. I found that quite difficult to take actually. I don’t feel that we had done anything special, especially for them,” he said. “Their homes were knocked down by shells and troops. Unfortunately, war leaves a lot of destruction.”